Residents of Cornwall are furious after folklore was unearthed suggesting clotted cream was invented in Devon.

Officials in Devon claim the dairy product – then known as ‘clouted cream’ – originated in the county in the 9th century.

It is claimed if true it would put an end to the jam or cream first on scones debate and should be done the Devon way – cream first.

The discovery was posted on the website of Dartmoor National Park. The story dates back as far as the 9th century in medieval British history.

The folklore tells of a wife banished to a cave who saves a shipwreck. Its grateful captain then shares with her a recipe for ‘the most wonderful food you have ever tasted’. She then takes the recipe for ‘clouted’ cream back to her Devon home. 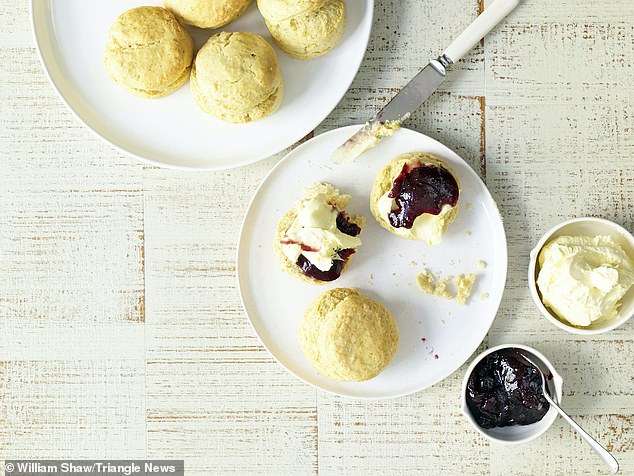 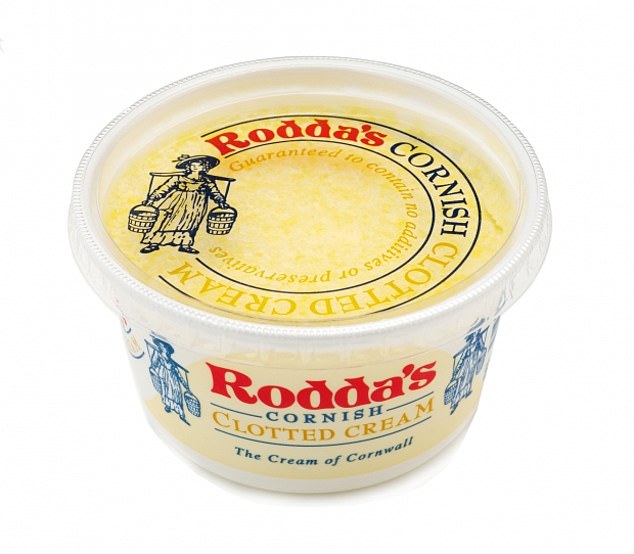 Officials in Devon claim the dairy product – then known as ‘clouted cream’ – originated in the county in the 9th century, and not in Cornwall. Pictured: Cornish clotted cream

The claim was met by a mixed reaction in Devon and Cornwall today.

Stewart Gibbard tweeted: The best clotted cream only comes from Devon, trust me’

Joe Cartwright wrote: ‘Bit of history for you!!!! Straight outta Dartmoor….. That’s in Devon so the correct way is the devonshire way my cream tea confused friend.’

Steve Brice said: ‘Hah !! I knew it was a Devon thing **.’ and Kevin Winter said: ‘Yeah so Sod off Cornwall clotted cream is ours.’

The folklore states that the first king of England, Brutus of Troy, set sail for the island then known as Albion and landed at Totnes in South Devon.

Here Brutus and his men took on the ‘giants’ of Albion, and when they won Brutus became King and named the country Britain after himself. 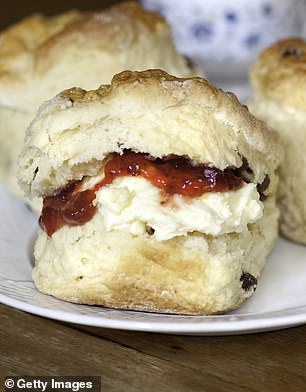 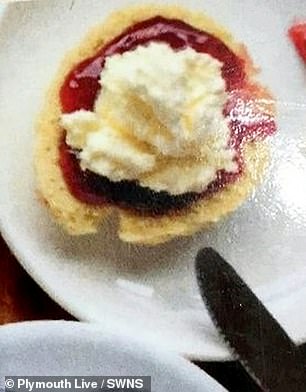 Pictured, left, how people in Devon like their scones and, right, the Cornish method

When the giants had been driven out by Brutus, many made their homes on Dartmoor while the rest fled even further, into Cornwall.

Blunderbus had four wives, the youngest and prettiest of which was Jennie – the giant’s favourite wife.

Jennie made the older three wives bitter and jealous, and they made Blunderbus’ life hell until he was forced to send her away, the story claims.

But he did not banish her far – he set her up in a cave in the Cornish cliffs, where he could visit her frequently.

The story says she overheard Cornish men plotting to wreck a ship. After alerting the crew to the danger by setting driftwood ablaze and floating it out to see.

The ship, realising the danger, dropped anchor and sent a boat inshore to investigate. When Phoenician captain of the ship realised what had happened, he was so grateful to Jennie that he asked what he could do for her in return.

And when she shared her story, he realised she would only be happy with her beloved Blunderbus, and vowed to share with her a recipe for ‘the most wonderful food you have ever tasted’.

The recipe was for clotted cream – or ‘clouted’ cream, as it was known then – and Jennie soon shared it with Blunderbus, leading to him bringing her back to live with him and his other three wives.

The jealous wives soon forgave her when she taught them the recipe for the clouted cream, and people came from all over Devon to learn about the new food and how to make it, the story claims.

The story ends: ‘Devon is still famous for clotted cream, so the next time you enjoy one of our famous cream tea’s, remember you owe it all to Jennie, the lovely young wife of Blunderbus of Dinger Tor.’

But Tracey Barnes said today on Twitter: : ‘Technically still a Cornish thing, as she was in Cornwall when the The Phoenician Captain gave her the cream… Probably shared with the Cornish locals at the same time.’