Houses shake as Cornwall is rocked by FIFTEEN ‘earthquakes’ measuring up to 1.5 in magnitude in two days caused by tests at geothermal drilling site

Residents in Cornwall have been rocked by fifteen earthquakes – in just two days.

The British Geological Survey confirmed tremors measuring up to 1.5 in magnitude have been felt in the county.

The largest of the 15 yesterday (Wed) led to reports of windows rattling. 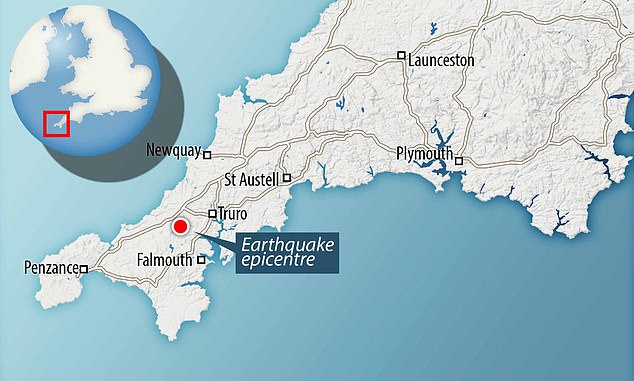 Geothermal at United Downs, near Redruth, has confirmed the reports were related to geothermal drill testing at the site.

It has now temporarily stopped operations to look into the issue and try to understand the cause.

Twitter User Mark Vanstone tweeted a graph illustrating the five separate responses measured across the local seismometer in an hour. 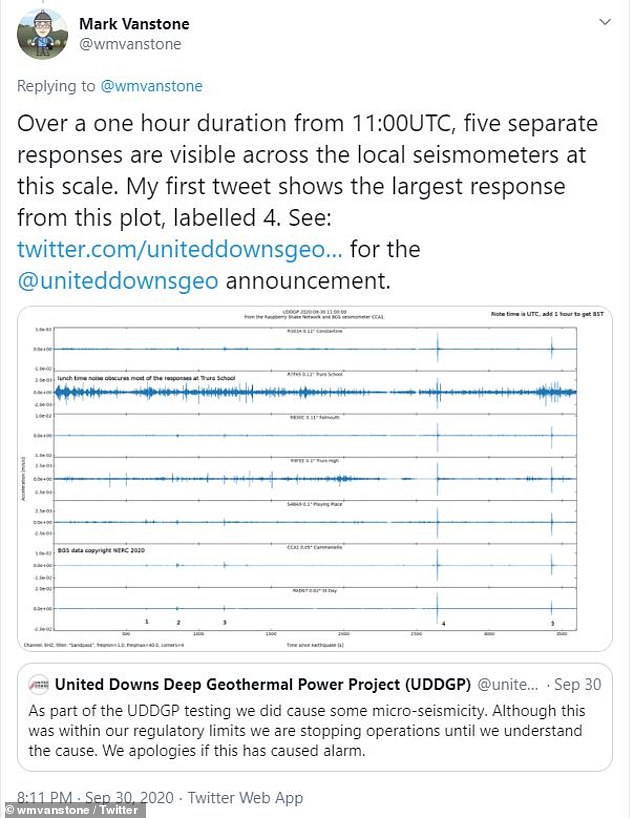 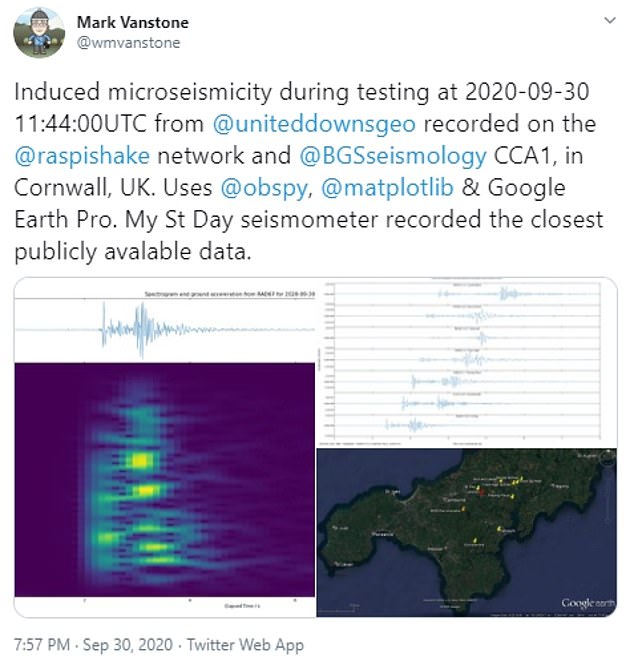 But other residents didn’t share the same level of enthusiasm of the earthquakes as Mr Vanstone.

Fe-up Vicky Calf commented on Cornwall Live’s Facebook page: ‘Not rocket science is it? Half of Cornwall is missing underground!

‘The County has been mined to death. It’s like a rabbit’s Warren under our homes. Cash cow or not if it’s going to cause damage to our homes it should stop now.

But Dr Ryan Law, managing director of Geothermal Engineering told the Mailonline: ‘These earthquakes are rare but they are to be expected with this kind of work.

‘We have always been transparent with the residents letting them know what is happening at each stage.

‘As part of the UDDGP testing we did cause some micro-seismicity.

‘Although this was within our regulatory limits we are stopping operations until we understand the cause.

‘The tremors are low scale and should not be anything to be afraid of. We apologise if this has caused alarm.

‘We were due to stop testing this week anyway and we will not resume work until early November when we will be again consulting residents before work is carried out.’

Geothermal Engineering have been working on a number of projects in the area including working on one that could become the UK’s first deep geothermal electricity plant in Cornwall.

They began drilling two wells through hot granite rock near St Day, in November 2018 the deepest of which will reach 2.8 miles (4.5km) deep and could power 3,000 homes.

The firm says the aim is to demonstrate the potential of geothermal technology to produce electricity and renewable heat in the UK. 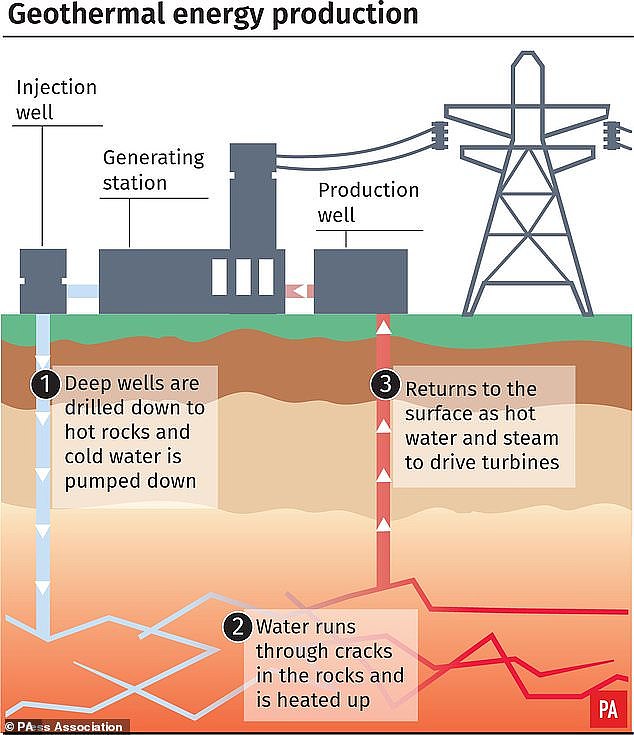 This water will be fed through a heat exchanger at the surface and re-injected into the ground to pick up more heat from the rocks in a continuous cycle. The extracted heat will be converted into electricity and supplied to the National Grid

Locals in Bedfordshire, Buckinghamshire and Hertfordshire all reported feeling the tremors – with one saying they ‘felt their whole house shake’.

Others told the British Geological Survey (BGS) it felt ‘like a convey of HGVs driving past my front door at great speed’ with others claiming ‘the house had one dramatic shake’.

HOW MANY EARTHQUAKES HAVE SHAKEN THE UK IN RECENT YEARS?

The UK is expected to have an earthquake measuring 5.0 and higher on the Richter scale about once every eight years.

Tremors between 1.0 and 1.9 are expected across the country every two-and-a-half days.

The biggest earthquake in recent years was on February 27, 2008, with Market Rasen, Lincolnshire at its epicentre. It measured 5.2 on the Richter scale and was felt across much of Britain, including in Newcastle, Yorkshire, London, the Midlands, Norfolk and Wales.

In the past five years there have been 14 earthquakes in the UK.

On February 20, 2014, the Bristol Channel experienced the UK’s biggest quake in six years, measuring 4.1 on the Richter scale.

The East Midlands were rocked once again on January 28 2015, when tremors returned to Rutland, with that year’s other quakes falling in Sandwich, Kent, four months later, when Gwynned, South Wales was also hit in separate tremors.

There were two earthquakes in one day in Moidart in the Highlands of Scotland on August 4 this year. The tremor at 3.43pm measured 3.8 and one at 3.45pm was 3.4.