Don’t go into the water! People of Cornwall are warned to stay ashore after massive SHARK is spotted swimming in harbour

The public have been warned to stay out of the water in a popular Cornwall holiday spot after a massive shark was spotted swimming in the harbour.

The 9ft-long creature was filmed close to the shore in St Ives and is thought to be in the area because it was injured, or lost its bearings chasing prey.

Experts believe from footage submitted to them it is a blue shark and have warned the public to keep its distance while it remains in the area.

John Richardson of the Shark Trust said: ‘They are predominantly an oceanic, open water species, and not commonly found close to shore. 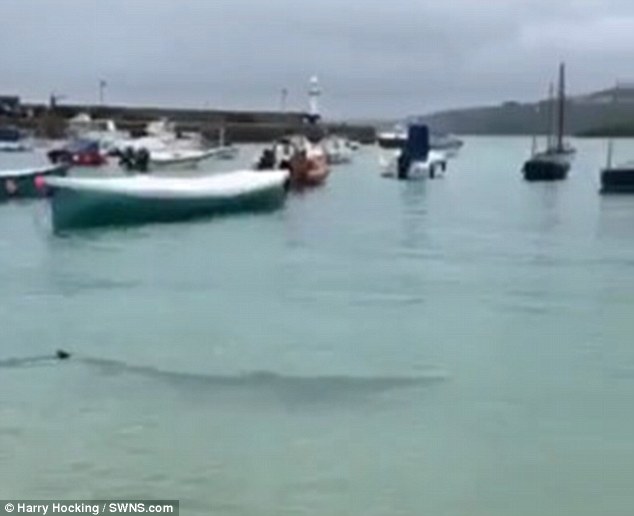 Swimmers have been warned to stay out of the water after this 9ft-long shark was spotted in a harbour in St Ives, Cornwall Experts from the Shark Trust believe it is a blue shark and that it may have lost its bearings while chasing prey, or that it is injured

‘But it is certainly not unprecedented to see one in such shallow waters. To see a free-swimming blue shark close to shore like this is a real privilege.

‘If this shark remains in St Ives harbour, the Shark Trust advises people to give it plenty of space until it moves back offshore to its usual habitat.

‘Due to the confined nature of the harbour, which could hinder the shark’s ability to naturally move away from disturbance, the trust strongly advises people not to get into the water with the shark.

‘We can only speculate on why this shark has come so close to shore. Possible explanations include injury or illness, or perhaps disorientation after following prey inshore. But this is speculation only.’

Footage of the predator was captured by workmates Archie Pickin and Harry Hocking, both 16, who were standing on the harbour slipway. They said it was eight or nine feet long. 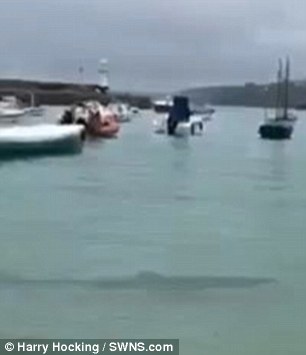 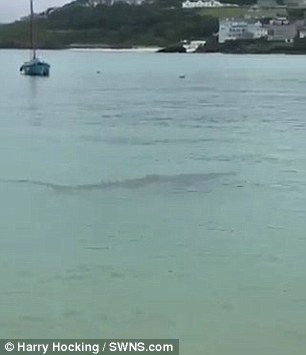 The shark was spotted at around 9.30am this morning by hire boat workers Archie Pickin and Harry Hocking at around 9.30am. Mr Hocking said: ‘People have already been saying they won’t be swimming now’

The pair were about to start work on the hire boats this morning at about 9.30am when they first noticed it.

Mr Pickin said: ‘We heard someone say about a shark and we didn’t believe it at first. It doesn’t exactly happen every day.

‘It was really big.’

Mr Hocking added: ‘It was swimming along for a good two to three minutes and went towards west pier before leaving the harbour.

‘A lot of people noticed and by the time it left there were dozens of people watching from the harbour wall.

‘People have already been saying they won’t be swimming now.’

Blue sharks are the most heavily fished shark in the world. In European waters the species is listed as Near Threatened on the IUCN Red List of Threatened Species.