Coronavirus patients who recover can be left with damaged lungs and may struggle to breathe when they walk, researchers claim

Recovered coronavirus patients can be left with damaged lungs, researchers in Hong Kong have claimed.

A small study of 12 patients who were discharged from hospital showed that two or three had reduced lung function. They got out of breath easier when they took a brisk walk, the scientists said.

Scans of nine patients suggested sustained damage to their organs, however it is too early to say if this will last long term.

Current patients with COVID-19 have shown fluid or debris filled sacs in the lungs, which may get progressively worse as the illness develops. 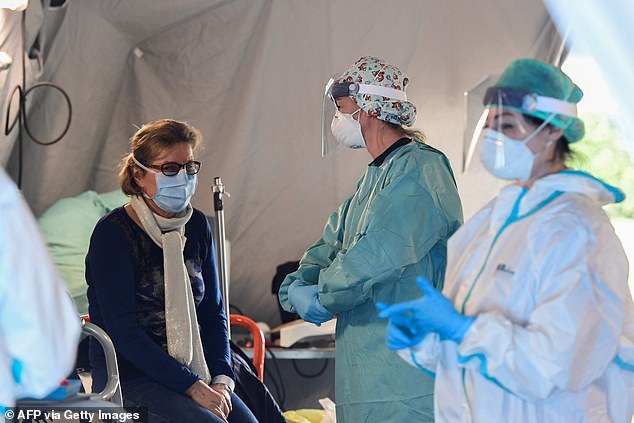 Recovered coronavirus patients can be left with damaged lungs, researchers in Hong Kong have claimed. Pictured, a patient waiting to be tested in Brescia hospital, Lombardy, Italy 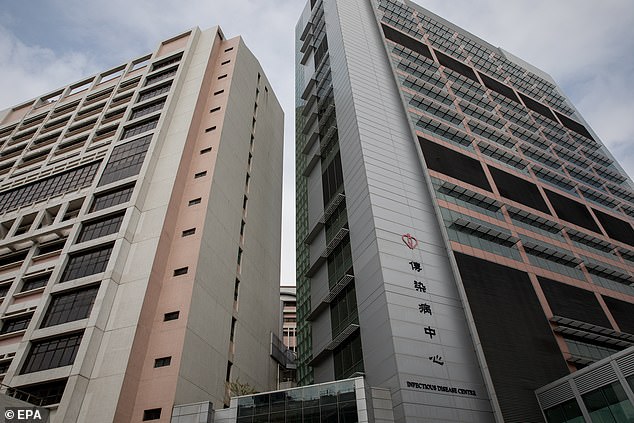 Dr Owen Tsang Tak-yin studied patients in Hong Kong, where 77 of the 134 patients diagnosed have recovered.

Globally more than 5,340 of the 140,910 infected have died, meaning the rest have either recovered, had mild symptoms or are still in hospital.

Hong Kong’s Hospital Authority released the findings of the 12 patients on Thursday, according to the South China Morning Post.

WHY ARE THOSE WITH HEALTH CONDITIONS MORE LIKELY TO GET ILL WITH COVID-19?

Data shows patients with pre-existing conditions are more likely to suffer severe illness and die because their immune systems are weaker.

Those who have underlying conditions ‘have less of a “safety net” to cope with the demands’, Professor Naveed Sattar, an honorary consultant in cardiovascular and medical sciences, explained.

He told MailOnline: ‘If you are healthy, your buffer capacity is good. The rest of your body can cope with the stress.

‘But if you have impairments to begin with, your systems break down.’

In many patients with COVID-19, the lungs are unable to receive enough oxygen. This has a knock-on effect on other organs.

Professor Sattar, at the University of Glasgow, explained the heart comes under a lot of strain trying to pump oxygenated blood around the body, including to the brain.

Dr Hajira Dambha-Miller, a GP and clinical lecturer, said the blood is less able to circulate in people who have high blood pressure because their vessels are narrower.

Not only does this slow the route of oxygen to organs, but it also means immune cells in the blood are not able to reach the virus as quickly as needed.

‘If you’ve got diabetes’, she said, ‘you have high sugar levels and your blood becomes like treacle.

‘When the body does kick in, it won’t work as it should do. The immune cells are damaged because they’ve been saturated in sugar for years and don’t work the way they should.’

Dr Damnha-Miller said similar processes are impaired in the elderly.

The medical director of the authority’s Infectious Disease Centre at Princess Margaret Hospital in Kwai Chung said two to three of 12 patients were unable to do things as they had in the past.

He said: ‘They gasp if they walk a bit more quickly.’

Dr Tsang and colleagues found a drop of 20 to 30 per cent in lung capacity was leaving the patients slightly breathless.

COVID-19 is a respiratory illness with symptoms of a persistent cough, which leads to a shortness of breath, and a fever.

In severe cases, it can cause pneumonia. The elderly and those with underlying health conditions are most at risk of serious illness.

While unwell, patients’ CT scans show air spaces in their lungs filled with a substance, usually pus, blood, or water, known as ground glass opacity, doctors at The First Hospital of Lanzhou University in China have shown.

Ground-glass opacity is frequently associated with consolidation, which is thickening or swelling of soft tissue.

Such abnormalities are similar to those found in patients suffering from SARS and MERS.

The Radiological Society of North America have previously released scans of patients who died from COVID-19.

X-ray images and CT scans showed how the disease ravages its victims’ lungs.

The scans showed white patches in the lower corners of the lungs which indicated ground glass opacity, which was particularly obvious in the scans of a 44-year-old man who worked at the Wuhan seafood market – thought to be the origin of the outbreak.

The man was admitted to hospital on December 25, 2019 after suffering from a fever and cough for almost two weeks. Doctors diagnosed the man with pneumonia and acute respiratory distress syndrome.

Despite being treated by doctors, he died a week later.

The CT scans of a 54-year-old woman who caught the coronavirus after travelling to Wuhan, China, show the same partial filling of air spaces.

The woman was diagnosed with severe pneumonia caused by the virus after suffering from a fever, cough, fatigue and chest congestion for a week.

The scan of a 45-year-old woman from Sichuan Province in China who tested positive for COVID-19 after returning from Japan shows white patches and a ‘reversed halo sign’ in the left upper lobe of her lung.

This is when fluid-filled sacs are surrounded by a complete ring of inflamed tissue, about two millimetres thick. 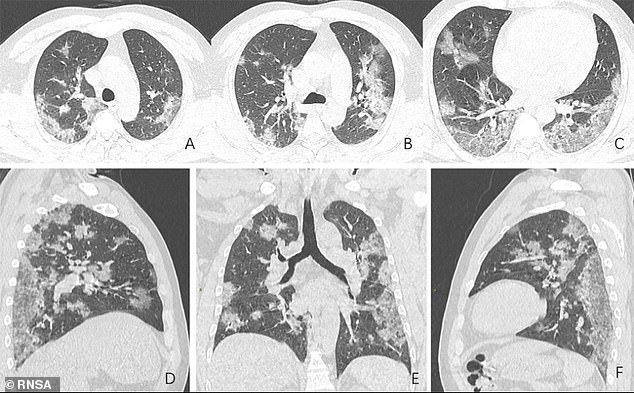 The shocking chest X-rays (pictured) of one coronavirus victim, a 44-year-old man who worked at the Wuhan seafood market thought to be the origin of the outbreak, clearly show ground-glass opacity – air spaces in their lungs filled with a substance, usually pus 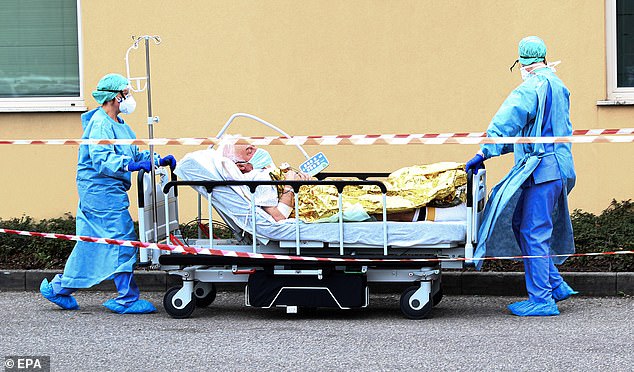 In severe cases, COVID-19 can cause pneumonia. The elderly and those with underlying health conditions are most at risk of serious illness. Pictured, health workers wearing protective suits and a face masks in Brescia, Italy, while caring for an older patient 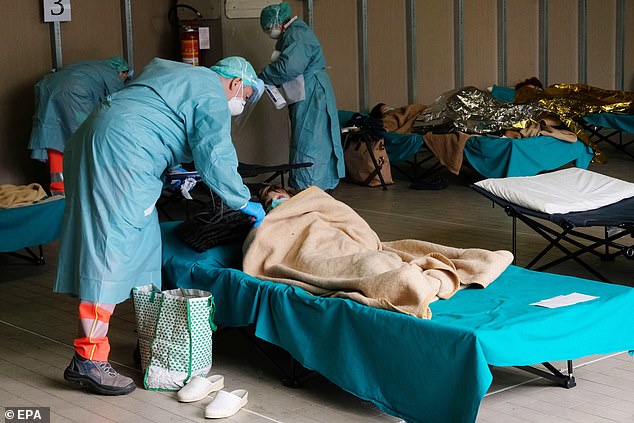 It is too early to say what the long-term damage of the coronavirus may be. Pictured, a child being cared for in Brescia Hospital, Italy