The 1,800 square metre rink, part of a leisure complex which also features a cinema and ten-pin bowling lanes called the Ice Palace, is to be used to house the dead before their bodies are buried or incinerated. The decision was reached following talks between Madrid’s regional government, Spanish army chiefs and city hall officials to take advantage of the ice rink’s freezing temperatures because of the saturation facing the city’s funeral parlours.

News of the shock move came as Spain began its second week of a government-imposed lockdown with its worst coronavirus death toll in 24 hours – 462 people.

Health chiefs confirmed 2,182 people with the virus have now died in Spain and the number of coronavirus sufferers in intensive care stands at 2,355 – 570 more than yesterday/on Sunday.

The number of confirmed cases nationwide was 33,089 at lunchtime on Monday. 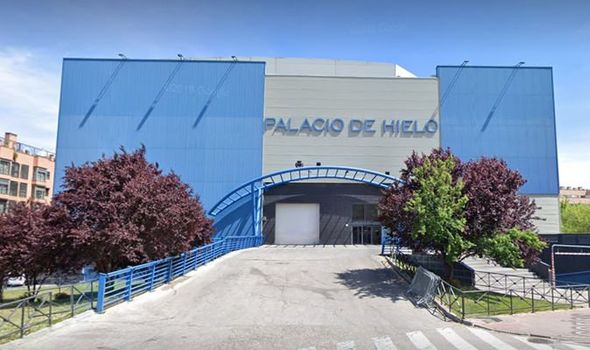 It was closed as part of a government-ordered lockdown last week imposing restrictions on peoples’ movement and shutting restaurants, bars, theatres, cinema and other leisure complexes.

Before the coronavirus crisis, it was a popular attraction for Erasmus students and families with children who paid around £6 to enjoy the ice rink when it wasn’t being used for competitions.

The complex, normally open to the public from mid-September to the end of May, also has a 15-screen cinema, 24 bowling lanes and a shopping centre with restaurants.

It was not immediately clear this afternoon how many of Madrid’s coronavirus dead could be taken there ahead of burial or cremation.

City council sources quoted by Spanish media said the temperature of the ice made it the ideal place to avoid victims’ bodies from decomposing amid the growing difficulties of the Spanish capital’s funeral parlours to deal with the increasing number of dead.

One told news website El Espanol: “We know this is a very delicate situation but there was no other option. It’s a necessary reaction.

“Hospitals and crematoriums are doing as much as they can.”

Madrid’s IFEMA exhibition centre has already started functioning as a field hospital and is set to be treating 400 patients by the end of today.