It has been one of history's great scientific achievements. It took just 333 days from the moment Chinese officials released the genetic map, or genome, of COVID-19 in January to the first person being injected with an approved vaccine. The first recipient, 90-year-old grandmother Margaret Keenan from central Britain, said she felt "so privileged".

With most vaccines taking 10-15 years to create, the less than one-year time frame for a COVID-19 vaccine has smashed all records. At a time when the virus is still ravaging many parts of the world, particularly in the northern hemisphere, the lightning speed progress of a vaccine is a blessing. If only that was the most challenging aspect. 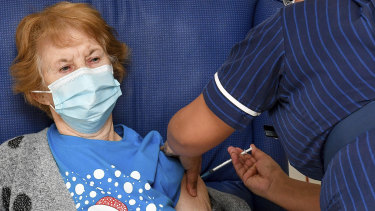 Margaret Keenan, the first patient in the world to receive the British approved Pfizer-BioNTech COVID-19 vaccine.Credit:AP

The daunting task of manufacturing, distributing and administering enough doses of approved vaccines is now becoming a reality. Of most concern has been the battles being waged by particularly wealthy nations to purchase many millions of doses even before the vaccines have been given the green light.

With those with the greatest buying power pre-purchasing vast amounts of potential vaccines – more than 3.8 billion doses have already been bought by high-income countries, which is more than all other nations combined – there is growing concern about how long some nations will have to wait in line.

Australia has joined the race by, like many wealthy nations, placing bets on several different vaccines. That proved wise when on Friday the University of Queensland's vaccine was cancelled after several trial participants returned false positive HIV test results. The federal government was hoping to purchase 51 million doses of the vaccine.

Instead Australia will now rely on deals it has done with other manufacturers, including 10 million doses of the Pfizer vaccine. It has also agreed to contribute to COVAX, a global collaboration of more than 180 countries established to try to ensure all countries have equal access to a vaccine. The Coalition has committed more than $120 million with COVAX to purchase enough doses to vaccinate half of Australia's population, while another $80 million was committed to assisting less wealthy nations get enough supply.

But the desperate struggle by many countries to procure enough doses has not escaped broader geopolitical battles. US President Donald Trump, sticking to his America first mantra, has refused to join in the global COVAX effort because of its links to the World Health Organisation, which he believes is too influenced by China. Although largely symbolic, Mr Trump has also signed an executive order to ensure that all US-purchased vaccine goes to Americans first.

This leadership vacuum has left the door open for Russia and China, which are using America's lack of interest in joining a global effort as an opportunity to expand their influence by offering less-wealthy nations doses of their own state-backed vaccines.

While it's unclear whether US President-elect Joe Biden will join the COVAX program, even without US support it has been successful in reserving enough manufacturing capacity to produce more than 1 billion doses. It hopes to double that number by the end of next year.

But it will take time, with some estimates suggesting several years will be needed to produce enough doses to offer most people a chance to be vaccinated.

Australia, which is virtually free of COVID-19 community transmission, needs to think hard about how many doses of vaccine it uses while Indonesia, one of its closest neighbours and allies, is losing the battle to contain the virus.

While there is certainly a case in Australia for vaccinating those most vulnerable, particularly healthcare workers, the elderly and those with underlying conditions, responsible nations must balance our needs with the global fight against the pandemic too.