Somali refugee, 12, who couldn’t swim drowned in river as her friend who was trying to teach her panicked and pushed her away, inquest hears

The drowning of a 12-year-old Somali girl in a river was an accidental death, a coroner has concluded today.

Shukri Yahye-Abdi drowned after getting into difficulties in the River Irwell in Bury, Greater Manchester, during a heatwave on June 27 last year.

The 12-year-old entered the water after being encouraged by another child who knew Shukri could not swim but had told her, ‘You’d better get in the water or I am going to kill you.’

Shukri’s family had asked the coroner to consider a verdict of unlawful killing, arguing she was ‘coerced’ into the river, and more should have been done to protect their daughter from bullying.

But a coroner today said that although the other child had ‘breached her duty of care’, there was, ‘absolutely no evidence that the child had any intention to kill Shukri.’ 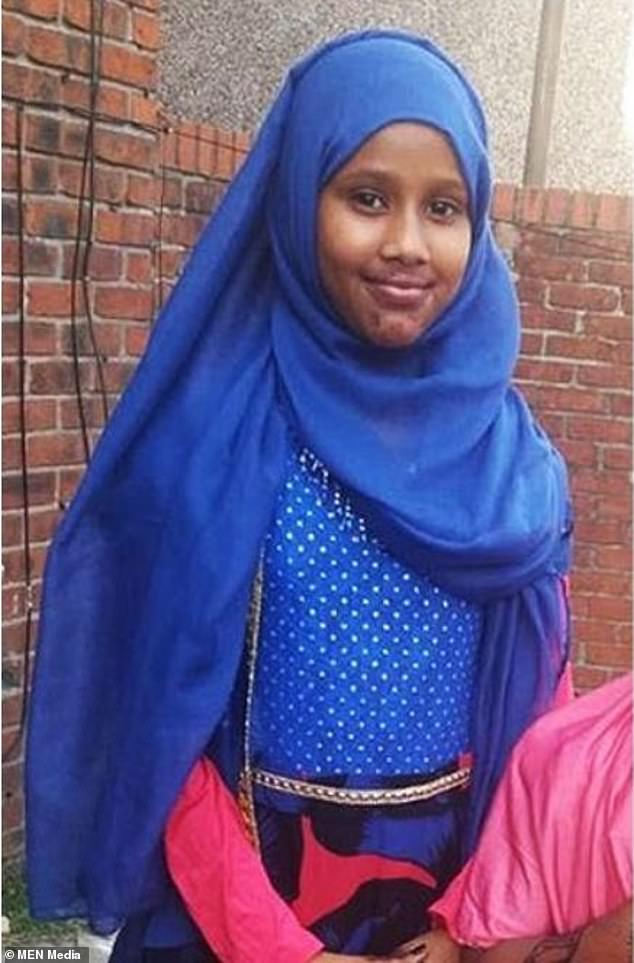 Shukri Yahye-Abdi drowned after getting into difficulties in the River Irwell in Bury, Greater Manchester

Both Shukri and the other child, referred to as Child 1, had joined other youngsters in visiting the river on the warm, sunny evening.

Lawyers for Shukri’s family submitted the coroner should consider a verdict of unlawful killing from either an act of murder or gross negligence manslaughter.

The inquest heard evidence that while walking to the river, Child 1 had said to Shukri: ‘You’d better get in the water or I am going to kill you,’ but it was said in a laughing and joking manner.

The coroner found the remark was not made with any malice or intent, but ‘very much in the context of a child who was keen to go swimming in the water and did not want to be the only one in the water’.

Shukri’s mother Zak Zam Ture said her daughter had never been swimming or been near a river in her life. She had told the court she had been expected home at 3.15pm that day – in time for mosque at 5pm. 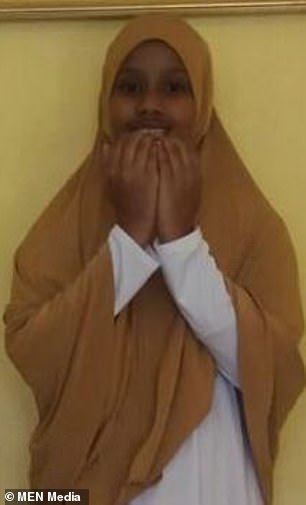 Shukri was ‘pushed’ in the water, the inquest heard

Joanne Kearsley, senior coroner for Manchester North, said Shukri entered the water with a child and did so ‘following some encouragement’.

The other child was aware Shukri could not swim and was reliant on her to stay afloat, she said.

Both went to an area of the water which was deeper and at some point the other child tried to swim underwater, the coroner continued.

Ms Kearsley said: ‘A combination of deep water, together with Shukri panicking and the other child struggling to swim, meant that she probably pushed Shukri off.

‘Shukri went under the water and drowned.’

Ms Kearsley went on: ‘The fact is, there is absolutely no evidence before the court that Child 1 had any intention to kill Shukri.

‘At its very highest, the comment made by Child 1 which has been described as a ‘threat to kill’ is in my judgment, in the context spoken, a phrase used by an exuberant child in the company of her peers.

‘To even suggest this case reaches anywhere near the standard required for a court to consider the most serious of offences was misplaced and most unhelpful.’

The coroner did find that Child 1 had breached her duty of care to Shukri, in that a child of similar age and background should have recognised the risk of death to someone who needed her to stay afloat.

However her actions fell far short of a flagrant breach in which her actions could amount to gross negligence manslaughter, she added. 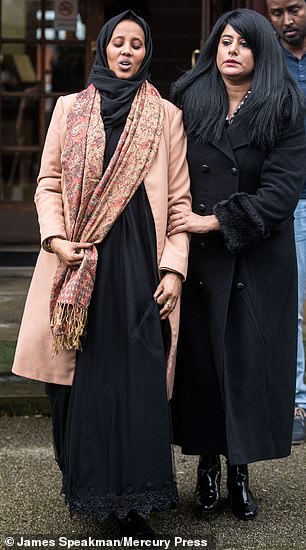 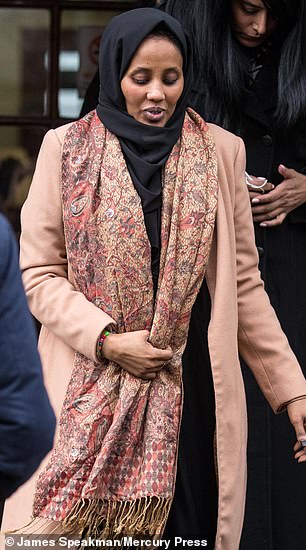 Giving evidence, her mother Zak Zam Ture (seen outside Rochdale Coroner’s Court in February) said Shukri had never been swimming or been near a river in her life. 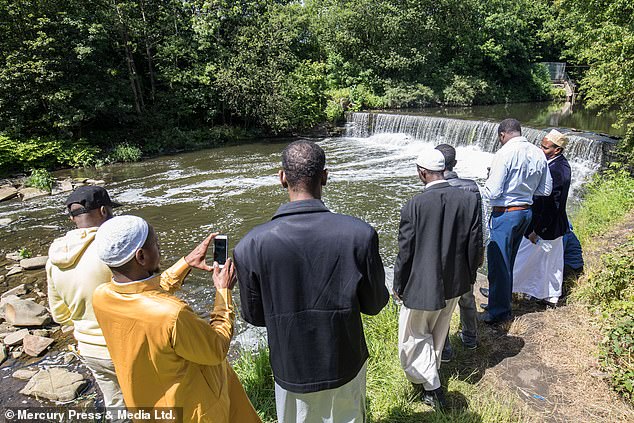 Ms Kearsley said: ‘Child 1 was naive, she was foolish, she thought she could teach Shukri to swim, and this ill-considered act went badly wrong.

‘She did not force Shukri into the water, she did not undertake any actions with the explicit intention of causing her harm.

‘She was in unfamiliar water, the dangers of which I am satisfied were not fully appreciated.

‘At its highest this was a serious error of judgment. I am sure the ramification of June 27, 2019 will be felt by many for a long time.’

Following her conclusion, Ms Kearsley said she sincerely hoped that instead of focusing all their thoughts on how Shukri died, that her parents could now focus on the ‘happy memories of Shukri who was a beautiful young girl’.

Shukri, the daughter of mother ZamZam Ture and father Yahye Abdi, was born in a refugee camp in Kenya and came to live in Bury aged 10 with her mother and siblings.

She was described as a ‘happy, lively, chatty girl’ in school, with teachers describing her as a ‘joy to have in class’ and as always smiling. 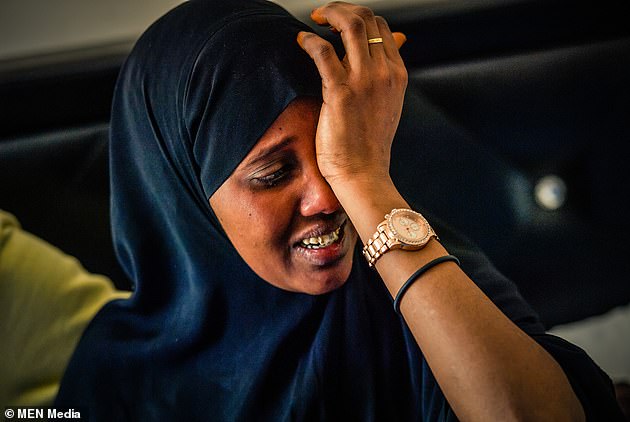 The river was 30 metres wide with large rocks that stretched across a shallow part of the water, the inquest heard.

Within a couple of metres of the rocks, the water went from being knee deep to being 15ft deep – which is where both youngsters got into trouble.

After the hearing, Maz Saleem, spokeswoman for the Justice4Shukri campaign, said the inquest ‘brings to a close a painful chapter for the family, one which has been made even more painful due to the failure of all the institutions that were meant to protect Shukri’.

She said: ‘The investigation of Shukri Abdi’s death and subsequent investigations by the school, police and other local authorities have come to represent yet another example of the institutional racism riddled throughout this country.’

Ms Saleem accused Shukri’s secondary school of failing to protect her from ‘bullying’ and claimed police did not investigate the death comprehensively.

Her school, Broad Oak Sports College, said they were not aware of any bullying. The school later said it would review its anti-bullying policy.

Ms Saleem added the campaign will go on and the family’s lawyers said they may seek a judicial review of the inquest conclusions.

The findings of a probe from the Independent Office for Police Conduct following a complaint from Mrs Ture that Greater Manchester Police (GMP) prematurely concluded her daughter’s death was not suspicious were also released on Friday.

IOPC regional director Amanda Rowe said: ‘We found insufficient evidence to suggest that GMP did not conduct a thorough investigation and I am satisfied that it was carried out in line with national and local policies and guidelines.’

She added there was no evidence to indicate Shukri’s family were treated less favourably because of their ethnic background.