The rising cost of stamps has been fuelling an illegal black market where shoppers can buy them on eBay for a quarter of the price.

First class stamps have risen from 60p to 67p in the past five years, forcing sellers to list cheaper used ones online.

An uncancelled stamp, which is one that has been through the postage system but hasn’t been marked as used, are being listed on eBay for as little as 16p.

And there are now more than 2,100 listings of fraudulent stamps on the online marketplace, according to an investigation by The Daily Telegraph. 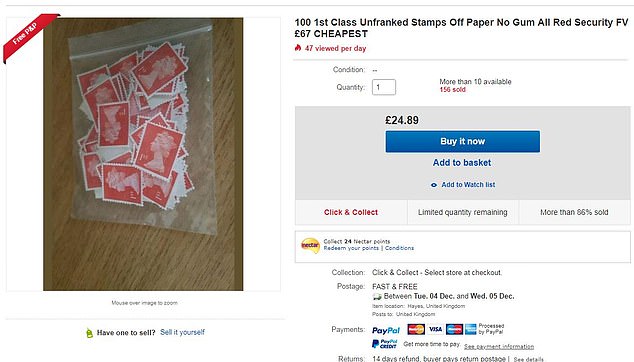 One seller told The Daily Telegraph that they sold 20,000 re-used stamps a month and had encountered ‘no issues’ with selling them.

Another seller said they acquired their uncancelled stamps by taking advantage of  charities that sell on their received envelopes to stamps collectors.

A worker at The Royal Mail said she sees 100 re-used stamps a day as management have told staff to now turn a blind eye to lower their costs. They no longer issue penalty warnings or strike out stamps by hand.

The Charity Commission issued a warning yesterday that charities that collect used stamps as a way of fundraising could be inadvertently ‘enabling fraud’. 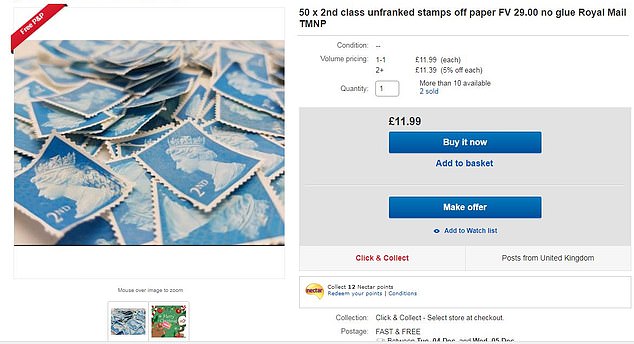 One seller told The Daily Telegraph that they sold 20,000 re-used stamps a month and had encountered ‘no issues’ with selling them

It said: ‘Although we do not believe that charities are knowingly profiting from the collection and sale of used stamps, some are inadvertently enabling this form of fraud by selling packages of used stamps, commonly referred to as “kiloware”.

‘The majority of these stamps are then prepared and fraudulently re-sold as if they were valid postage. The money being made by criminal gangs from this type of fraud is significant, and can be used to fund further and wider scale criminal activity.’

Many of those buying the illegal stamps, also known as ‘unfranked’, are believed to be sold to people running mail order businesses which comes as a blow to the Royal Mail and could cost it up to £10million a year. 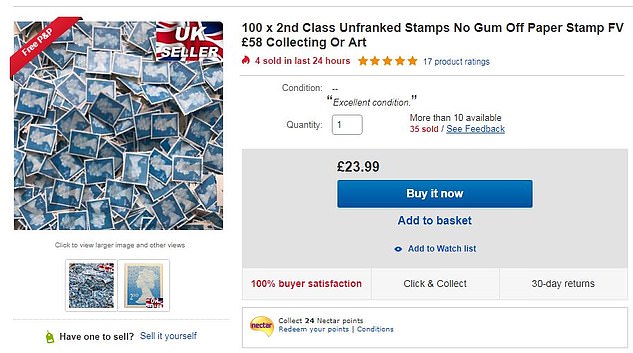 There are now more than 2,100 listings of fraudulent stamps being sold to shoppers on eBay

Silvia Rook, lead officer for Chartered Trading Standards Institute, told the Daily Telegraph that she believed the fraudulent stamps could be because of their price increase in recent years.

She said: ‘In the past when stamps were just pence, this was not such a big deal. Now stamps are an expensive commodity and if you can pick them up cheaply it does make a difference.’

And the Royal Mail, which has seen a 32 per cent drop in share price since it issued a profit warning in October, confirmed that they were considering raising the cost of postage stamps to tackle losses.

Selling and using uncancelled stamps are illegal under the Fraud Act 2006 but sellers on eBay have found a legal loophole by adding a disclaimer to their listings that state the stamps are for collectors.

A spokesman for Royal Mail told The Daily Telegraph: ‘Royal Mail’s priority is to cancel all stamps when a mail item enters the network to reduce the risk of fraud. We also have a range of revenue protection processes in place to identify and stop uncancelled stamps that have been re-used.’