‘Your house is a safe haven…but we haven’t got that’: Couple tell of ‘living in fear’ of nightmare neighbour who subjected them to two-year abuse campaign leading to 70 calls to police

A couple with a nightmare neighbour who ‘subjected them to two years of abuse’ say they are still ‘living in fear’ of what she might do next.

Sarah and Mark Duckworth, 39 and 42, claim Loretta Diplacido, 54, turned on them two years ago after the couple ‘politely refused’ to let her grandson use their trampoline.

They say she has since filmed their children over the garden fence of their home in Leeds and threatened to call social services.

But despite her receiving a 12-month community order for assault last month, Mrs Duckworth told This Morning the family is still being harassed by her.

But Ms Diplacido told MailOnline she ‘wants nothing more than quiet enjoyment of my home’ and would like to ‘live in peace with my neighbours’.

She told the programme today: ‘She is still living next door. We still have that constant fear that she might do something else, verbally or physically assault us.

‘Your house is your safe haven and we haven’t got that at the moment.’ 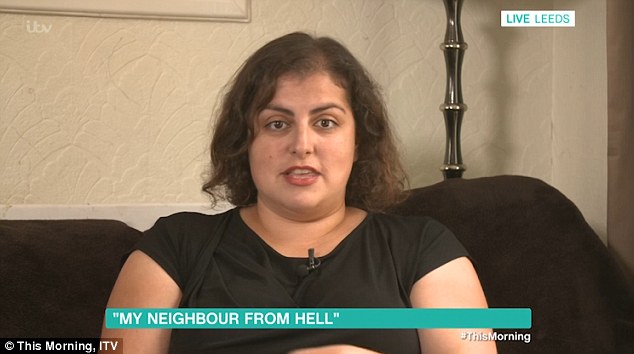 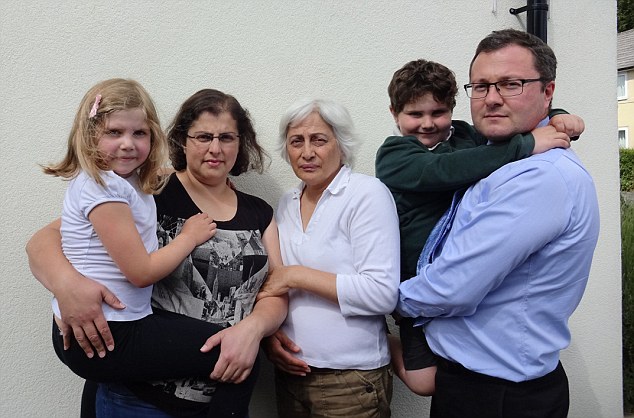 The family want her evicted from her council-owned property after a string of more than 70 anti-social incidents.

Asked what life is like on a day-to-day basis, she replied: ‘Its very tense. We check CCTV before we leave our property.

‘When I’m returning home, if I know my husband is in, I’ll phone or text him and ask him to leave the door open and listen out for me.

‘We usher the children in and out of the car very quickly. Its very draining mentally.’

In a statement, Ms Diplacido told MailOnline: ‘I am a 54 year old grandmother, who, despite the picture you try to paint of me, had no involvement with the courts until a year ago, and wanted nothing more than quiet enjoyment of my home, where I live alone.

‘There is nothing I would like more than to live in peace with my neighbours, Mrs Azadeh Kent and her daughter Sarah, and son-in-law Mark Duckworth.

‘Yes, it’s right that I pleaded guilty at Leeds Magistrates Court – twice in fact – to assaulting Mrs Kent, and I regret that I had to do so; but both of these minor assaults were committed under the most intense provocation. 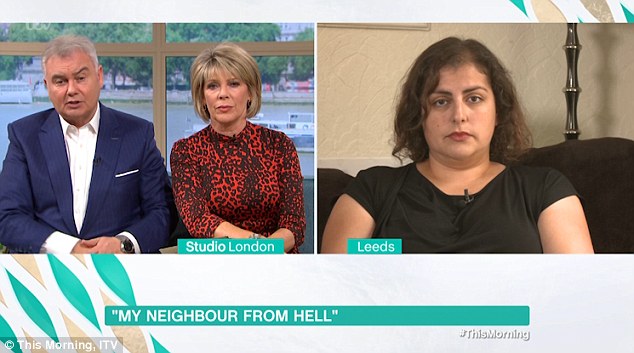 ‘None of us, in a free society, like to think that our every move is being watched, monitored and recorded; but this is just what I have been forced to put up with; – in some kind of ‘Big Brother’ society operated by my next door neighbours.

‘They have CCTV trained on my property, and constantly point their mobile phones at me, filming me, when I go about my business.’

But Mrs Duckworth continued by slamming the local authorities, both Leeds City Council and West Yorkshire Police, for their response to Diplcacido’s anti-social behaviour.

She explained her neighbour was given a 12-month community order and 20 days community service.

But she said: ‘That’s all that’s happened to her. She’s still living next door.’

She told hosts Ruth and Eamonn: ‘Leeds City Council haven’t been helpful at all.

‘In the first 12 months since the first incident we had sent the council literally everything she had.

‘From blocking cars in, to filming us to standing at the top of the gate, trying to intimidate us, swearing at us. 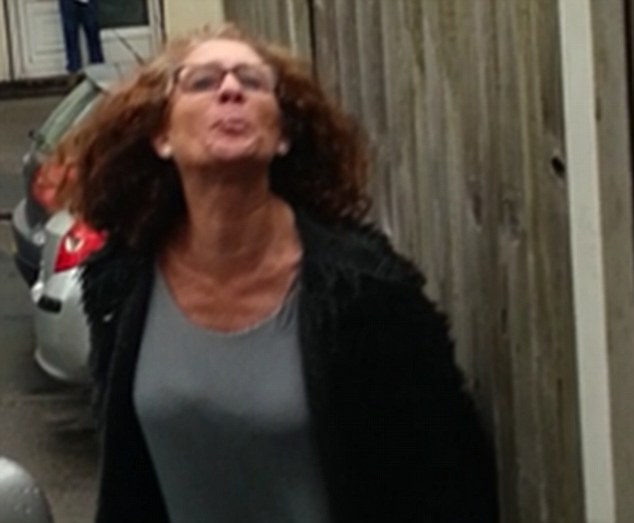 The family have filmed abuse directed at them by Diplacido, including her spitting at them, pictured

‘And my response was correct the wrong – I haven’t done anything wrong , it’s a public highway – deal with the person who’s abusing me.’

Speaking previously Mrs Duckworth’s husband Mark said  ‘She made our life hell. We dreaded walking out of the front door.

‘She even drove my wife to the point that she wanted to move.

‘Every time we went out the house or were returning – every single time – we felt anxiety. It really played on our mind all the time.’

Mr Duckworth and his wife, a children’s entertainer, moved into a their two-bed house 13 years ago, around the same time Diplacido moved into the home next door.

He said that his family steered clear of Diplacido but an altercation over a trampoline in June 2016 triggered two years of abuse.

He said: ‘We said no because we knew the family had no boundaries. We politely declined. 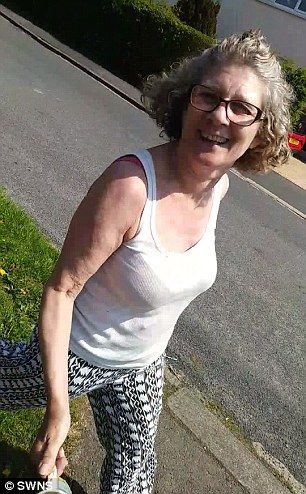 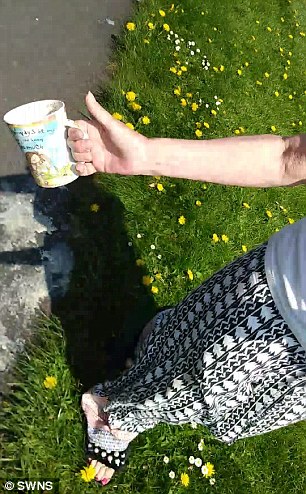 She was also caught on camera following Mrs Kent, left, and pouring hot tea over her, right, before chasing her towards her house 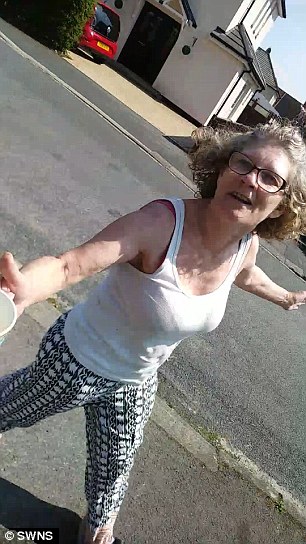 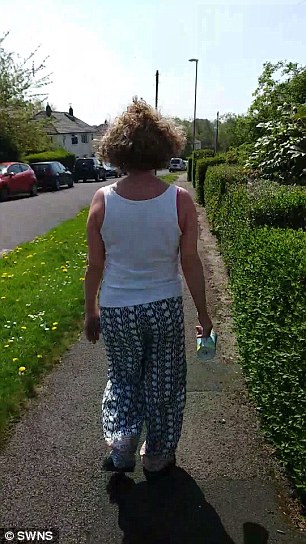 The family say they have reported Diplacido, left and right, to police 70 times and she was handed a community order for assault last month

‘Two weeks later, someone from the council came around telling us there had been a complaint about us parking on the grassy verge on the street, and it went from there.’

In one disturbing incident, they claim Diplacido filmed their son Rupert bouncing naked on the trampoline in the garden.

They claim she threatened to report Mr and Mrs Duckworth to social services for allowing their child to be naked in their garden.

The couple said they had to call the police to get Diplacido to delete the video from her phone and they went on to report over 70 incidents to the police in two years.

Mr Duckworth said: ‘Of course it’s not a crime to allow a child to be naked in your own garden, but I even called social services to make sure of it.

‘The incident was deeply distressing to me and my wife.’

The abuse continued with parking being a bone of contention, they claim.

Mr Duckworth said: ‘We live on a very tightly packed road and sometimes we have to park in front of her house. That seemed to really annoy her.

‘She blocked our driveway with her car and shouted at us when we entered the house, she even shouted at our kids.

‘We found a nappy in our recycling bin and we knew that it was her. She would stand at the top of our drive with her arms crossed, looking menacing.

The couple again contacted the police and were told to purchase cameras, so they spent £260 on CCTV. 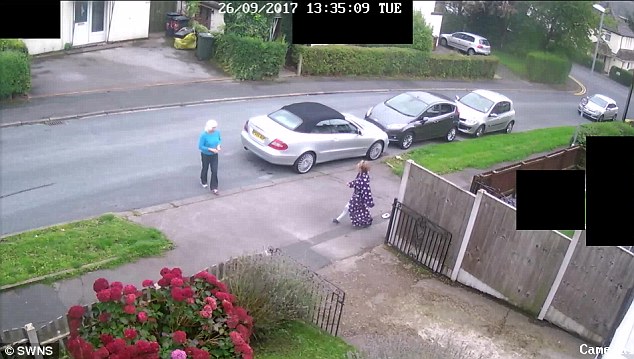 Mr Duckworth set up CCTV at the home, which captured an argument over parking outside their homes

But they claim she then turned her focus to Mrs Kent, 63, who recently moved in with her daughter and son-in-law and looks after her grandchildren.

Describing an incident they caught on CCTV, Mr Duckworth said: ‘Loretta boxed my mother-in-law in with two cars in September 2017.

‘As Azadeh was taking a picture, Loretta rushed out in her dressing gown and confronted her.

‘She was aggressive and standing far too close to Azadeh. She grabbed her finger and twisted it and caused permanent tissue damage to her finger.’

The incident was caught on the Duckworths’ CCTV cameras and it was handed to the police.

But in May 2018, Diplacido struck again and was caught pouring a hot mug of tea over Mrs Kent before mocking her and chasing her into her home.

In the disturbing footage she got on her phone, Diplacido can be heard mocking Mrs Kent as she tries to hurry away.

She said: ‘Oh dear I’m very sorry, I’ve spilled my drink, so sorry love,’ as Mrs Kent can be heard to breathing heavily and running into her home.

The police were called and Diplacido spent 24 hours in a cell and was banned from her property for six weeks ahead of the court case, they claim.

In August, she was handed a 12-month Community Order for common assault against Mrs Kent, on May 8.

Leeds County Council could not comment on one of their ongoing investigations.