Meet the ‘conceptual septuplets’: Family go from zero to SEVEN children in nine years from single round of IVF after parents win treatment in a raffle

One lucky family were blessed with two sets of twins, one set of identical twins and a daughter nine years apart from a single round of IVF after winning the treatment in a raffle.

The extraordinary children have been dubbed ‘conceptual septuplets’ by a fertility doctor who believes seven babies from one IVF cycle is a unique event.

Julie and Lance Erickson, from Minnesota, were heartbroken after three rounds of IVF over five years failed.

Then the couple won a round of free IVF treatment after entering a raffle organised by Resolve, the National Infertility Association, and their fortunes changed dramatically.

The treatment prize produced ten embryos – all conceived at the same time in 2007 -and the first to be born was Kaitlyn, now nine, in July 2008. 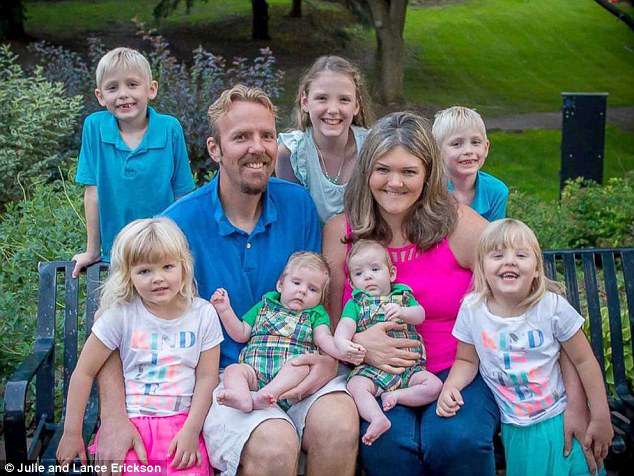 Julie and Lance Erickson, from Minnesota, have seven children born up to nine years apart from a single IVF round that they won in a raffle (pictured together with daughter Kaitlyn, nine, identical twins Caleb and Cody, seven, twins Chelsea and Kelsey, four, and twins Caden and Colton, 11 months) 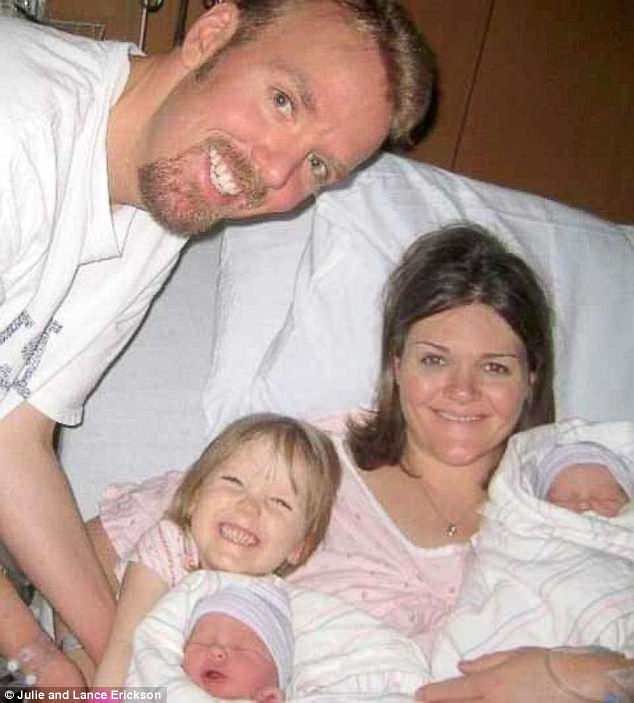 The rest of the embryos remained stored in the freezer and were taken out in twos as the couple underwent more fertility treatment over the years.

Mrs Erickson then gave birth to identical twins Caleb and Cody, now seven, Chelsea and Kelsey, four, and 11 months ago twins Caden and Colton arrived into the world.

The 40-year-old said:  ‘Every time I find out I’m having twins I’m happily excited about it. But its definitely challenging. I’m not going to lie – its hard work. But its worth it.

‘Every time we find out we are having more twins, its never a total shock, but its exciting every time and amazing.’

She added: ‘At the time of our treatment, someone made a joke about the old woman who lived in a shoe and had so many children she didn’t know what to do.

‘I thought it was funny at the time – but now that’s me! It’s amazing to go from zero to seven children in nine years.’ 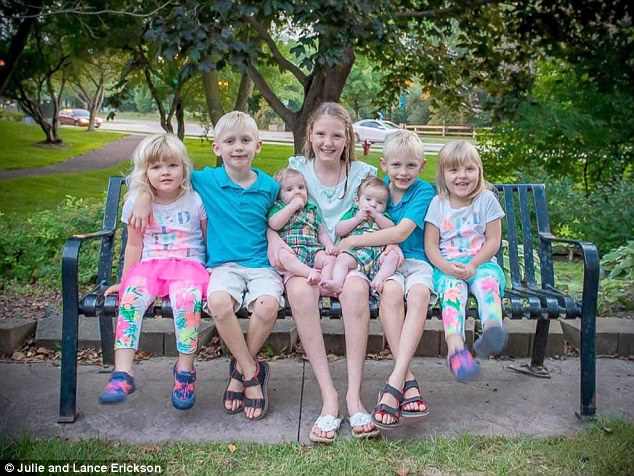 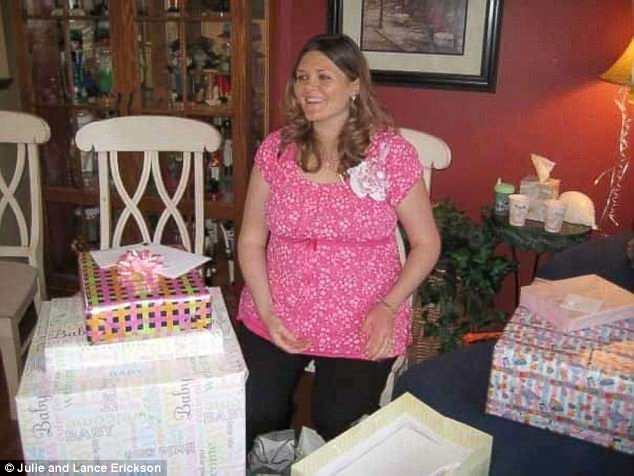 Mrs Erickson said that the years they spent trying for children were some of the most difficult times in their lives, and that finally having a child felt like a gift from God.

How does IVF work?

During in vitro fertilisation, or IVF, the woman is given fertility hormones to boost the number of eggs she produces. These eggs are then removed and fertilised by their partner’s, or donor’s, sperm.

After several days these eggs are then either placed inside the womb, or frozen for use later on.

She said: ‘It was one of the worst times of my life. Many people don’t understand how hard it is. Going to other people’s baby showers and even going to church on Mother’s Day was very difficult during those years.

‘When we won the raffle, I think I just went into shock. My husband Lance started sobbing. I was so happy. I felt that it was a gift from God.’

Although the pair have to work long hours to provide for their seven children, they wouldn’t have it any other way – and are now planning on using their final two embryos in September.

Mrs Erickson added: ‘It can be very lonely at times for people going through infertility like we did. I just want them to be encouraged by our family and to have hope. God has blessed us with seven miracles and we are so thankful for each and every one of them.’

Rob Smith, Clinical Director of Care London, said: ‘This is an amazing story. At CARE fertility we have had many babies born following one initial round of fertility treatment – each subsequent baby being born separately using a frozen embryo.

‘However, 7 babies, conceptually septuplets from a single IVF cycle is surely a unique event.’

Mr and Mrs Erickson can be contacted through their Facebook page Julie and Lance where they talk about their experiences of IVF. 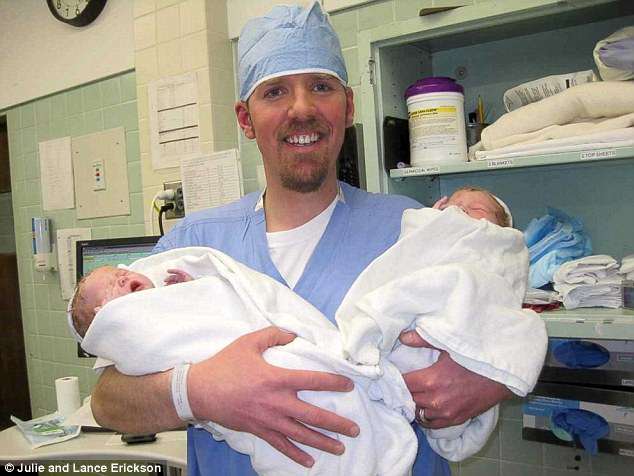 Although the pair have to work long hours to provide for their seven children, they wouldn’t have it any other way – and are now planning on using their final two embryos in September