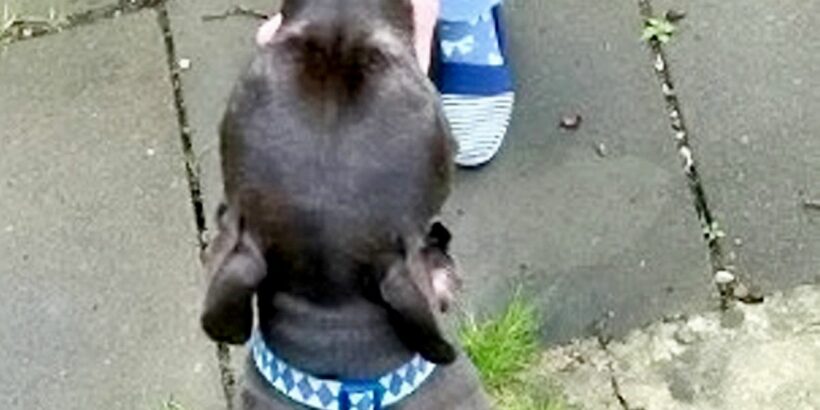 An elderly couple are furious with police after their pet dog was returned to them four months after being seized looking like "skin and bones".

Carole Roberts, 72, and 79-year-old husband John, are seeking compensation from the force.

West Mercia Police confiscated beloved pooch Dylan in December under the Dangerous Dogs Act, even though the couple claimed "he wouldn't hurt a fly".

The police said the animal was taken as part of a probe into an attack on a small terrier that left the animal so badly injured they had to be put down.

Carole maintained her mutt had been mistaken for another dog and this week the police and Crown Prosecution Service (CPS) revealed they were taking no further action.

But when Dylan was returned to the couple on Monday they said they broke down in tears upon seeing the state of their Staffordshire Bull Terrier.

The pair say he was a healthy weight when he was taken away but now his ribcage and spine are visible through his skin and fur.

His collar now hangs loose from his neck and Carole reckons he has lost more than half his body weight.

The pair have accused the force of animal neglect and are planning to lodge a formal complaint against West Mercia Police and seek compensation.

Carole, of Ronkswood, Worcester, said: "When we got him back I was crying. He was so skinny, I was frightened of hurting him.

"I said 'I know why you have brought him back – it's because you're afraid of him dying in kennels'."

John added: "Why keep him so long? He was innocent. Why should we pay the vet bills after what they have done to him?"

Carole said Dylan had never been on medication before and now he is on four different kinds, including anti-anxiety drugs and another for gastric problems, as well as an antibiotic.

A medical report given to the family refers to "chronic weight loss" and stress-related diarrhoea and intestinal disease.

Carole and John are now trying to feed skinny Dylan back to a proper weight and have taken him to the vets.

The police search warrant issued by Dudley Magistrates' Court under the Dangerous Dogs Act 1991 described a black dog with a large, muscular body.

But Carole says Dylan is small and brown with a patch of white on his coat and is always on the lead.

Carole, who has had Dylan since he was a puppy, says her dog has never bitten anything and even wagged his tail as the officers arrived to snatch him away.

A spokesman for West Mercia Police said: "As part of an investigation into the tragic death of a small terrier dog in August 2020, Dylan, a Staffordshire bull terrier, had to be seized by police and was homed in private kennels.

"We returned Dylan to his home on Friday 9 April after the decision was made by the CPS (to take no further action).

"During his stay in kennels, he had regular visits from a vet and was fed and cared for in accordance with his dog breed. During an assessment with the vet whilst in the kennels, they concluded that Dylan was overweight and adjusted his diet accordingly.

"We are aware that he was subscribed medication by the vet during his stay in kennels for a number of ailments and have therefore provided the owners with the details and the necessary follow-on medication."