A couple who spent 20 years lovingly restoring a Grade II-listed property to its former glory are locked in a bitter dispute over plans to build a quarry next to their dream home.

Barbara and Simon Campbell purchased the 16th century manor house, complete with 15 acres of land, at an auction for £270,000 in October 1999.

The pair then spent the next two decades painstakingly renovating the derelict property in Sudbrook, Grantham, Lincs., into the perfect family home

Barbara, 54 and Simon, 57, have since lived at the six bedroom house, which boasts two lakes and its own woodland, with daughters Megan and Rosie, both 23, and 21-year-old son Alasdair.

However, council bosses are now set to approve plans to open a quarry site, which will extract one million tonnes of sand, less than 100 metres away from their land. 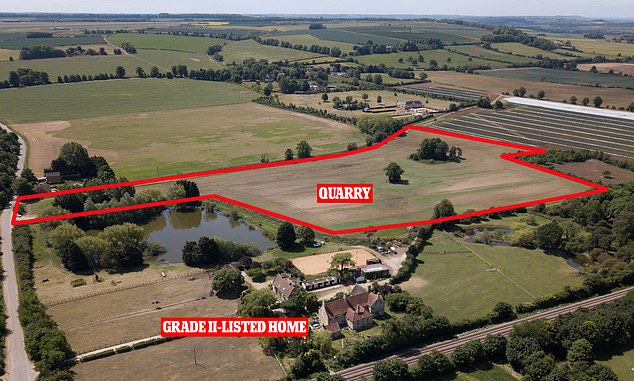 The marked red zone could soon be home to a sand quarry, less than 100metres away from the dream home of Barbara and Simon Campbell 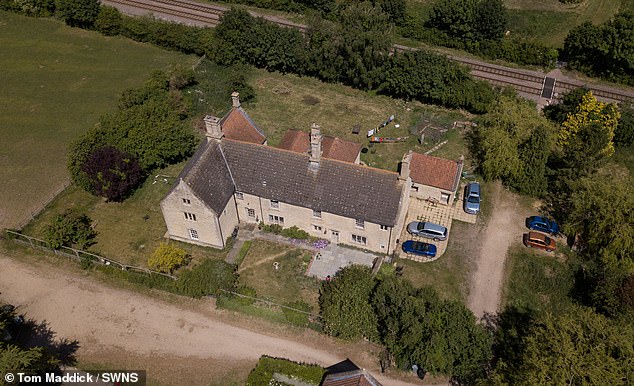 Barbara and Simon are in a race against time to try and stop the major development, which they fear could dramatically reduce the value of their luxury village home.

The couple, who own an engineering company, are also concerned of the health implications, such as cancer, caused by dust as well as damage to wildlife habitats.

But they say they could be left powerless to act due to a 60 year old planning loophole, which they were not made aware of when they bought the historic building.

Barbara said: ‘Everything has been hunky-dory for the last 15 years, this property was a labour of love and it’s basically become our family home.

‘We then discovered that field next to us has got dormant planning permission for a quarry, we couldn’t quite believe it.

‘The whole site has been covered by two original planning applications, one dating back to 1954 and the other from 1967, which we knew nothing about.

‘The fact that this was effectively an existing quarry should have been available to us at the time we bought the property. 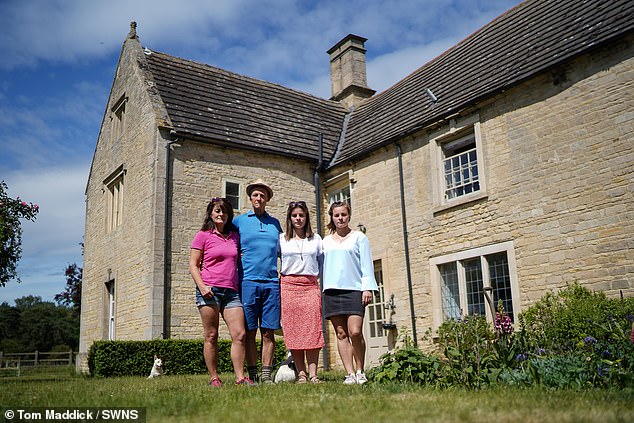 Barbara and Simon, pictured with daughters Meghan and Rosie, have been left furious after they were not made aware of dormant planning permission when buying the property 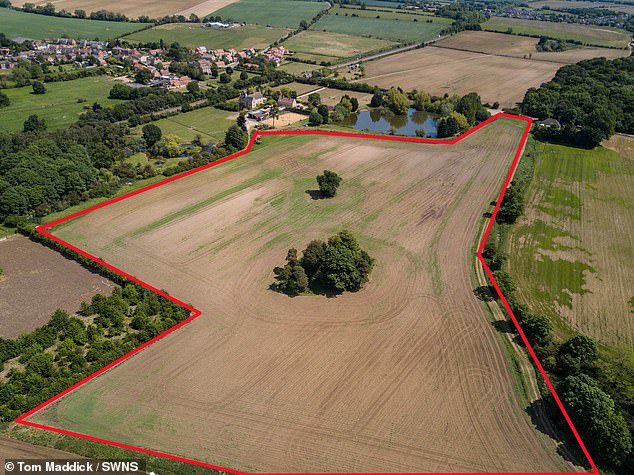 The whole site has been covered by two original planning applications, one dating back to 1954 and the other from 1967

‘We can’t go back and question what was agreed and legitimised at the time. It’s the unfairness of this and the lack of transparency that really galls us.

‘Had we known in 1999 when we bought this property that this was a risk, we could have certainly made an informed choice about whether to invest in our dream home or not.’

Lincolnshire County Council along with Irish company Tamar Selby Group Ltd have the power to open the quarry under Review of Old Mineral Permissions (ROMP) legislation.

But the couple say at no point were they made aware of its ROMP status and have since been embroiled in a row with town hall chiefs.

Barbara believes her family have not been able to have a fair say on the matter and has accused the local authority of ‘railroading’ the decision through.

She added: ‘It just feels like it’s all getting railroaded through and it doesn’t matter what we say.

‘If you were to apply for a brand new quarry on that site, would you get permission? The general feeling is no.

If this is a new quarry, you would never allow it because it’s far too close to residential property.

‘Technically, it cannot be refused. The planning application being discussed currently isn’t whether the quarry can open, it’s to agree on the planning standards it will operate under.

‘Because permission has already been given, if the council refused permission for any reason or try and stop it, the operator is free to claim compensation from them.

‘I also own land that forms part of a ROMP and I had no idea. So I actually own a quarry. 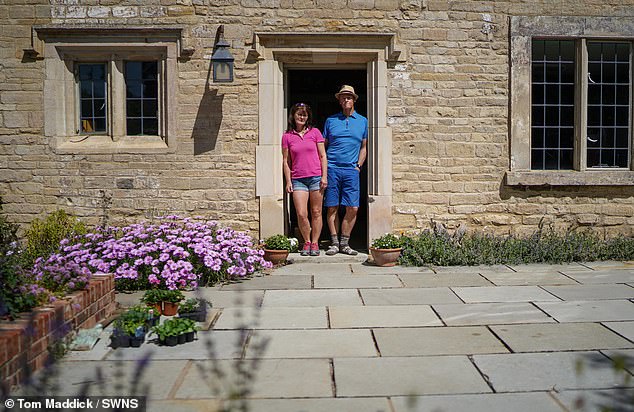 ‘We just find it absolutely staggering that you could buy a home and not realise that you’ve got permission for a quarry.

‘Technically, we could apply for the same planning conditions as they could – but that’s just preposterous.

‘We don’t believe its the fault of our solicitor because our neighbours are in exactly the same boat, it’s just the information is not available, certainly readily, in the public domain.’

The couple say they do not know what their home – which dates back to 1590 – is now worth, but other properties in the nearby area are valued, on average, at over £350,000.

A public consultation has been delayed due to the coronavirus lockdown and residents were given 30 days on April 30 to lodge their final appeals.

Barbara added: ‘I did actually get a hydrogeology report but every concern we have put to the council, has just been dismissed

‘Part of disbelief about all this is how little you’re protected by legislation.

‘If this is was a factory, they wouldn’t just be allowed to leave it alone for 50 years and then say, ‘you know what? We’re gonna just work from there and it will all be fine because we could do it 50 years ago’.

‘They would have to adhere to all modern factory standards. In this situation, it doesn’t seem to matter.

‘I don’t know how much our house is now worth but it will be worth a lot less if there is a quarry next to it.

‘In quarry terms, it’s tiny, but the impact is huge. It’s hard to imagine that this could possibly be viable. We have the remains of a medieval moat near the house and that is home to an extremely large colony of great crested newts.

‘The other thing about it is what was true 50 years ago, isn’t true now.

‘Back then, we didn’t know about dust inhalation and how bad it is. They weren’t consciously protecting the environment and wildlife. 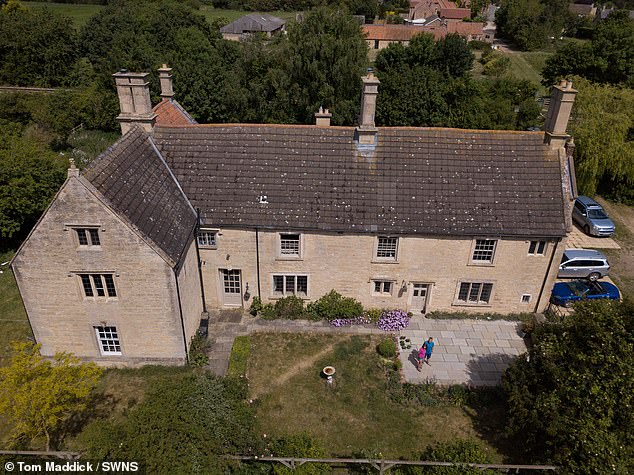 Properties in the area fetch upwards of £350,000 on the market, though the Campbell’s home is set to be much higher given the addition of land with the building

‘There are children walking up and down this road. There are lots of walkers, people pushing prams, cyclists, runners and all the rest of it.

‘The planning application said the majority of small particles, the particles that are dangerous to health, will drop out in the first hundred metres.

‘Well great, but we live in the first hundred metres. My property extends right up to the quarry boundary.

‘We’ve built our horse arena, right up against the quarry boundary.

‘Had I known that was a quarry at the time, there’s no way I would put an arena there because it will be unusable.’

Neil McBride, head of planning at Lincolnshire County Council, said: ‘The quarry on Rookery Lane has had planning permission since the 1950s.

‘We have, and we will continue to engage with local residents, local highways teams, public health and the environment agency, amongst others, to find the most acceptable and sophisticated planning conditions for the site to reopen, so disruption to the neighbouring properties, residents and the environment is kept to a minimum.

‘We are currently in a consultation period, and whilst this has set a timeframe, we will be welcoming comments up until the application is put before our planning committee in the Autumn.’