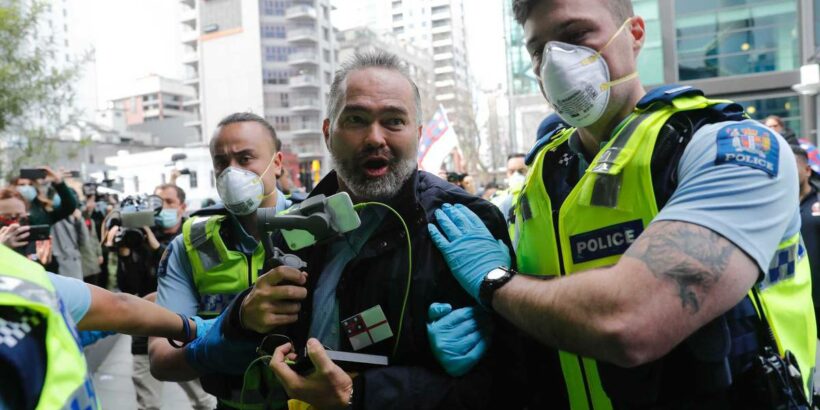 Anti-lockdown activists and Covid-19 deniers have gathered in Auckland’s central business district to protest the snap lockdown – with its organiser being arrested 43 minutes into the event.

Controversial musician and politcal hopeful Billy Te Kahika was leading the gathering, which has attracted about 50 people outside TVNZ’s HQ on the corner of Victoria and Hobson streets.

It started at noon, with police first issuing a warning to him, before arresting him about 12.43pm.

As he was being taken away Te Kahika said he hoped the event wouldn’t turn violent.

Before his livestream of the event cut out, Te Kahika also urged police to take him away as soon as possible to reduce the chance of his assorted supporters causing trouble.

He also told those around him that the police officers attending the protest were good people simply doing their job.

The gathering had heard speeches from Te Kahika and some of his supporters.

One woman described the snap lockdown – initially seven days in Auckland and the Coromandel and three days elsewhere – as a disturbing action.

She also labelled Prime Minister Jacinda Ardern as a “rat” and urged shop keepers and businesses to keep their doors open; something which businesses deemed non-essential are not allowed legally to do.

Another speaker talked about how the Covid-19 pandemic was actually a “scamdemic”.

Te Kahika has been streaming live from the scene, and at one stage was called out by a member of the public for some of the messages he and his supporters have been sharing.

Prior to the protest beginning, controversial Destiny Church leader Hannah Tamaki also went public again with her thoughts on the Covid-19 vaccine roll-out.

She is vehemently against it, posting on social media: “not vaccinated, I don’t hv Covid, I stand by my choice, not 2 be. I’m not afraid to trust my immune system & mostly my God”.

One likened her to a “reckless idiot”, another wrote: “You know there are loads American evangelical churches that did the same and still died right. Act responsibly, if not, keep that dross to yourself .Be part of the solution, not the problem.”