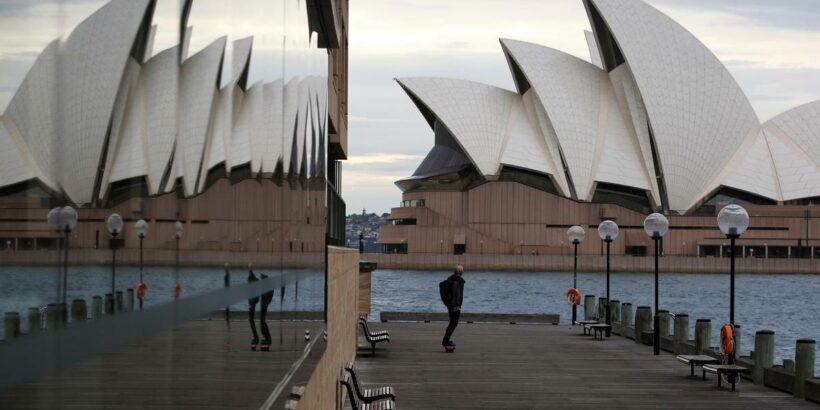 New South Wales has recorded 65 new community cases of Covid-19, with 28 of those cases infectious while in the community.

Of today’s new cases, 40 are linked to a known case or cluster – 27 are household contacts and 13 are close contacts – and the source of infection for 25 cases remains under investigation.

Sydney’s outbreak now stands at a total of 929 infections.

There are currently 73 cases admitted to hospital, with 19 people in intensive care, five of whom require ventilation.

NSW Premier Gladys Berejiklian said while the drop in numbers was welcome, there was still concern about the 28 people infectious in the community.

“That is the critical number that we need to watch in the days ahead. We need to get that 28 number as close to zero as possible,” she said.

Questioned why NSW wasn’t imposing tighter restrictions given the number of people infectious in the community, Berejiklian said the state’s rules were based on health advice.

“We took the action we did when we did to overt medical and health disaster. We stick by our decisions because they are based on the best health advice,” she said.

Berejiklian was then asked to confirm that Greater Sydney wouldn’t still be in lockdown into August but demurred.

“I wish I had a crystal ball,” she said. “I wish I knew where we would be in two weeks’ time.”

In response to the new cases, the mandatory mask rule for the Greater Brisbane area will be extended for another week after restrictions were set to ease tomorrow.

The vaccinated airport worker is a woman in her 40s who works at Brisbane International Airport. She has received her full dose of the Pfizer vaccine and became unwell on July 13. She got tested the following day and returned a positive result.

“We are treating that as three cases in the community and we are a little bit concerned about that,” Palaszczuk said.

Miles said the extension of the mask mandate was “the right decision, based on the best possible advice. The fact is an extra week of masks is better than a lockdown. That is what we are trying to avoid.”

Melburnians are anxiously waiting to see if they will be plunged into yet another lockdown, as the state government weighs fresh restrictions amid a worrying rise in Covid-19 cases brought in from NSW.

Victoria’s testing commander Jeron Weimar said today the state was dealing with “two separate incursions into Victoria over the last three or four days, two chains of transmission” as Melbourne’s outbreak grew to 16.

Five cases are linked to an outbreak the city of Hume, made up of four family members and one other contact after the family returned from a red zone and were not isolating.

The state’s other cases are linked to Covid-positive Sydney removalists who worked at Melbourne’s Ariele apartment complex while unknowingly infectious. There are 680 close contacts linked to that cluster, with 104 of those returning a negative result so far.

A list of exposure sites has been updated and includes the Melbourne Cricket Ground (MCG) after a Covid-positive man visited the stadium on July 10. Three positive cases are now linked to the MCG.

The two week extension of Greater Sydney’s lockdown won’t be enough to bring down Covid-19 cases to a point where authorities can open up, one expert says.

Esterman said even if the state was not aiming to get cases down to zero – Berejiklian has said health officials are focusing on cases infectious while in the community – authorities could not lift restrictions until cases were at least in the single digits.

“Other states also won’t open their borders unless cases are in single digits,” he pointed out.

Esterman said that the virus’ reproductive number needs to be under one in order for cases to come down and it was still at 2.4.

“This is the highest it’s been so at the moment it doesn’t look like the curve is even flattening yet.”

The five-day moving average, which provides a better idea of the trend, is still going up, now at 85 cases a day.

Esterman said it was very difficult to predict how quickly cases would come down at this point but once the curve was flattened then it would be possible to get a better predictive model.

“At the moment we’re not even sure we’re at the peak yet.”

Esterman said epidemic curves, including the one for Melbourne’s outbreak last year, tended to be fairly symmetrical.

If the curve is flattening now in Greater Sydney, Esterman believes this will be seen in the next four or five days as the changes to restrictions introduced on Friday begin to have an impact.

“But the restrictions are still slacker than those in Melbourne last year and it could be that we need further tightening before we see the curve flatten out.

“We all wish NSW the best but at the moment, unless there is some change in what they’re doing, I’m not sure we’re going to see the thing flattening out.”

NSW has been under pressure to tighten its restrictions, and in particular to better define what it means to be an essential worker who can continue working in the community, with many pointing out that shops like Ikea and Harvey Norman are still operating.

However, Berejiklian said yesterday most of the transmission in workplaces had been happening in places like supermarkets or health facilities that have to stay open, and through mobile workforces.

She has stressed the number of cases infectious in the community would be the figure deciding how long lockdown was necessary.

“We have said that the number of infections in the community, we want to get down to zero,” she said. “If we have cases in isolation, that is less of a concern to us.”

She told reporters lockdown would be extended for “at least” two weeks.

“We will know at the end of two weeks to what extent we need to extend the lockdown,” she said.