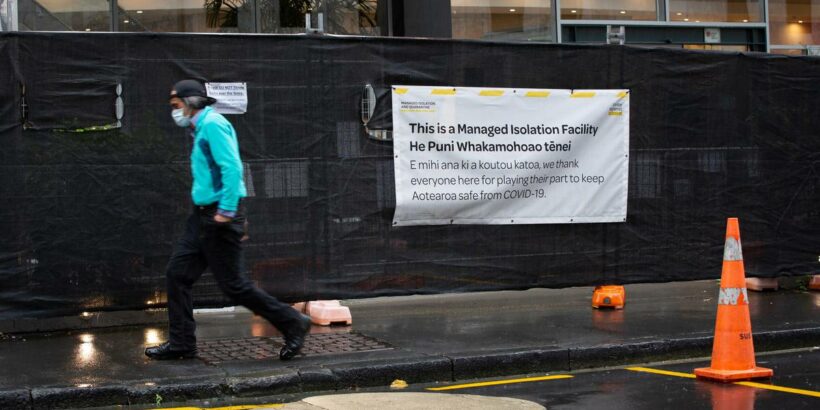 There are 55 new Covid-19 cases in the community today – 41 in Auckland, four in Waikato, three in the Bay of Plenty and seven in Taranaki.

Four of these cases remain in managed isolation, while one has now recovered and been released.

“The recovered case arrived from London via Singapore on 7 December,” the ministry said. “This case tested positive to Covid-19 at day 0/1 and was accordingly closely managed in MIQ. They were never in the community while infectious.

“As an added precaution, 30 other passengers on their flight are regarded as close contacts. To date, 27 of these passengers have completed day 9 tests and returned negative results – testing is under way for the remaining three.

“Health and MIQ teams have been carefully planning for Omicron cases at the border and will continue to manage all arrivals cautiously. This includes isolation and testing requirements for all new arrivals, robust infection and prevention control and PPE measures at airports and MIQ facilities, and frequent surveillance testing of staff who have any contact with recent international returnees.”

Passengers on flights with Omicron cases are required to complete all 10 days at an MIQ facility, rather than spending the final three days in self-isolation.

There are 56 Covid patients in hospital, including six in intensive care or high dependency units.

Ten of those patients are in North Shore Hospital, 26 in Auckland, 15 in Middlemore, two in Waikato and three in Tauranga.

Among new Covid cases in Waikato, three are in Te Kuiti and one is in Tokoroa. One case remains under investigation to determine any links to previous cases.

All three new cases in the Bay of Plenty are linked to previous cases.

Of the seven new cases in Taranaki, four are linked to the Eltham cluster, two are linked to the New Plymouth case and one will be officially transferred to Auckland’s case numbers as they reside there for work purposes but have a permanent Taranaki address.

The eight millionth dose of vaccine – including first doses, second doses, boosters as well as third doses intended for those that are immune compromised – has now been administered in New Zealand. The number is made up of both Pfizer and AstraZeneca vaccines.

“MidCentral and Hutt Valley have now reached 90 per cent first doses for Māori, becoming the fourth and fifth DHB areas to achieve this milestone,” the Ministry of Health said.

Ninety-four per cent of all eligible New Zealanders have received their first dose of the vaccine, and 90 per cent are fully vaccinated.

Today’s update comes as experts call for tightened managed isolation restrictions to keep Omicron out of the community for as long as possible.

Blakely told Newstalk ZB the risk of Omicron getting into the community was now seen as very high.

Each day in New Zealand was a “roll of the roulette wheel in the casino of Covid”.

MIQ was better than it was, but is not perfect.

Blakely said every time a new Omicron person was found in MIQ, there’s a risk it’s going to jump out.

He said things like vaccinating all workers aren’t that great at stopping a person from carrying Omicron out.

Baker agreed, saying “MIQ would never be perfect due to the human factor” but that was why he wanted the Government take immediate action in halting next month’s planned border reopening and instead push it out until February.

He said we needed to continuously update our list of high-risk countries of where Omicron cases were coming from into New Zealand, and carry out more frequent testing of MIQ and port staff as well as air crew.

They were all areas where Covid could – or has – snuck into the country as the source of any of the previous outbreaks was still not conclusively determined, he said.

“One of the most important things is to look at the number of cases coming into MIQ and to adjust our travel policy accordingly.”

The length of time an Omicron person spent in MIQ had already increased from seven to 10 days, but that wasn’t enough.

“Every time an infected person arrives in MIQ you’re increasing your risk of an escape from MIQ and it’s also remembering that our three biggest outbreaks from now … we don’t the exact source of any of them.

“We can’t be totally sure it was only MIQ.”

Omicron should continue to be treated as severe until more was known about it and its impact on hospitalisations overseas.

It was still the same virus and it’s still transmitted the same way – via indoor aerosol and even fleeting contact.

More should be known by New Year’s Eve or New Year’s Day as cases were now increasingly growing in Australia and the United Kingdom and it took roughly a week for the incubation period alone.

“It’s another two weeks before you get sick and or more whether people will start dying.

“We’ve got a lag of about a month before you start to see the adverse effects. It could take even longer.”