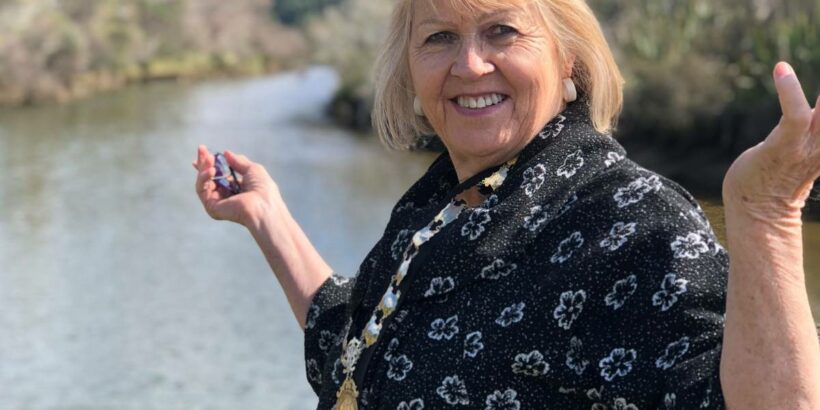 Thames-Coromandel Mayor Sandra Goudie has doubled down on her anti-Pfizer jab stance – adding she believes it is “absolutely wrong” that some people should be mandated to have the vaccine.

Goudie went public this week saying she won’t be being vaccinated until the Novovax vaccine is used, potentially, in New Zealand.

At present, the Pfizer vaccine is used in the nationwide roll-out.

That stance has been criticised, including by Green Party co-leader James Shaw who says people in public, leadership roles should be vaccinated now to ensure the health and safety of people around them.

Goudie said her vaccine decisions were a matter of personal choice, and people should respect each other’s opinions.

Novovax is yet to be approved for use in New Zealand and when questioned about why she wouldn’t get the Pfizer vaccine, she declined to elaborate.

Goudie told Tim Beveridge on Newstalk ZB this morning she wouldn’t be taking part in Saturday’s vaxathon and that she had made her stance clear.

She said it shouldn’t be mandated and people shouldn’t have to lose their jobs.

She said she “reads a lot of information”.

“I’m only going to make comment around that I have a personal choice … I’m not going to vilify people for their choices.”

Asked if she felt a responsibility to explain her reasons to wait for Novovax, Goudie said she wasn’t an anti-vaxxer, she had vaccinations in the past.

“I’m waiting for the Novovax to come into New Zealand.”

Asked if she was encouraging people to get vaxxed, she said she had been buoyed by the numbers of vaccinations in her district, despite then being told by Beveridge the district’s numbers were quite low compared to others.

“My understanding was that [district] was [doing well]. They may have changed,” she said.

Asked about having an obligation, as a public official, to encourage people to get vaccinated, she said people should be able to “have the freedom of choice for themselves”.

“There comes a time when everybody is confronted with these sorts of decisions … if they are in strong positions of leadership. But whose to say that people in positions in leadership can’t also have the right to express their personal choice and freedom.

“Should I be denied that right?”

When told she was being criticised for not explaining her reasons around her decisions, she said she had “that’s my personal choice as well. I have the right to make these choices and decisions.. I’m making these decisions for myself and my decisions should be respected. They’re mine.”

Asked about trusting scientists, she said she wouldn’t “make any comment about that whatsoever”.

Asked about whether she respected the scientific advice in New Zealand, she said: “I haven’t contemplated a view on it.

“Straight off the bat you’re expecting me to respond to that question? Get real.”

Earlier, she told the Herald yesterday she disagreed with those who argued she was putting herself or others at risk by not getting vaccinated

“Obviously I’m not agreeing with them. And I’m exercising my personal choice. And my rights, in terms of the Bill of Rights.”

She said Covid-19 legislation should be consistent with the Bill of Rights.

The High Court at Wellington last month considered if the Covid-19 Public Health Response (Vaccinations) Order infringed on the right to be free from discrimination under the Bill of Rights Act.

After a judicial review, the High Court decided that it did not. The case emerged after a sacked Customs worked challenged the lawfulness of the vaccinations order.

When asked by Mike Hosking on Newstalk ZB whether public figures should be double jabbed or not, Shaw said they should be.

“I do, yeah. I think it’s not just being a public figure it’s anybody who cares about ensuring the health and safety of the people around them has that role.

“But those of us who are in [public] I do think that we’ve got an important leadership role.”

“She’s wrong because she actually doesn’t understand how much damage she’s doing, and that’s my concern,” the district’s South East Ward councillor said.

“It’s disgraceful what she’s doing, based on no scientific evidence.”

He said the country was battling a pandemic and the mayor was effectively saying: “I’m more important than this. I can do what I like.”

Gotlieb said the mayor’s stance could undermine efforts to encourage “wavering” people to get vaccinated.

Meanwhile, Otago University infectious diseases expert David Murdoch told Newstalk ZB today that the country was in quite a complex situation with the Delta strain spreading at the moment, especially as people were likely used to the elimination strategy working.

Delta was more complicated and the main tool in New Zealand’s toolbox was the vaccination programme.

It was fast moving and often once cases were confirmed, it had moved on, making its steps hard to follow for contact tracers.

The Government needed to manage that appropriately as well as protect and prepare the health system.

He admitted getting to 100 per cent vaccination in New Zealand was unlikely, but we needed to try and get as high as possible.

New Zealand was lucky to have such a successful vaccine, he said.

Epidemiologist Michael Baker told TVNZ Breakfast to achieve herd immunity for Covid-19, we will need as close to 100 per cent as we can get.

The world would have to rely heavily on vaccines going forward to beat Covid – and not so much on measures such as lockdown.

Acknowledging previous pandemics the world has faced, Baker said the Covid vaccines that have been developed were much better in comparison to vaccines developed against influenza, for example.

“That’s why the idea that we may be able to push down the rate of Covid-19 infection in the future, if we sustain this really high vaccine coverage and using other things,” he said.

“We won’t get back to no virus – zero Covid – but we could keep the numbers really low.

“But it does depend, the main thing, on getting our vaccine numbers up.”

He was responding to comments from Covid Response Minister Chris Hipkins there still wasn’t confidence in the Covid situation in Northland, due to the reluctance of two women travellers on sharing information.

Hipkins said it was difficult to know how responsible they were in their travels because there was limited information on their travel.

Police have also been called in to find a woman from Māngere in South Auckland who tested positive for Covid-19 but absconded from her home and cannot be found.

The Herald has chosen not to name the woman, in her 40s, but can reveal she is well known to police, is gang-connected and has been the subject of a number of public appeals this year to locate her for alleged criminal offending.