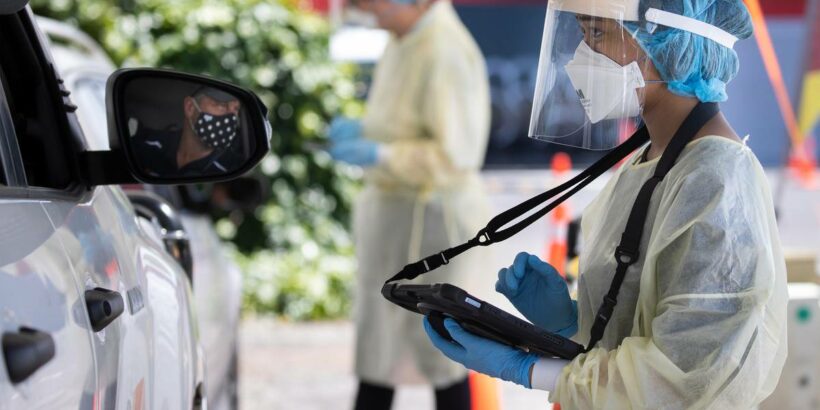 There are 208 Covid-19 cases which have been reported in the community – a dip on yesterday’s record number of infections.

The new cases are across Northland, Auckland, Waikato, Lakes, Bay of Plenty, Hawke’s Bay, Wellington, Nelson Marlborough and South Canterbury. One of the new cases in Marlborough was staying at the Tahuna Beach Holiday Park but its source is currently a mystery.

Twelve people are receiving hospital care across Auckland, Waikato, Rotorua and Christchurch. One person is in an intensive care unit in Rotorua.

Nineteen new cases have been identified at the border among recent returnees.

There are seven new cases in Northland and one in Nelson Marlborough were reported after the Ministry’s cut off time, and will be added to case numbers later.

There were 48,947 booster doses administered yesterday, lower than the record daily high on Friday.

Almost 5,000 paediatric doses were given out yesterday.

There are 14 new cases in Northland today, seven are being reported in today’s numbers and seven more that were notified after Ministry’s cut-off time and will be added later.

In Auckland, there are 128 cases. More than 2000 people are self isolating at home, including 861 cases.

Of 49 new cases in Hamilton, 23 are linked to other cases and the rest are under investigation.

Twenty have been reported in Hamilton, two in Ohaupo, one in Cambridge, one in Huntly, one in Matamata, one in Walton, and the remaining with locations under investigation, the Ministry said.

One new case in Rotorua is linked to a previously reported case.

Four out of five new cases in Hawke’s Bay are linked to previous cases, and one remains under investigation.

A household contact of a Whanganui case has tested positive but was isolating previously, so there are no new locations of interest at this stage.

The case was first reported yesterday in Waikato’s figures, as they were recorded as having a Waikato address.

There are three new cases to report in the capital today. Three more cases in the wider Wellington region are registered to Auckland addresses and have been included in Auckland’s case numbers today.

All cases are isolating at home – four are in Wellington city and two are in Porirua.

One new case in the Nelson-Marlborough region has been linked to an Air New Zealand flight on January 23. There are four new cases in the area today, but one will be added to the Ministry’s numbers later.

Two of these cases are household contacts of known cases and have been in quarantine during their infectious periods, the Ministry said.

The source of infection for a fourth case, identified while staying at the Tahuna Beach Holiday Park, is currently a mystery.

Mobile testing is being offered at the park until 3pm today.

The infected person stayed at the holiday park between January 30 and February 5.

A new case detected in South Canterbury is currently staying in an MIQ facility in Christchurch, the Ministry said.

The case’s Timaru-based household contacts are all isolating and have so far tested negative. Public health staff are not expecting any Timaru locations of interest arising from this case.

New Zealanders over the age of 18, who are due for their booster jab, and being urged to get it now.

“With Omicron in New Zealand, one of the best things you can do is get your booster as soon as it is due,” the ministry said today.

“Boosters lower your chances of getting very sick and being hospitalised. Being boosted also helps slow the spread of the virus.”

More than 1.5 million booster doses have been administered – meaning 50 per cent or half of the eligible population have now received the booster jab.

Yesterday the highest number of daily cases in New Zealand was recorded – 243 – since Covid-19 entered the country in March 2020.

The previous record was 222 daily community cases on November 16 last year at the height of the Delta outbreak.

The spike was to be expected, the Ministry of Health said, and was a reflection of Omicron rapidly spreading in the community as the variant has done in other countries.

Holidaymakers over the long weekend are being reminded they will need to remain where they are if they are identified as a close contact, get Covid-19 symptoms or test positive for the virus.

The ministry says it is important to have a plan.

“There may be extra costs involved in paying for additional accommodation and changing your travel plans.”

Among the latest locations of interest is a Jetstar flight from Auckland to Wellington on the morning of January 31, as well as a F45 gym training session in Auckland’s Mt Eden on January 26 and locations in Tauranga, Rotorua and Porirua.

But while case numbers are soaring, so too are the number of people receiving their booster shots.

Yesterday the ministry said a record daily total of 66,864 were administered on Friday. More than 1.5 million booster jabs have now been administered in total.

Anyone over the age of 18, who is due for the booster dose, is being urged to get one as soon as possible to lower their chances of needing hospital care and to slow the spread of the virus.

“Anyone with any cold or flu symptoms that could be Covid-19 is asked to get a test and isolate at home until a negative result is returned,” the ministry said.

“The most common early symptoms of the Omicron variant are a sore or scratchy throat, and a runny nose. Even if you develop a small sniffle, please get a test.”

Ten people with the virus are in hospitals across Auckland, Rotorua and Christchurch, including one person in intensive care.

Meanwhile, an expert believes New Zealand is likely to flatten the curve quicker than Australia.

“Some of the Australian states had a very unfortunate ‘let it rip’ attitude, especially New South Wales and so at the start of the Omicron outbreak, they had minimal controls in place,” said University of Otago epidemiologist Professor Nick Wilson.

New Zealand by contrast has much better use of masks and its traffic light system in place, he said, and a higher full vaccination coverage.