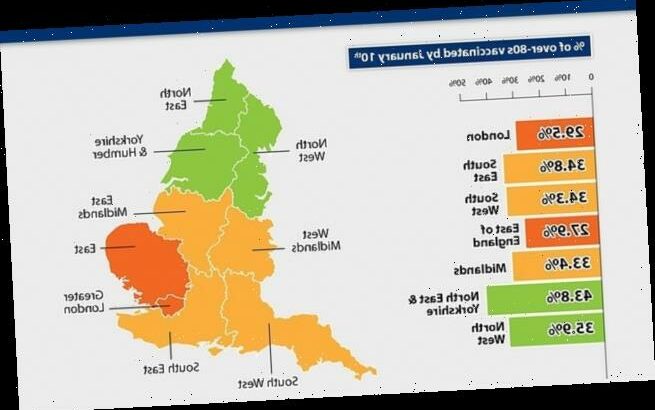 Coronavirus vaccines are being diverted to areas struggling to get enough jabs into the arms of the over-80s, the Health Secretary has said, as it emerges elderly Britons may be missing appointments because GPs are contacting them by text.

Matt Hancock vowed last night to send more doses to regions where the roll out was lagging, which are thought to include London and the East of England.

Both had vaccinated less than 30 per cent of their over-80s by January 10, the latest data available, while in the North East almost 50 per cent had got their first dose.

The Health Secretary added that some areas, which have not been named, had already jabbed the ‘vast majority’ of their over-80s.

It comes as a GP helping to organise the vaccine roll out in Sheffield suggested elderly Britons still waiting to be asked for an appointment should consider contacting their local surgery in case they have been missed.

‘I think now if people are over-80 it’s probably reasonable to sort of let us know that you have been missed because we might not of had your mobile phone number or we might not of been able to get hold of you by text,’ he said. 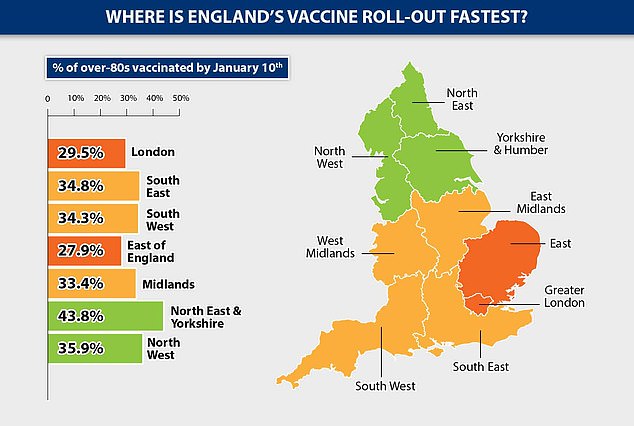 The Health Secretary told a Downing Street press conference last night: ‘We’re prioritising the supply of the vaccine into those parts of the country that need to complete the over-80s.’

Mr Hancock revealed yesterday that more than 4million people in the UK have now received a vaccine, including more than half of over-80s and care home residents.

He heaped praise on Slough in Berkshire for having vaccinated all of the town’s elderly care home residents, a feat matched by Newcastle upon Tyne.

Dr Hart today warned some over-80s may have missed appointments because they haven’t checked their phones for texts from their GPs.

‘We obviously want people to be vaccinated but the difficulty for us has been the short notice of supply which has meant we’ve had to contact most people by mobile phones and by telephone rather than sending letters and having a more staged planned approach,’ he told BBC Radio 4’s Today programme.

The Northern Ireland Secretary Brandon Lewis also said today there would be ‘some overlap’ between getting the last over-80s vaccinated and lower priority over-70s in some areas.

He told LBC: ‘We’re very clear that areas should be getting through the majority of the first cohort before they move on to the second cohort, but there will be an overlap.

‘The reality is as you’re moving through these, as you start to bring the second cohort in, there will be a bit of an overlap.

‘So while they’re still finishing cohort one some people from the second cohort will be having their vaccines and being contacted.

‘That’s understandable because the other alternative is you get through cohort one and you pause before you can start getting cohort two in and that would be wrong.”

He added: ‘In order to keep things flowing and moving we will see some overlap, but areas should be getting through the majority of cohort one before they start moving to cohort two.’