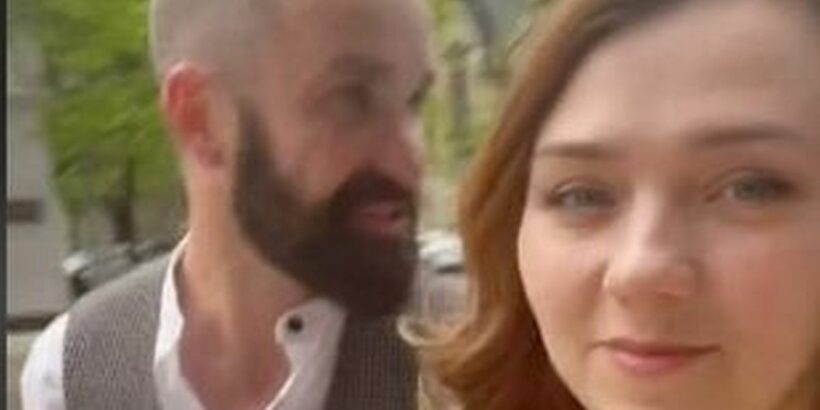 A "crazy" Brit bloke flew nearly 5,000 miles for a Tinder date with a "bonny lass" who lived in the US.

Paddy Campbell, 32, joined Tinder for the first time earlier this year after breaking up with his partner and was chuffed to match with Bridget Kelly, with whom he felt he had plenty in common with.

He mistakenly believed that Bridget lived in Edinburgh, before quickly realising that she was from a town called New Glarus, located across the pond, namely in the US Midwest, in the state of Wisconsin.

Despite the 4,700 miles separating the potential lovebirds, Bridget asked Paddy to join her at a wedding stateside, the Daily Mirror reports. The eager Scotsman readily accepted the invite and jetted across the Atlantic Ocean to meet his match.

Taking to TikTok, before setting off, Paddy explained that he would fly from Glasgow to Dublin on May 16, wait 14 hours there before hopping on a flight to Chicago and then onwards to Bridget's hometown.

The 32-year-old said: "I'm going to America, which is really f***ing scary because I've never been there before."

Although Paddy's own mum was American, born in the state of Ohio, he admitted to feeling a bit "nervous because I don't know how these yanks are going to act, especially when they find out I work in the whisky sector."

Many of Paddy's followers wished him all the very best of luck, expressing an eagerness to find out how the love story would unfold.

One person wrote: "Good luck Paddy have the best time. Life's too short."

Another said: "I can't get a Scottish lad to get the boat to Dunoon to meet me and you're flying to America! What a guy you are! Good luck!"

Meanwhile, Bridget herself was documenting her side of the story over on her own TikTok and addressing her followers she explained that she too had recently ended a long-term relationship and that her ex had told her she needed to "make moves" for herself.

Spurred on by this, she signed up for a Tinder passport, resolving to meet a Scottish guy and move to Scotland, before eventually sticking her pin in Falkirk.

The writer and actor said: "I met this lovely, wonderful Scottish guy called Patrick – Paddy – and he is the sweetest guy. We've been talking for eight weeks.

"After the second week, I told him about a wedding I was helping coordinate, and he said he wanted to help. He wanted to come with me and be my date to the wedding."

In this first vid, Bridget revealed that she'd just picked up Paddy from the airport, and they were heading out to eat dinner together at a "really nice restaurant".

Bridget added: "I guess the moral of the story is, if he wanted to, he would. He flew across the world."

In subsequent video updates, Bridget described their first date as being "easily the best date I've ever been on" and "the best company as well".