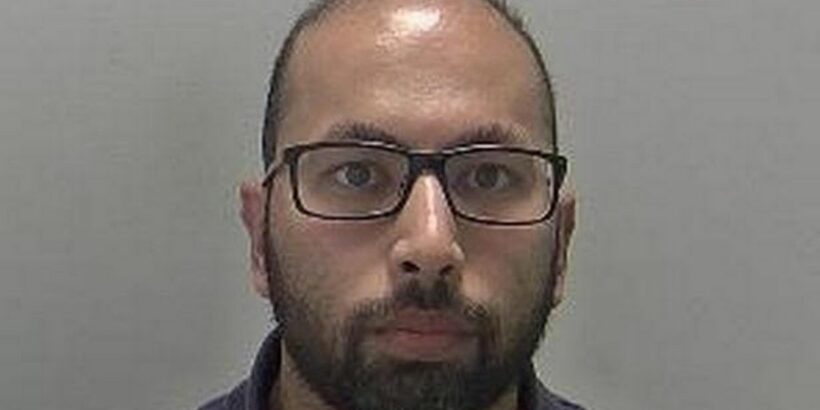 Saad Sheikh spotted his victim after going out with friends while she was taking a walk in the park in the evening.

He approached the woman, who had learning difficulties, and molested her for 15 minutes on a park bench in upmarket Royal Leamington Spa, Warks.

After subjecting her to the ordeal, Sheikh fled the scene before his victim alerted police, who were later able to arrest him.

Sheikh, who is from Coventry, later admitted to two charges of sexual assault, and was jailed for two and a half years in a trial at Warwick Crown Court on Wednesday.

Judge Peter Cooke said Sheikh had an "un unhealthy interest in pornography" while sentencing him, highlighting that it particularly featured older women.

He added that the woman's "vulnerabilities" were "blindingly obvious" but she was still "sought out".

"I am sure you had only one thing in mind and saw her vulnerability as an opportunity, and what unfolded over the next quarter of an hour was a terrifying ordeal for someone with her challenges," he continued.

"You used her as a sexual plaything during that quarter of an hour. It is heartrending to read her impact statement.

"You have an unhealthy interest in pornography, in particular that focussed on women older than you, which surfaced when you were 14, and again now.

"For someone to do as you have done is deeply troubling."

Sheikh assaulted the woman at 10pm on August 1 last year after parking his car near to Leamington Spa's iconic Jephson Gardens and Pump Rooms.

Prosecutor Paul Fairley said: "Having targeted her, he [Sheikh] approached her and asked if he could sit on the bench, and after she agreed, he engaged her in conversation and asked for her number, which she refused to give.

"It is inconceivable that he would not have realised within a few moments of speaking to her that she had vulnerabilities."

Sheikh assaulted the woman, putting his arm around her and touching her inappropriately.

After he fled the scene, the victim reported the horrific ordeal to the police and was able to give a detailed description of Shiekh and his clothes.

In a victim impact statement, she said: "I'm now very frightened. I can't stop thinking about it.

"Before this happened I loved to go out all the time. I don't feel safe doing this anymore."

Sheikh had also previously assaulted three other women, the court heard, including a 76-year-old woman when he was just 14 years old.

Mohammed Latif, defending, said: "He feels ashamed and disgusted with himself and his conduct.

"He wants me to say in open court, for what it's worth, that he apologises for his disgusting behaviour."

Keep up to date with all the latest news by signing up to one of Daily Star's free newsletters here.