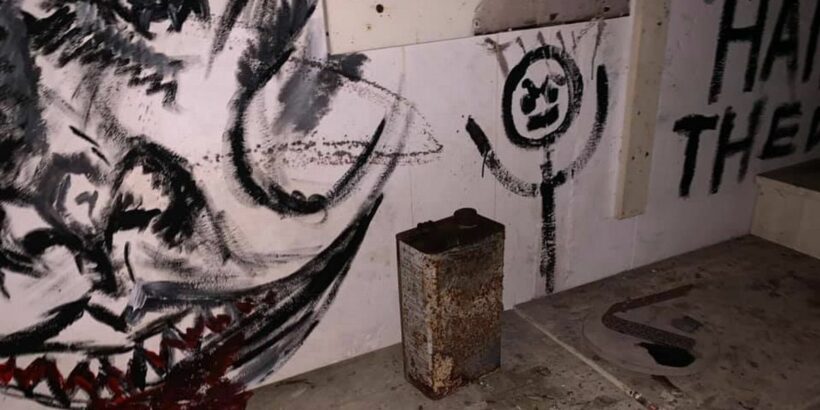 An image of a creepy abandoned hut with a horrifying message on the wall and eerie drawings and has sent Facebook users into meltdown.

Urban explorer Dan Sharkey came across the hut at the back of a plot of land in Lincolnshire, it has been reported.

From the outside, the concrete bunker looks as though it is a small hide-out but unbeknown to passersby, a long metal ladder drops down into a strange bunker.

Once inside, the abandoned hut is littered with graffiti and strange drawings, including a man bleeding from his mouth.

An image of an angry stick man can also be seen painted onto the wall, with an odd red and black tree landscape on the other.

Two rusted metal beds can also be seen in the snap and one even has an old blanket on it.

Above the blanket is a bizarre message, which points to an ominous hole in the bunker, which has sent Facebook users into a meltdown.

Scribbled in black paint on the wall, the message reads: “CRAWL INSIDE

Near the message someone has painted a black arrow pointing to the hole, which wouldn't be able to fit a child in, let alone a full grown adult.

Nonetheless, the creepy snap gained interest from other urban explorers, frightened Facebook users, and daredevils who asked their friends if they'd join them for a visit.

One user joked: "Aw that seems friendly, how was the hug?"

Another said: "Looks like someone with a very dark mind was down there."

Referencing Boris Johnson’s coronavirus lockdown, a third said: "I’m so deprived of human contact, I would of crawled inside, no hesitation."

Others were more interested in what the bunker could have been used form, with several suggesting it was once used by the Royal observation corps.

A fourth added: "Really is a shame every abandoned place gets trashed, some of these places in pristine condition could easily become attractions."