How cruises will change after Covid: End of the traditional buffet, reduced shore visits and temperature controls amid new safety measures on board ship

Major cruise line companies are ditching self-service buffets while on-board entertainment could also be cut as part of a raft of changes to trips in the wake of the coronavirus crisis.

Guests and crew may also have to be tested for the virus in some cases, or at least pass through infrared controls so their temperature can be taken in a bid to reduce the risk of infections spreading.

Other measures include limiting passenger numbers and staggering boarding and disembarking to ensure there are fewer people at the terminals and gangways. 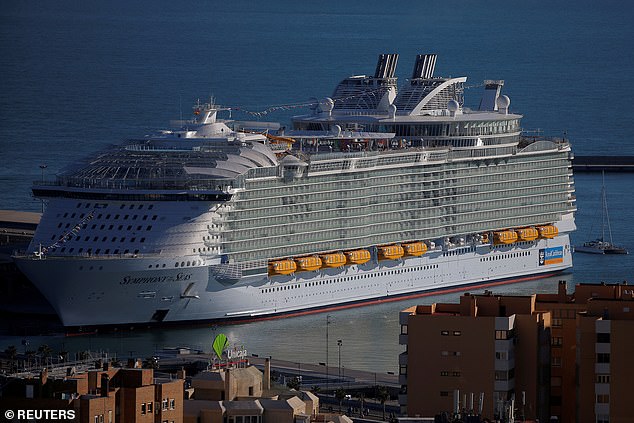 Major cruise liners, such as Royal Caribbean’s 362m-long Symphony of the Seas, are having to make a raft of changes in the wake of the coronavirus crisis

On the ships, hand sanitisers will be placed throughout, germ-killing air filters will be installed and occupation of lifts will be limited.

At least one cruise liner has had to cut back on its hospitality by axing plans for the traditional welcome with a free buffet whilst others say only staff will be allowed to serve food and never the passenger.

Top locations such as Spain still currently have a ban on any cruise liner entering its ports, with the government saying this will continue until ‘the end of the coronavirus crisis’, with no firm date yet specified.

Despite delays in cruise liners beginning their schedules, start dates are slowly being revealed and behind the scenes, work is progressing on implementing the wide range of coronavirus prevention measures to safeguard holidaymakers and crew.

A conference organised by the travel media site, Hosteltur.com saw cruise industry leaders confirm that the days of the traditional buffet were over and major protocols were being planned.

Commercial director of Costa Cruises, Jorge Serrano said: ‘We are all working 100 per cent to recover the product.’

As with air travel, passengers will have to fill in health forms which will also allow tracking in case of any coronavirus outbreaks and temperatures will be taken, probably more than once during the voyage. People from risk groups may be asked for additional health information to ensure their safety

Dinner shifts may be established if needed and in some cases, there will be an occupancy limit in the dining rooms: potentially 50 per cent.

‘Buffets’ will be changed in that the food will be displayed behind screens and only served by waiting staff.

There will be extensive cleaning and disinfecting of the ships on a regular basis, together with the use of electrostatic sprays throughout the trip and the installation of medical grade air filters, H13 HEPA, which eliminate 99.95 per cent of airborne pathogens. 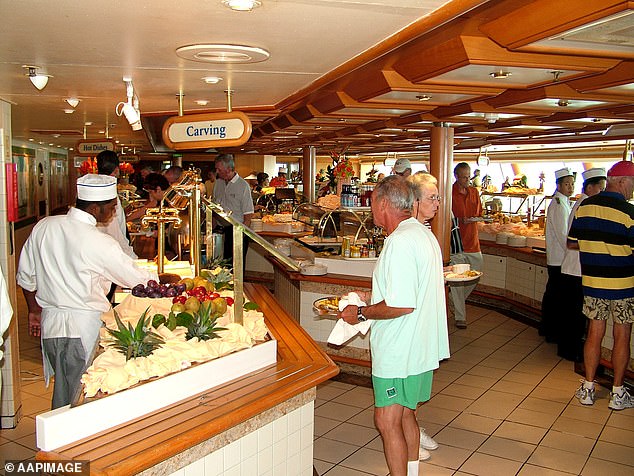 Buffets, which are regularly among the most popular attractions on cruises, will be changed in that the food will be displayed behind screens and only served by waiting staff

The majority of the cruise companies are saying that the ratio of staff to passengers may have to be increased, which suggests cutting the number of customers on board, although some cruise experts say some of the big names were working towards this trend anyway.

There will be social distancing throughout the ships with markers on the floor and limits on the lifts. Changes will also be made to the way entertainment is presented.

Some cruise companies have already detailed the changes on their websites, including Norwegian Cruise Lines which is putting in new air filtration systems, enhancing health screening before and during trips, staggering embarkation, reducing capacity in all public areas, increasing medical resources and adapting port visits.

Mundomar Cruises says it has been working with experts for months to come up with a wide range of protocols for trips, both before and during, including stepping up health screenings, increased sanitation, constant monitoring of crew, medical teams traind in coronavirus and hand sanitisers throughout the ships.

Regarding meals, it says: ‘Where possible, food service will be by crew members, with crew manning all food stations, including the buffet and ice cream machines.

‘If not possible due to layout restrictions — many Princess buffets on new or refurbished ships have serving islands to reduce traffic, making crew service nearly impossible – dedicated personnel will be posted to monitor these stations and ensure they are cleaned and sanitised regularly.’

A spokeswoman for Royal Caribbean UK said: ‘We are have been taking steps to address our future and we are focused on all aspects of our safe return to service strategy with special emphasis on safety, security and health. There will be further announcements on what this looks like in the coming weeks.’