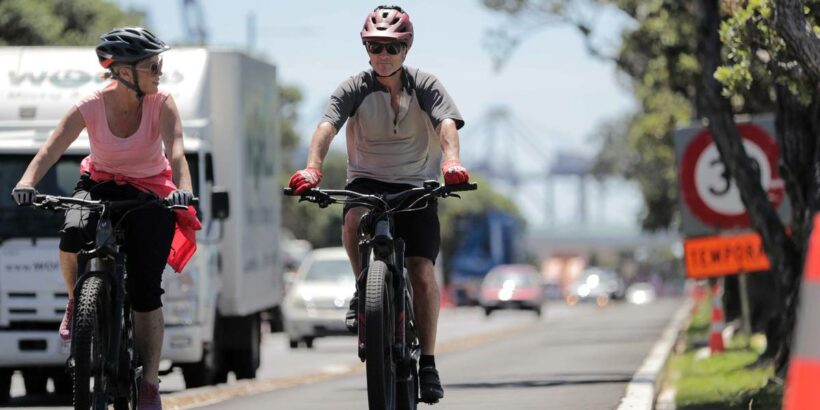 Auckland Council voted to endorse the plan to speed up cycleway construction in the city, especially on main routes and around schools and local centres.

Councillor Angela Dalton told a meeting of the council’s planning committee that she knew her daughter’s 9-year-old twins “would happily scooter or ride to school, if it was safe”.

And, she told councillors, teachers would not be losing their car parks. That idea did not survive the process of writing the plan.

“The way I see it,” she said, “if there’s spare space, let’s take it off the car parks and build bike sheds. But this is not about taking parks away from teachers.”

Safety wasn’t the only issue. “This does not sit in isolation,” Dalton said. Along with the car parking strategy and safety goals, “it’s another lever as we work towards our emissions reduction targets”.

The planning committee which approved the plan comprises all the elected councillors, two people appointed by the Independent Māori Statutory Board (IMSB), and the mayor. The vote was 13-3 in favour, with seven abstentions.

Chetwynd said that’s about 1 per cent of AT’s total budget.

The proposal now was to speed up that spending, and to note that if Auckland was to achieve its carbon emissions and Vision Zero safety targets, another $1.7 billion would be needed.

But the extra money has not been allocated. During the meeting, mayor Phil Goff and several councillors expressed the hope that “Government or some other source” would provide it.

AT’s deputy board chairman, Wayne Donnelly, told the committee that “public debate will be intense and it’s important to have that debate. In reality, not all the projects will happen. There is detailed planning and consultation on each one to come.”

IMSB members Karen Wilson and Tau Henare both abstained in the vote, although they were not opposed to giving priority to cycleways.

“Let me make it abundantly clear,” said Henare, “that Māori have not been consulted properly. It’s another case of Māori not being taken seriously.”

Councillor Desley Simpson, who also abstained, said they were still working on their annual budget and they should leave this to the new council.

Councillors Wayne Walker, Christine Fletcher and John Watson said they supported cycling, but abstained from the motion over concerns about the process.

Goff said councillors couldn’t keep saying they support cycling and voting against proposals to do something about it. He was especially keen on safe cycling for schoolchildren. “If parents didn’t run their kids to school,” he said, “there would be a 15-20 per cent reduction in traffic.”

Councillor Daniel Newman was opposed. He said he didn’t want road space used for bikes but he also didn’t think the ambition was big enough. “It’s farting against thunder,” he said.

Councillor Pippa Coom pointed out that the old Auckland Regional Council had bigger cycleway goals than AT does now. “Unfortunately it’s dropped away, so here we are in a climate emergency and we’re still not actually delivering a network.”

She supported the motion. “People want action on the climate and greater safety,” she said, “And we know the way to do this is to provide safe, connected infrastructure.”

Councillor Efeso Collins said he’d been at a Rotary Club meeting the previous evening where many people were “very frustrated” at the focus on cycling. “But once we spoke, we all had a better understanding.” He voted yes.

Councillor Greg Sayers, who voted no, said, “The ideology that if you build it they will come has proven itself to be a failure.”

Councillor Shane Henderson invited Sayers to ride with him on the Northwest Cycleway and see how busy it is. “We’re the ones with congestion now.”

Councillor Dalton said it was the same on the new Southern Pathway. “It’s filled with people. Families, children, I don’t know where they all come from.”

She also said, “Fundamentally this is about providing choice. It doesn’t remove cars. It simply provides a choice for those who want it.”

Is Auckland too wet and hilly?

The council’s transport strategy team has compared cycling in Auckland with other cities in New Zealand and elsewhere.

Cycling accounts for just 1.0 per cent of all commuter trips in Auckland. In Wellington, which is far hillier, it’s 2.5 per cent. In Nelson, also a hilly city, it’s 6.1 per cent.

The report also tracked transport trends in London over the 20 years to 2020. It showed a slow decline in trips by cars, slow increases across all forms of public transport, and a fast rise in cycling.

How did they do it? The two big factors were the introduction of congestion charging and the construction of cycling networks, including “cycle superhighways” on the main routes. Those two things are critical to keeping London traffic moving.