A cyclist who came with inches of being crushed by a lorry is pleading for safety improvements on a dangerous road.

Carol Atkin was left with cracked ribs when she fell off her bike while travelling to work in the early hours of Friday.

Shocking video footage filmed by her helmet camera shows her trying to stand up and move her damaged bike out of the road when a lorry almost strikes her on the A38 in east Staffordshire. 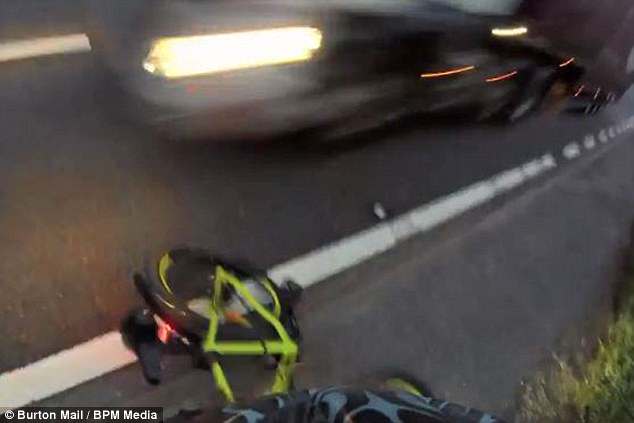 Ms Atkin, who is in her sixties, said: ‘As you’re going towards the traffic, if there’s any rain it’s terrible.

‘What I tend to do to go further off the route, as it’s too dangerous. On this particular day, I missed my turn-off, on my bike and then I was on the A38 where it’s designed as a cycle way.

‘It’s highly dangerous. On a motorway you’ve got a hard shoulder then the road, but on the A38 you’ve got a thin section, and it’s utterly horrendous.

‘I went off through the car park to avoid the dangers, then just as I got round the corner, that’s when I came off. Basically, you’ve got nowhere. Part of me was in the road.’

Ms Atkin believes that more needs to be done to improve the safety on the stretch of road for cyclists.

What does the highway code say about cyclists and dual carriageways?

There is no law against cycling on dual carriageways but riders do so at their own risk as cars can travel up to 70mph on them.

Rule 75 of the Highway Code tells cyclists to ‘remember that traffic on most dual carriageways moves quickly. When crossing wait for a safe gap and cross each carriageway in turn. Take extra care when crossing slip roads’

She said: ‘The local authorities want you to cycle but I was really injured. You can see how close the lorry came to me.

‘Sometimes these lorries are right next to you, they’re almost touching you. I cracked my ribs and ruined my bike, buckled the wheel.

‘They need to think about putting safety in for people on that route. I think what they need to do is put barriers. I think more could be done and there’s some areas where they could widen it.

‘My health is important to me. I’m a mountaineer, I’ve cycled from Land’s End to John o’ Groats, mainly back-packing, it’s what I do. I do keep myself fit for my age.’

Carol said she still has no real idea why she came off her bike at that particular spot.

Her route along the A38 each morning is roughly six miles, however she normally goes on the B5016 through Barton, despite being a longer route in order to avoid parts of the A38 that she claims are more dangerous.

She added that although she is a big advocate for healthy living, she has been put off cycling ever since the incident. A spokesman from Highways England said the section of path that Ms Atkins was riding down is not actual a cycle route, however it is looking to assess the location to prevent any similar occurrences in the future.

The spokesman said: ‘We are sorry to hear that the cyclist was involved in an incident on our network and are pleased they are not seriously hurt.

‘We will arrange to review the location to see if any immediate measures can be implemented to prevent a further incident occurring.’