Seattle: The two mountain bikers did what they were supposed to do when they noticed a mountain lion tailing them on a trail east of Seattle.

They got off their bikes. They faced the beast, shouted and tried to spook it. After it charged, one even smacked the cougar with his bike, and it ran off. It wasn't enough, authorities said. 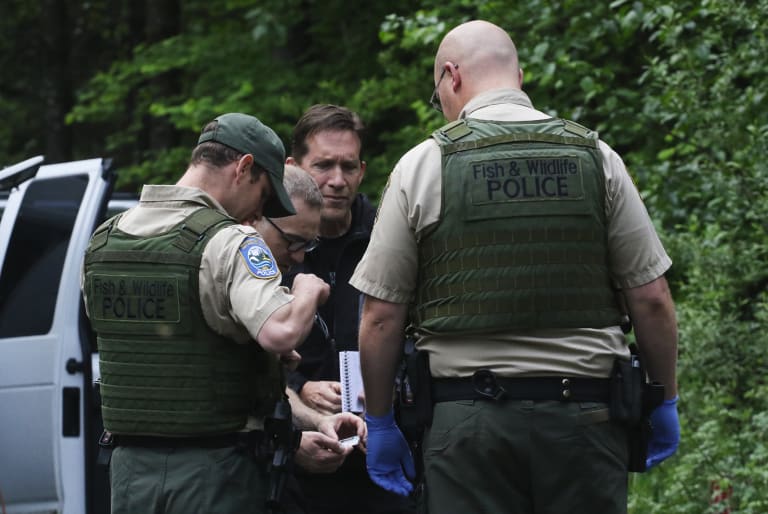 Washington State Fish and Wildlife Police confer with an individual from the King County Medical Examiner’s Office and a King County Sheriff’s deputy on a remote gravel road following a fatal cougar attack on Saturday.

When they got on their bikes again, the cougar returned, biting one of them on the head and shaking him. The second cyclist ran, and the animal dropped the first victim and pounced on him, killing him and dragging him back to what appeared to be its den, King County sheriff's Sergeant Ryan Abbott said.

"They did everything they were supposed to do," Abbott said on Sunday. "But something was wrong with this cougar."

The attack near North Bend, in the Cascade Mountain foothills 50 kilometres east of Seattle, on Saturday was the first fatal cougar attack in the state in 94 years.

The 31-year-old Seattle man who was bitten first survived. Rescuers flew him to a hospital, where he was in satisfactory condition on Sunday, Harbourview Medical Centre spokeswoman Susan Gregg said. 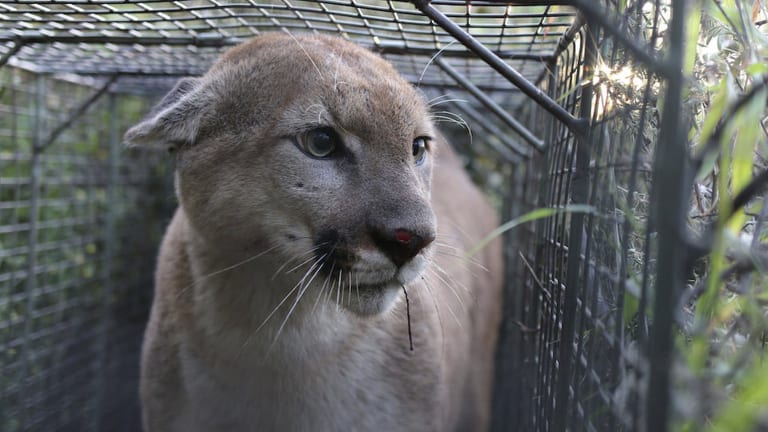 A file picture of a cougar in the US.

Authorities would not confirm the names of the cyclists until the deceased victim, a 32-year-old Seattle resident, was formally identified. That was expected on Monday.

After the cougar attacked the second man, the first managed to get on his bike and ride off, looking back to see his friend being dragged into the trees, Abbott said. He rode for three kilometres before he could get a mobile phone signal to call 911.

When rescuers arrived, it took about half an hour to find the second victim, who was dead with the cougar on top of him in what appeared to be a den-like area.

An officer shot at it, and it ran off. Several hours later, Washington Department of Fish and Wildlife agents used dogs to track it to a nearby tree. They shot and killed it.

Authorities plan to match DNA taken from the animal with DNA from the victims to be certain they killed the right cougar. They also plan to examine the cougar to see what might have been wrong with it.

There are about 2000 cougars in Washington. Until the 1960s, the state paid hunters a bounty for killing them. Now, it allows 250 to be hunted in 50 designated zones.

While they are sometimes known to kill livestock or pets, and though one even found its way into a park in Seattle in 2009, encounters with people in Washington state are rare.

Experts say that people encountering the big cats in the wild should stop and pick up small children immediately. Because running and rapid movements can trigger the animal's prey drive, don't run. Instead, face the cougar, speak firmly and slowly back away – appearing as large as possible, such as by standing on a rock or stump or opening a sweatshirt or jacket.

Keep your eyes on the animal and become more assertive if it doesn't back off. And if it does attack, fight back.

"The idea is to convince the cougar that you are not prey, but a potential danger," Fish and Wildlife advises on its website.