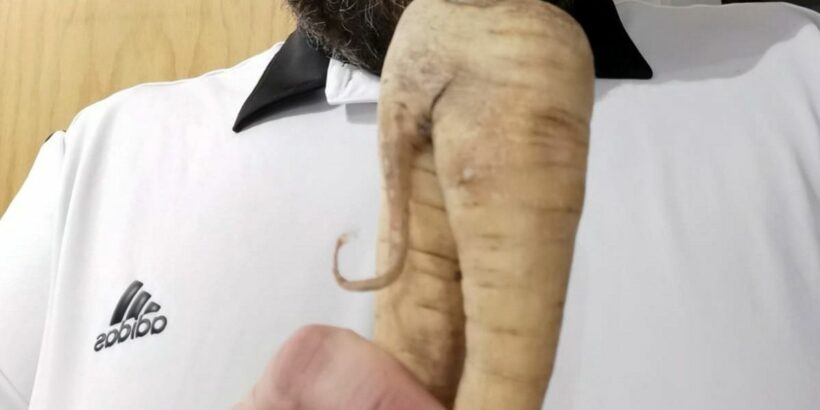 A Tesco shopper and his wife were left "rolling around laughing" after finding a parsnip shaped like a man's genitals inside a bag of veg, before they gobbled it down for dinner.

Matthew Whitaker, 44, was stunned to pull out the phallic parsnip from the 19p bag of veg, which prompted a laughing fit from his wife Amy, 34.

It is the second time Matthew has found a rude veg – two years ago he pulled out a carrot that looked like a tiny penis in between two legs, much less impressive than the appendage on the latest veg.

The father-of-two joked: "How lucky am I?

"I thought oh no, not again – why do these rude vegetables keep finding me?"

Matthew picked up a bag of parsnips during his weekly shop at Tesco in in Penzance, Cornwall, last week hoping to have them with his dinner.

But when he returned home, he opened the bag to find a well-endowed vegetable which was shaped like bottom half of a man proudly posing with his penis out.

Matthew and his wife of nine years Amy fell about laughing when they saw it.

Two years ago, the couple, of St Just in Penwith, Cornwall, found a carrot with a rude-looking appendage from a bag of shopping they'd had delivered from the same store.

Delivery driver Matthew said Amy, a support worker, called him into the kitchen to show him the hilarious X-rated find.

The couple usually buy wonky carrots, but their local store did not have any in when they ordered – and Matthew quipped they sent "winky" ones instead.

Matthew, originally from Bradford, West Yorkshire, added: "We had a good laugh about it, it's the second time I've found a rude vegetable from the same Tesco.

"I guess it's just luck that I find the funny ones. I just need a rude swede now and I'll have a full set."

Matthew sliced the parsnip and the couple ate it on a roast dinner.