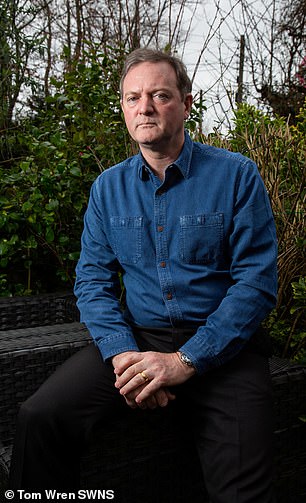 Neil Boxall, from Yeovil, Somerset, pictured, has taken his 12-year-old daughter out of school claiming she suffered from 40 symptoms because of from wi-fi radiation

A father has pulled his daughter out of school claiming the 12-year-old has suffered wi-fi radiation – causing over forty symptoms including itchy eyes and headaches.

Neil Boxall, from Yeovil, Somerset, removed his daughter from Leweston School in Sherborne, Dorset, and decided to home-school her from January this year.

Engineer Mr Boxall said: ‘There were some signs in Year 7. She got itchy eyes, she started having headaches, and she was having difficulty concentrating.

‘But it didn’t really come to a head until she started Year 8. There was a period in December where she got really bad and had to go to the school nurse.

‘Then we went for a meeting at her school, and we realised that there were wi-fi access points in all the classrooms.’

The father explained how his daughter had a couple of weeks off and he and wife Evelyn asked the school to turn the wi-fi off in their daughter’s classroom. 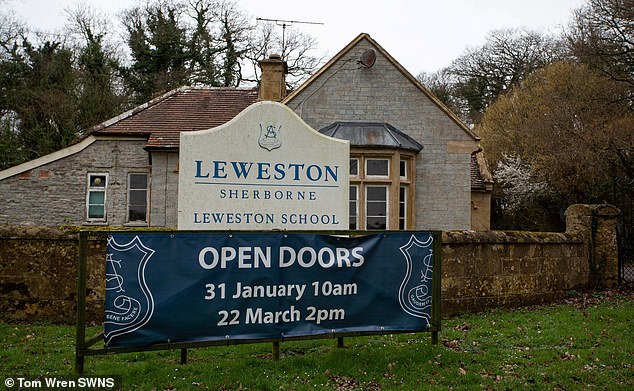 Mr Boxall says his daughter symptoms have disappeared since she was pulled out of Leweston school, in Dorset, pictured, in January and they started to home-school her

Mr Boxall said: ‘When she went back to school, that seemed to work. But after the Christmas holidays the school decided they weren’t going to continue doing that.’

It was then that the parents decided to remove their daughter and home school her.

Mr Boxall said: ‘It was a bit of a shock to the system for her at first, switching to home-schooling.

Redness of the face

Feeling out of control

Pain and / or stiffness in joints and muscles

Excessive trips to the loo

Since being home-schooled Mr Boxall’s daughter’s symptoms have disappeared and he first shared his worries in a letter to the Western Gazette in Somerset.

He said:’ It would seem that, as is often, children “manage” such symptoms and don’t want to make a fuss of them. What else is going on in the body, we dread to think.

‘The absolutely crazy thing about wi-fi is that the Access Points (usually located on walls or ceilings or indeed hidden) transmit strong signals continuously, even when no-one is using the Wi-Fi.

‘I have heard that the school register can only be taken using a wireless tablet. How ridiculous is that?’

‘Incidentally, there may be other ways to connect wirelessly without the risk of harm.

‘For instance Li-Fi modulates light (abundant and natural) – although systems such as Li-Fi are in their infancy.

‘Over the last year too it has been noted in the media that increased screen time is associated with increased ill health.

‘Many screens are used wirelessly it would seem. Some, as in homes and offices, are not.

‘What a good time to review wireless use and start cutting back on it for the sake of yours and the planet’s future.’

Ending the letter, Mr Boxall even linked a fall in human fertility to the conception of wireless.

They wrote: ‘Some people say ‘we can’t do without all this’.

‘But without doing something about it, we will be no more – along with the insects and other creatures whose numbers we hear are decreasing alarmingly.

‘Human fertility has reduced by some 60 per cent in the last 30 or so years – the same period over which wireless has been introduced.

‘There have been numerous appeals and declarations over recent years to the WHO and the UN.

‘Is it therefore not time to think about our future and start reducing reliance on wireless and find other, better ways to do things?

‘Much is talked about environmental pollution these days. This wireless radiation, given its prevalence, is pollution like no other,’ the parent concludes.

Mr Boxall also said that he has been affected with some Wi-Fi radiation symptoms in past jobs.

He said: ‘I used to get really bad dizziness. In one place I worked it was so bad I had to leave.’

He said the family have ethernet cables to connect them up to the internet at their home in Yeovil, Somerset.

A spokesperson for Leweston School said: ‘The health and welfare of our students is paramount.

‘We treated this incident very seriously and trialled Wi-Fi free zones over a period of time but this was not sustainable.

‘From a teaching perspective as well as the many administrative functions of a school, the disruption caused by lack of wi-fi and wireless equipment outweighed the potential side effects that may be associated with it.

‘We would always follow government guidelines concerning the safety of our pupils and staff and wi-fi usage in schools.’