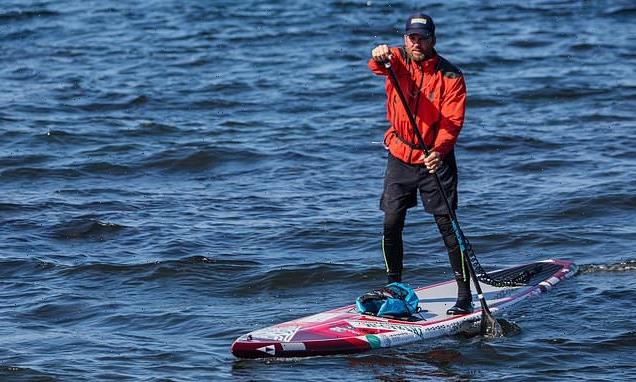 Brendon Prince, 48, arrived back in Torquay after he completed the 3,800-mile expedition on a stand-up board.

Speaking ahead of his arrival, Mr Prince, pictured, said: ‘It is a strange feeling that when I left Torquay I turned right and continued turning right and all of a sudden I am now coming back into Torquay.’ 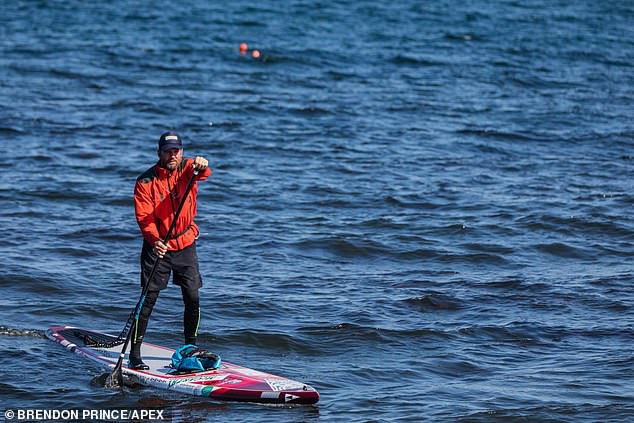 Brendon Prince, 48, arrived back in Torquay after he completed the 3,800-mile expedition on a stand-up board

The father of three was driven to take on the challenge after he tried to save three people who drowned at Mawgan Porth beach in Cornwall in 2014.

It inspired the off-duty lifeguard to set up the charity Above Water, which teaches children about water safety.

Mr Prince completed the last 25-mile (40km) leg of his challenge from Sidmouth, in Devon, to Torquay, where he was greeted by friends and family.

He was escorted back to the shoreline at Torre Abbey Sands on Torquay seafront by a flotilla of other paddle boarders and boats.

Money raised from the journey will go to seven charities and towards creating a sea safety app.

The shortest time he spent in the water was four hours a day, while the longest leg of his journey took 16 hours.

He added: ‘The North Sea was a challenge and crossing the Thames and going through massive ports like Dover and Portsmouth all kept me on my toes.

‘The same time it was difficult from a mental point of view – feeling that you are so close but the realisation you are still so far away.

‘When I got to Brighton I really started to feel like I was on the home strait and felt like “I’ve done this”. 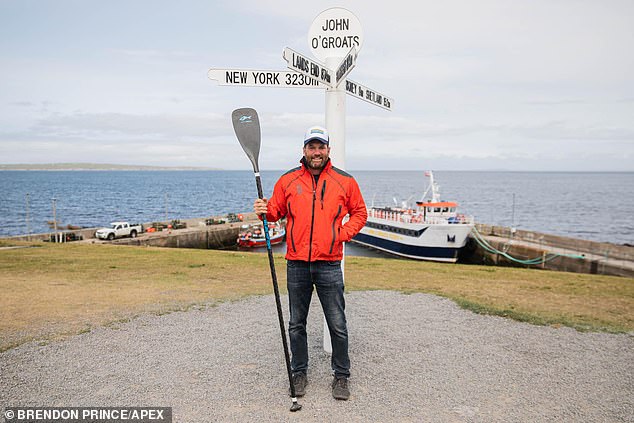 ‘The only way to handle it is to take it every paddle stroke at a day. I just thought about the next day and you can not think about the bigger picture. You have to do it in little chunks – otherwise it can swamp you.’

Out of the 141 days since he embarked on the challenge Mr Prince has spent just 22 days off the water due to unsafe conditions.

‘It tested the limit of anyone’s skill level and endurance, knowing you have to do an 88km paddle north of Scotland with nowhere to get out for a rest of be saved,’ he said.

‘That’s why it’s never been done before.

‘I am a different person now from when I set off – and definitely a better paddler. Preparation is everything when it comes to water safety and we have nailed that.

‘But if I knew what I know now I am not sure if I would do it again. It was best kept as a surprise.

‘But it is sometimes best not to know and get on with it.’