An off-duty FBI agent who allegedly shot someone accidentally after his gun flew from his holster as he was doing a back flip inside a Denver bar has been charged with second-degree assault.

Chase Bishop, 29, appeared in court Wednesday after turning himself in to Denver police on Tuesday on a second-degree assault charge. Jail records say Bishop posted a bond and was released.

Attorney David Goddard asked that Bishop be allowed to travel because he lives and works in Washington, DC. Prosecutors did not object.

A 32-second video obtained by a local TV station showed the agent in the middle of the dance floor at the Mile High Spirits bar at 12.45am on June 2.

With a circle of partygoers around him, Bishop did a back flip for the crowd. But, as he flipped, his gun flew out from the holster at the back of his pants. 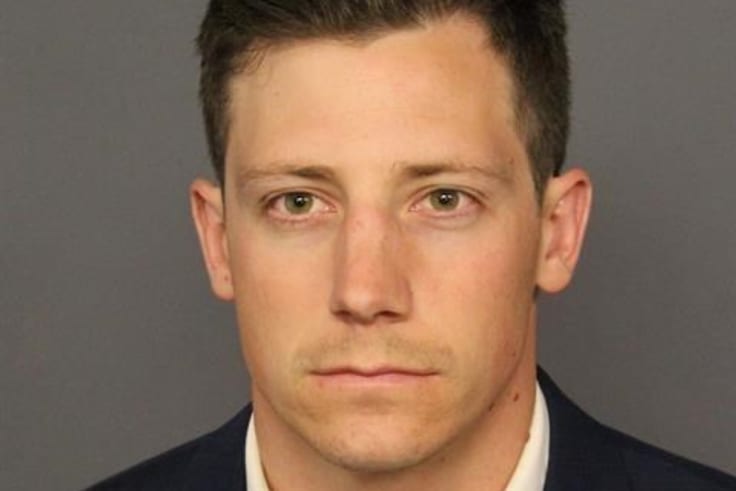 As he picked up the gun from the floor, it fired.

Additional charges may be filed depending on the blood alcohol content test results, which would not be available for another week, the district attorney's office said.

Authorities have not said what kind of gun the agent was carrying or why it accidentally fired.

Special Agent Amy Sanders, a spokeswoman for the FBI field office in Denver, declined to comment on Bishop's employment status with the agency.

"In order to preserve the integrity of the ongoing investigation, we are unable to comment regarding this matter," she said in statement. "The FBI will continue to fully cooperate with the Denver Police Department and the Denver District Attorney's Office as this matter proceeds through the judicial process."

The man who was shot, Tom Reddington, told Good Morning America last week that he and his friends were sitting at one of the tables when he heard "a loud bang" that he thought was a firecracker.

"Then I looked at my leg and see some brown residue… I'm still thinking it's a firework. All of a sudden, from the knee down my leg became completely red," Reddington, 24, said. "And that's when it clicked in my head, 'Oh, I've been shot'."

In a statement posted on Facebook two days after the incident, Mile High Spirits bar said one of its "innocent patrons was shot" because of the agent's "misconduct".

"It is shocking that the only shooting to ever occur at our establishment came about as a result of an FBI agent entering our distillery tasting room carrying a loaded firearm without our knowledge, in violation of our rules," the bar said. "We are deeply saddened by the events that occurred and look forward to speaking with representatives of the FBI, so we can come to understand his presence and his need to be armed in our establishment."