As the cars whooshed by me on a rainy Saturday night, I couldn’t help but think about the danger I was putting myself in to deliver Chinese takeaway by bicycle to a family on the other side of my inner western suburb.

Like me, thousands of men and women everyday put safety out of their minds, and begin their arduous journey via cycle to deliver food across the city for less than minimum wage. Five delivery riders have died nationally in the past three months, four of them in Sydney. 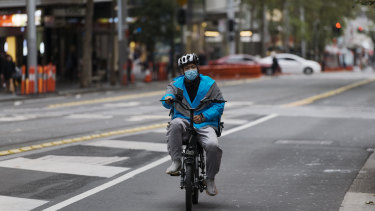 If a young rider were injured (or worse) on their way to your house, would you even know?Credit:James Brickwood

These often invisible people risk travelling on roads not made for bicycles, braving aggressive drivers to deliver food for both those opting for convenience, and those that cannot leave their homes for health and safety reasons. These delivery riders, like me, risk exposure to COVID-19, physical injury, and psychological stress for a few measly dollars.

Yet, in a gig economy where the race to the bottom is only compounded by the stress and economic precariousness of the health crisis, we take that risk, we work for starvation wages, because we have no other choice. Our journey is one, though seemingly necessary in our contemporary world, that proves another example of our society’s valuing of convenience over the safety of vulnerable workers.

The fact of the matter is, in many parts of our city, the road is not made for cyclists, and even if it is, cars have no interest in sharing the space with people on bikes. That said, the risk taken by delivery riders is compounded as delivery riders have to brave extreme and unpleasant weather during the most inconvenient and dangerous times to travel – we do not have the option to simply jump on a bus, or not go out. 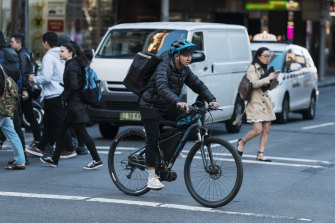 Food delivery drivers face many dangers in their job.Credit:James Brickwood

If the choice is between the risk of injury or worse, and not being able to feed one’s family, the decision is obvious. Moreover, riders have to maintain often impossible time targets to make sure that the food being delivered is received at the safe temperature, worsening an already risky and dangerous situation. For those not lucky enough to have access to the social safety net, this risk is about survival, a struggle as old as time, but one seemingly incongruent with a 21st-century social democracy.

It’s nice to think that we’ve advanced past a survival of the fittest, or a Hobbesian ‘state of war’ mentality, but as a car cuts in front of me and I brake just in time to avoid an accident, I can’t help but think that we’re far from the society we tell ourselves we are. We are OK with putting others at risk, if it means that our food is delivered to us hot, fresh, and quick; no one knows that better than those that deliver your food via bicycle.

Jade Harward is a food delivery rider in Melbourne.