Height of recklessness: Heart-in-mouth moment daredevil leaps off the roof of a moving train to plunge into river – and his only injury is a knocked-out tooth

A daredevil decided to propel himself from the roof of a speeding train and into a river below – remarkably escaping the dangerous stunt without any serious injuries.

Yaro Panchenko, 18, decided to ‘surf’ the subway train as it travelled through his hometown of Kiev, the capital of the Ukraine, on August 1.

Heart-stopping footage shows Yaro walking across the roof of the train carriage and balancing near the edge, preparing himself for the jump. 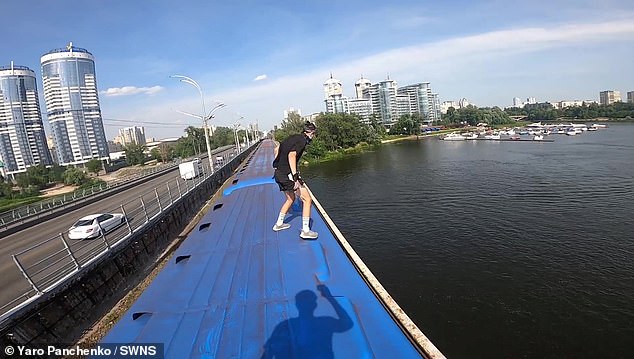 Yaro Panchenko, 18, decided to complete a dangerous trick and jump from the roof of a speeding train in Kiev and land in the Dnieper river below 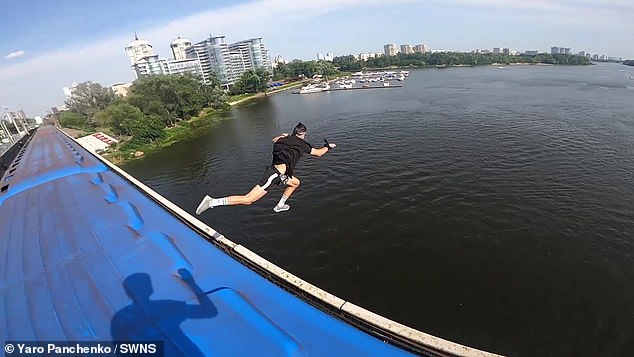 Terrifying footage shows the daredevil leap from the train after ‘surfing’ the subway car, accompanied by his friend

Yaro steps forward to attempt the dangerous trick, faltering for a second before he propels himself from the moving train.

The terrifying video shows Yaro disappear below the bridge before splashing into the river below.

But the jump does not go entirely to plan as Yaro’s GoPro camera hits him in the face on impact and knocks out one of his teeth.

Remarkably, the daredevil did not suffer any other major injuries during the treacherous stunt.

Yaro said: ‘The danger of this trick was that at the speed of the train and at a sufficiently high altitude, I could break my rib.

‘I managed to avoid these injuries but not everything was so smooth. 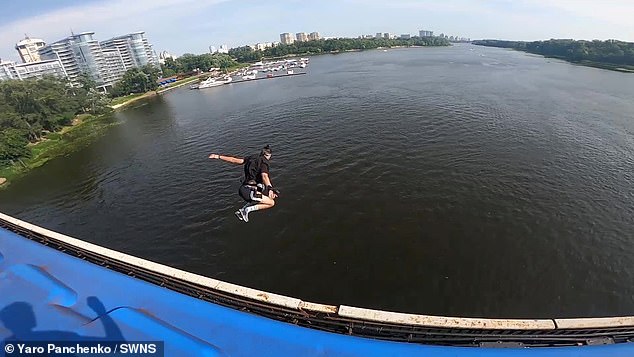 Yaro said the dangerous trick could have seen him break his ribs, due to the speed of the train and the high altitude on the bridge 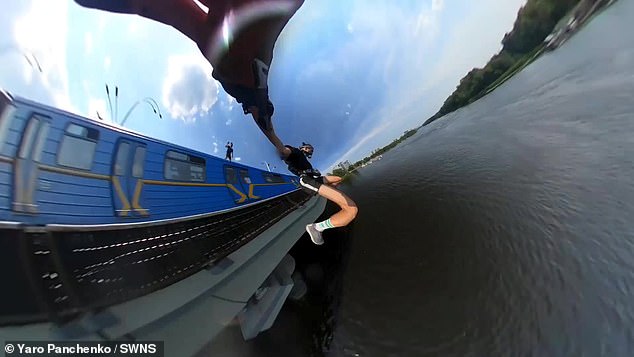 Yaro’s friend continued ‘surfing’ the train carriage after he made the heart-stopping jump, with Yaro remarkably escaping without any serious injuries 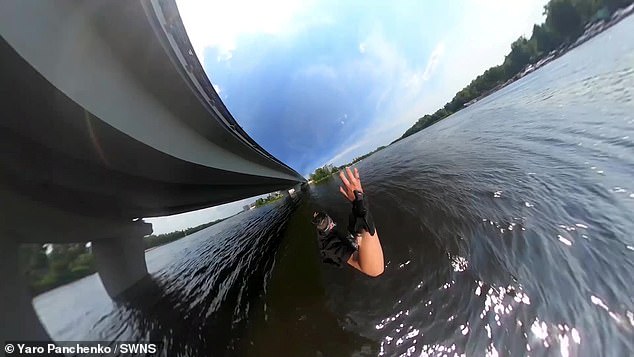 But the jump did not go entirely to plan as Yaro’s GoPro hit him in the face as he landed in the water, due to the impact from the jump

‘As I hit the surface of the water one of my GoPro cameras hit me hard in the teeth and knocked one out. I dropped the camera which sank to the bottom.

‘The feeling after the jump was bad, my back hurt terribly, but as I said earlier, there were no fractures.’

He was accompanied on the roof of the train by his friend, who continues ‘surfing’ the carriage after Yaro makes the brave jump.

Both Yaro and his friend took footage of the daredevil trick and Yaro also set up a camera on the bank of the river to capture the heart-in-mouth moment.