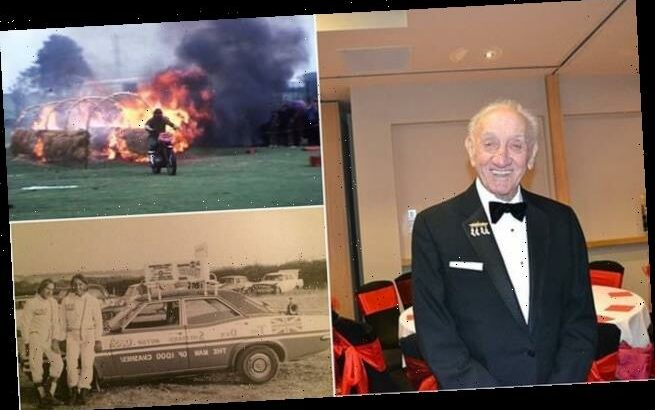 Daredevil stuntman Dick Sheppard who held 18 world records during his career and starred in 500 films including The Italian Job and James Bond, dies aged 90

A daredevil stuntman who starred in 500 films including the Italian Job, and held 18 world records during his career, has died aged 90.

Dick Sheppard, who once had more entries in the Guinness Book of Records than anyone else, famously boasted that he had wrecked 2,003 cars.

As well as the 1969 Michael Caine classic, he also starred in Bond films Thunderball and Diamonds Are Forever.

A three-times-married father-of-nine, who also had a stepdaughter, his death on Monday was announced by his family on his Facebook page today.

They said: ‘Fondly known by many for his obsession with cars and motorbikes he was truly a larger than life character who caught the public’s attention with his daredevil stunts and world records. 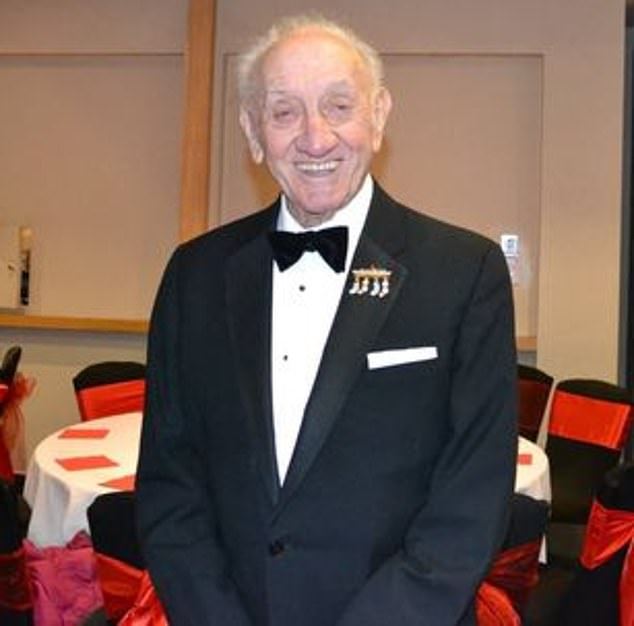 Dick Sheppard, who once had more entries in the Guinness Book of Records than anyone else, famously boasted that he had wrecked 2,003 cars 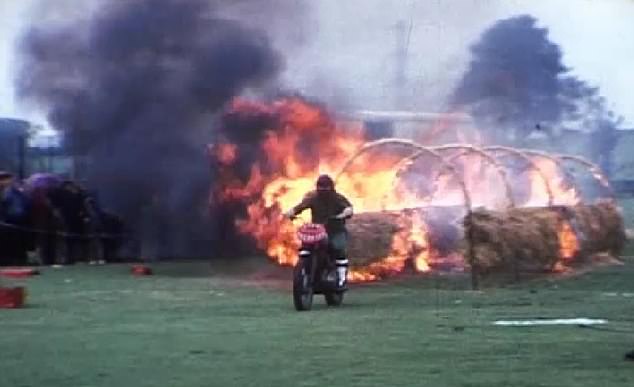 ‘His final wishes, however, were that we his family might grieve in private so we can reflect on his other roles as husband, father, grandfather and great grandfather.’

Dick, who was born and raised in Gloucester and lived in the city all his life, called himself ‘The World’s Most Prolific Stuntman – As documented by the Guinness Book Of Records.’

He did everything imaginable, and sometimes unimaginable, on wheels – and occasionally on horseback – and lived to tell the tale in an autobiography he published himself a few years ago – ‘Whirling Wheels and Dancing Hooves.’

He told how he went from his first motorcycle scramble as a 9 year old just after World War II to become a stunt man who featured in the Guinness Book of Records every year from 1969 to 1996. He finally retired from his daredevil career in 1993 after wrecking his 2,000th car at a show in South Africa.

Retirement did not keep him out of the limelight, however – he became a popular public speaker and every Christmas he turned his large detached home in Stroud road, Gloucester, into a winter fairyland with numerous moving Santas, reindeers and other festive characters as well as thousands of lights. 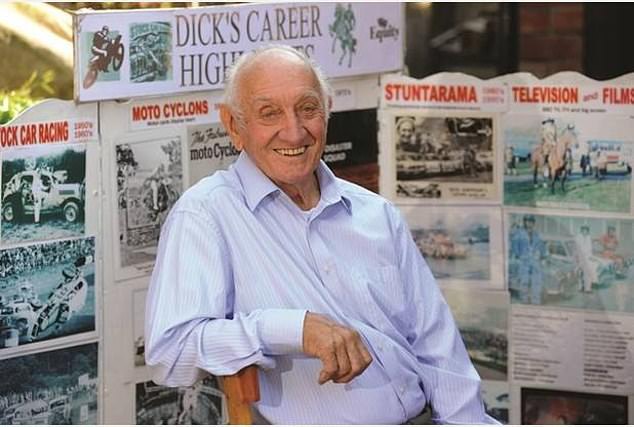 Dick, who was born and raised in Gloucester and lived in the city all his life, called himself ‘The World’s Most Prolific Stuntman – As documented by the Guinness Book Of Records’ 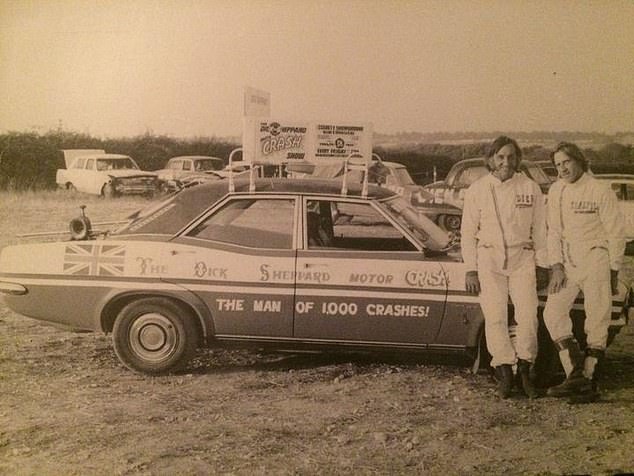 A three-times-married father-of-nine, who also had a stepdaughter, his death on Monday was announced by his family on his Facebook page today

Dick’s first world record – one of his favourites – was in 1969 when he rode an ex-army motorbike through a 100 foot tunnel of fire.

He regarded it is a record that will never be beaten because after four people had died trying it was withdrawn from the Guinness Book of Records.

He often commented that he had appeared in the Guinness Book more than anyone else… ‘even the editor!’

His most treasured possessions, he said, were 766 ignition keys from cars he had written off with his dramatic stunts.

‘I’ve wrecked more cars than you could fit into all the car parks in the middle of Gloucester,’ he would say. 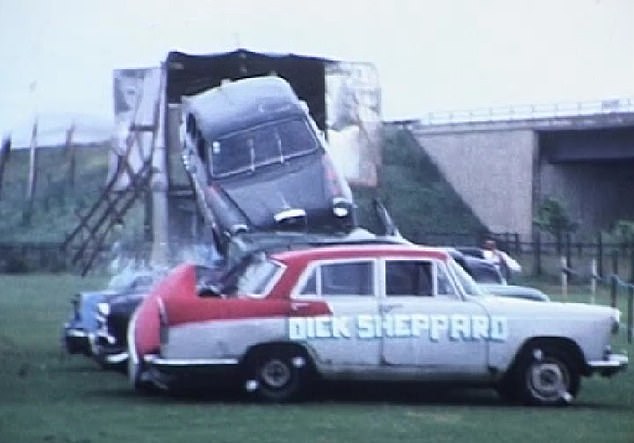 He famously said: ‘I’ve wrecked more cars than you could fit into all the car parks in the middle of Gloucester’ 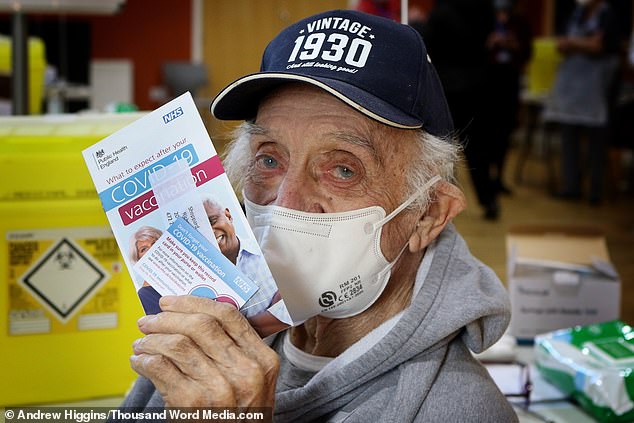 Dick attended Calton Road Junior School in Gloucester and passed the eleven plus exam to go to the Crypt grammar school.

‘I loved PE, especially when we played ‘British Bulldogs,’ where I excelled,’ he later recalled. ‘I also liked any lesson that contained interesting facts.

‘I even enjoyed maths because the teacher was unable to visualize anything beyond two dimensions, so in Geometry whenever a three dimensional figure needed to be demonstrated he got me to draw it on the blackboard, giving me a moment of temporary superiority over the teacher.

‘I found RE quite confusing. Over the years I think that Professor Brian Cox’s explanation of creation much more plausible than the one that I was taught from the Bible. ‘

His academic success at Crypt earned him a place at Cambridge University but he opted not to go and took a job in a motorcycle shop instead.

‘At school I was caned quite frequently and threatened with expulsion more than once for being a rebel,’ he once said. ‘I accepted that because it was usually quite true!

‘In contradiction to the punishment the few masters who owned cars used to hand me the keys during the morning so that I spent the lunch hour cleaning the plugs and points and generally tuning their cars at the out of bounds area in front of the school, while my pals played football in the playground.

‘This I did more for the love of engines than any fondness I felt for the teachers! The happiness this gave me continued throughout my life whenever I got the maximum performance out of an engine, whether it was to win a Stock Car Race or achieve a new World Record.’

He said he regarded his greatest achievements as being top points winner in Stock Car Racing for four consecutive seasons, his numerous world records, and writing a successful book about his exploits,

Talking about his Christmas transformation of his Gloucester home in later years, he said he got the idea from a holiday house he bought in America in 1989.

‘I was inspired by the way that Americans decorated their houses at Christmas. I decided to do the same at my house in Gloucester. I was not content with just sticking flashing lights up; the showman in me made me realise that people liked to see something move, so I added a Victorian fairground with its roundabout, Ferris wheel and swing boat.

‘I also had a train running round the lawn and a cable car carrying dolls up to a mountain. There was even a snowstorm every hour to enhance the North Pole scene with its polar bears and animated Eskimos.

‘Over fifteen years the display raised more than £40,000 for charity, but it had to stop because Tony Blair introduced a law that all electrical extensions had to be tested and certified as safe by a qualified electrician.

‘I was already paying the electric bill that the display consumed and this extra expense made it totally impractical, especially the £5000 fine for not complying! So regrettably I cut it all up, but I should have realised that, just like most of his other laws, he did not put in place the means of enforcing it.

‘I should have carried on exactly as I was just like most other people are and would probably have got away with it.’

Not surprisingly Dick rated his favourite film The Italian Job, in which he was a car stunt driver.

‘My favourite film of all time has got to be The Italian Job,’ he said.

‘It contains all the ingredients for a night of escapism at the cinema. It was a very low budget movie, but it was great fun to make, and it must be heading for the record of the most repeated film on TV.’

Asked when he was 84 if he had any remaining ambitions, Dick’s reply was: ‘There are 196 countries in the world. I have worked in 35 of them and visited another 16, but that still means there are 145 that I have never been to. With the increase in airfares and the decreasing value of my savings I think that my only hope is to buy a boat!’

Dick’s most recent public appearance was on December 21 when he went to Gloucestershire Royal Hospital to get a Covid vaccination and was heralded on the Gloucestershire NHS Facebook page.

‘The jab was easy peasy for retired Hollywood movie stuntman Dick Sheppard, 90, from Gloucester,’ the post said. ‘After getting the jab, he said ‘It’s taken a lot of organising, they’ve done very well. It was just a little prick that’s all, I’ve been excited to get it, but I’m needle-phobic!’

‘Of course we asked Dick to tell us a bit more about his stunt work. He told us he’s worked on over 500 films including The Italian Job, Thunderball and Diamonds Are Forever. He also holds 18 Guinness World Records including ‘The World’s Most Prolific Auto Stuntman.’ We’re very impressed!’

Dick is survived by his children and his third wife Phoebe.