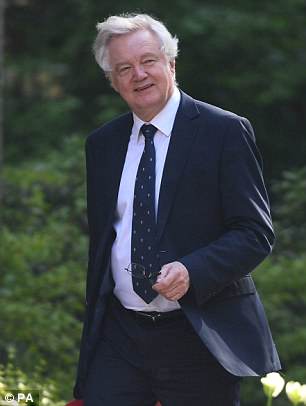 Controversial plans for a new ‘customs partnership’ with the EU looked set to be sidelined last night after Theresa May asked David Davis to find an alternative.

The Brexit Secretary is to lead a new Cabinet group designed to break the deadlock over future customs arrangements with the EU.

He will work with Business Secretary Greg Clark and Northern Ireland Secretary Karen Bradley to develop an alternative to the customs partnership idea, which is opposed by Eurosceptics.

The trio will develop the Government’s alternative plan – known as ‘maximum facilitation’ – which focuses on using technology to streamline customs checks. The decision follows talks between the Prime Minister, Mr Davis and other senior ministers in Downing Street yesterday.

Another group, involving Environment Secretary Michael Gove, International Trade Secretary Liam Fox and Mrs May’s deputy, David Lidington, has been asked to see if it is possible to revive the customs partnership idea in a way that would not threaten Britain’s ability to develop an independent trade policy.

While both options remain alive, insiders believe the decision to appoint Mr Davis to lead work on finding an alternative suggests support for the customs partnership idea is slipping away.

The two groups will provide an update to a meeting of Mrs May’s Brexit ‘war cabinet’ on Tuesday, although a final decision could be postponed until later this month.

The customs partnership had been Mrs May’s preferred option. But critics claimed it would be ‘unworkable’ and could lead to the UK remaining in the EU customs union in all but name. A senior government source said last night that Mrs May was now not wedded to either option and was ‘interested in what works’. The customs partnership plan, backed by her chief Brexit adviser, Oliver Robbins, would involve the UK continuing to collect EU import tariffs at the border and passing them to the EU. Regulations would also have to be aligned to a significant extent.

Its supporters believe it would resolve the Northern Ireland border issue and minimise disruption for business.

The Brexit ‘war cabinet’ blocked the customs partnership at a crunch meeting last week. But some senior figures, including Mr Clark, have continued to push it.

Theresa May has extended her party’s lead over Jeremy Corbyn to five points, according to a poll.

The Conservatives are up one point to 43 per cent, while Labour remains on 38 per cent, the YouGov analysis found.

It is the fourth poll in a row showing a four or five-point Tory lead over Labour.

The surge in Tory support comes after Labour’s anti-Semitism crisis and Mr Corbyn’s badly-received interventions on the Russian attack in Salisbury. About 39 per cent would choose Mrs May as best prime minister, up two points, while 25 per cent pick Mr Corbyn, down two points. YouGov interviewed 1,648 adults on Tuesday and Wednesday for the Times. The Lib Dems were up 2 per cent at 9 per cent.

It came as former Labour home secretary Alan Johnson said the party could spend a further 18 years out of office and called for more moderate socialism. He branded Momentum a ‘fan club for the leader’ and said: ‘I think it will all end in tears.’

He will now be asked to work with Mr Davis to address his concerns that even streamlined customs checks could cost jobs in sectors such as the car industry, where parts criss-cross the Channel multiple times.

Miss Bradley will be asked to find a way to make the ‘maximum facilitation’ option compatible with the Government’s pledge to avoid the introduction of a hard border on the island of Ireland.

The central role for Mr Davis reflects fears in government that he could quit if the customs partnership idea is pushed through.

One Whitehall source said: ‘Obviously she is ultimately the boss and will have the final say. But there is a recognition that if she pursued a policy that meant losing her Brexit Secretary then that would be pretty existential for her.’

Meanwhile, ministers were yesterday accused of delaying vital Brexit legislation after Commons Leader Andrea Leadsom confirmed the EU Withdrawal Bill would not be brought back to the Commons in the next fortnight.

Ministers face a challenge in overturning 14 amendments imposed by pro-Remain peers in the Lords, including measures to keep Britain in the EU single market.