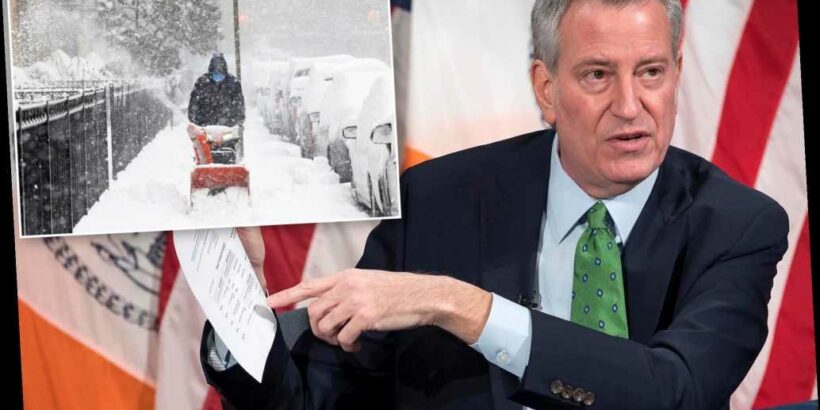 NYC issues state of emergency ahead of brutal winter storm

Mayor Bill de Blasio warned New Yorkers of “blinding snow” falling at a rate of two to four inches of per hour and Gov. Andrew Cuomo cautioned that above-ground subway service could be suspended — as a powerful winter storm pelted the Big Apple Monday.

“Stay off the roads, stay off the streets and sidewalks, stay inside,” de Blasio pleaded during a City Hall press briefing, as he explained that “at the most intense points” of the storm “you’re going to see two to four inches per hour.”

“That’s blinding snow,” Hizzoner said, adding, that he is “fearful” of the situation getting “worse.”

“There will not be in-person schools tomorrow,” de Blasio. “Wednesday we will be back strong.”

Coronavirus vaccination appointments scheduled for Tuesday have also been postponed because of the storm, said de Blasio, who previously announced that jabs for Monday would be delayed too.

Meanwhile, Cuomo, speaking on WCBS 880 Radio earlier Monday, said that the snow plows out on the streets “can’t keep up” with the rate of snowfall.

“If the volume is anything like they’re talking about…we’re going to see a very serious situation,” the governor said.

Cuomo warned that above-ground service on the MTA’s subway system could close due to the storm.

New York City could see as much as 16 to 22 inches of snow, forecaster show.

A state of emergency has been declared in New York City, Long Island and the state’s northern suburbs.