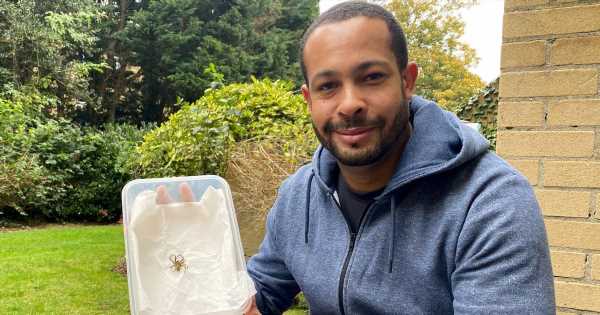 A taxi driver thinks he found the world's most venomous spider inside his supermarket bananas.

Joe Stein, 37, opened his bag of bananas and claims that he discovered a 2 inch "dark mass" hanging from the fruit.

And terrifyingly, it began to twitch.

Panicking, he threw it into a bin outside, but quickly changed his mind, retrieved it, and looked up the hairy specimen online – only to discover it appeared to be a Brazilian wandering spider.

Brazilian wandering spiders belong to the genus Phoneutria – which means "murderess" in Greek.

Mr Stein, from Beckenham, southeast London, said: "I sort of had to refocus my eyes so I could see his big bony, hairy legs.

"It was a bit shocking!

"Obviously I was shocked, my girlfriend was a bit shocked, finding out it was a venomous spider if alive.

"Luckily I think it was dead, but it was enough to make us both jump and feel on edge.

"I want to make people aware and to be careful."

The bananas he bought were purchased from a local Sainsbury's branch but originate from Colombia.

"I emptied the whole bag into a plastic box, and as soon as it fell out I put a lid on it and I could tell it wasn’t moving," he recalled.

"We Googled it and it looks 99% like the wandering spider."

The nickname for this spider is actually the banana spider, so the thought process that it is the most poisonous spider in the world could hold some truth.

Their venom is toxic to the nervous system, causing symptoms such as salivation and an irregular heartbeat.

The venom can also be known to cause a long, painful erection in human males.

Stepdad-of-one Mr Stein said: "I saw a few pictures, it looked identical; the big hairy legs, the big abdomen with the little humps coming out and a black line.

"I was a bit shocked to find out it's one of the most venomous and dangerous spiders in the world."

A Sainsbury’s spokesman said: "We’re in touch with the customer to apologise for their experience.

"Incidents like this are extremely rare and we have processes in place to prevent them."

Get all the latest news straight to your inbox. Sign up for the free Daily Star newsletter here