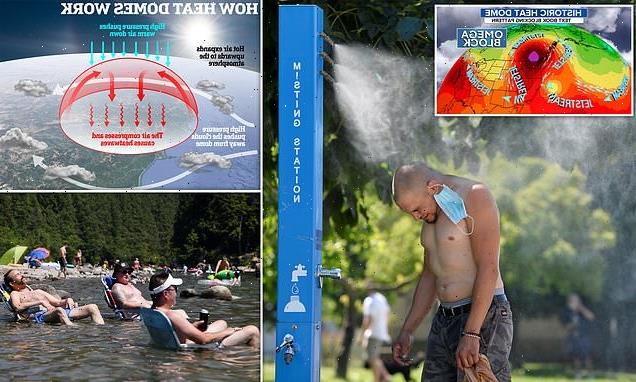 A blistering heatwave in Canada has caused dozens of deaths amid sweltering record temperatures after a high-pressure heat dome settled over the west of the country.

More than 230 deaths have been reported since Friday in British Columbia amid the ‘unprecedented’ weather which has led to ‘disastrous consequences’ for hundreds of families, the region’s premier John Horgan said.

The country’s temperature records have now been broken for three days in a row, with the latest soaring to 121F in Lytton on Tuesday. Before Sunday, temperatures had never surpassed 113F in Canada with the last record set in 1937.

Authorities say there has been a huge spike in deaths, many related to the extreme weather conditions, with 65 unexpected deaths linked to the heat in Vancouver alone since Friday.

The coroner’s service in British Columbia normally expects to see around 130 deaths in four days, but the figure has risen to 233 between Friday and Monday.

The chief coroner said he expects the numbers to rise as the figures are updated, with many of the fatalities among elderly people or those with underlying health conditions with heat an underlying factor.

The ‘once in a millennium’ event is being caused by a heat dome, which means the warmth extends high into the atmosphere and impacts pressure and wind patterns.

A mountain of hot air is trapped by high-pressure conditions, further heating its and compressing it like a lid and wedging the high pressure between areas of low pressure, pushing cooler air away. 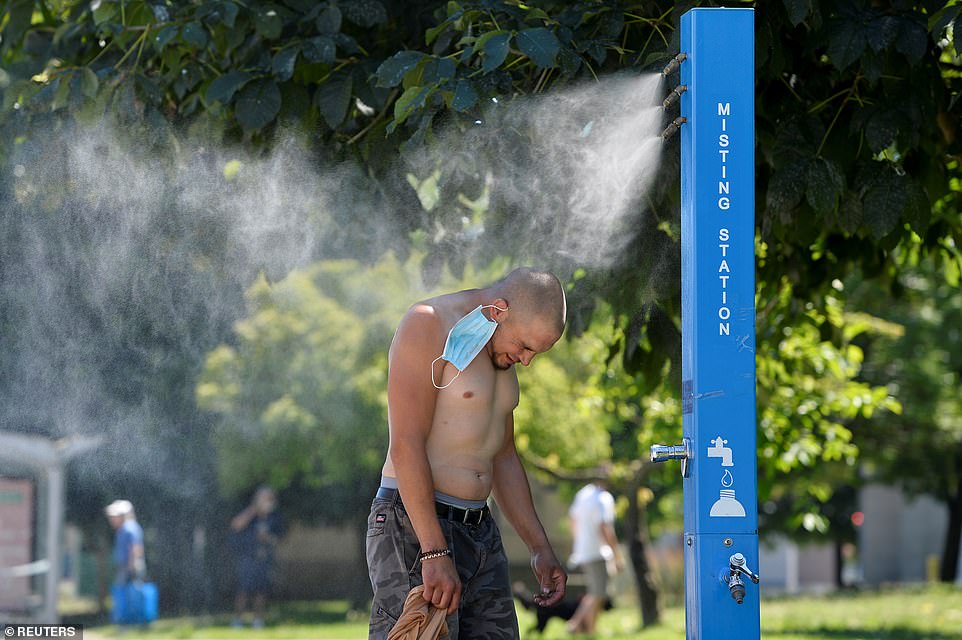 A man cools off at a misting station during the scorching weather during a record heatwave in Vancouver, British Columbia 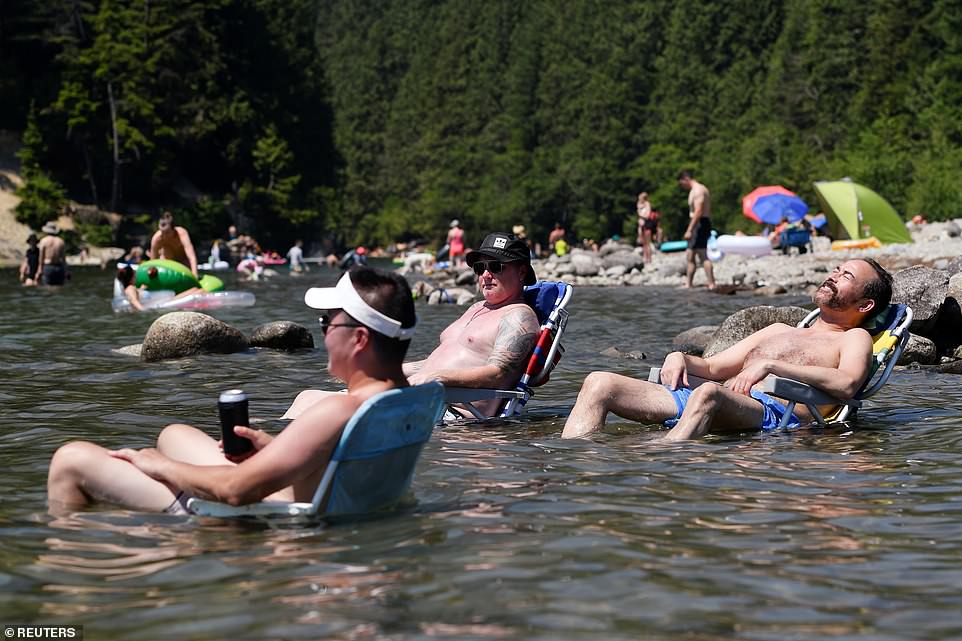 Beachgoers sit in the water at Alouette Lake to cool off in Maple Ridge, British Columbia, as Canada experiences its highest ever temperatures 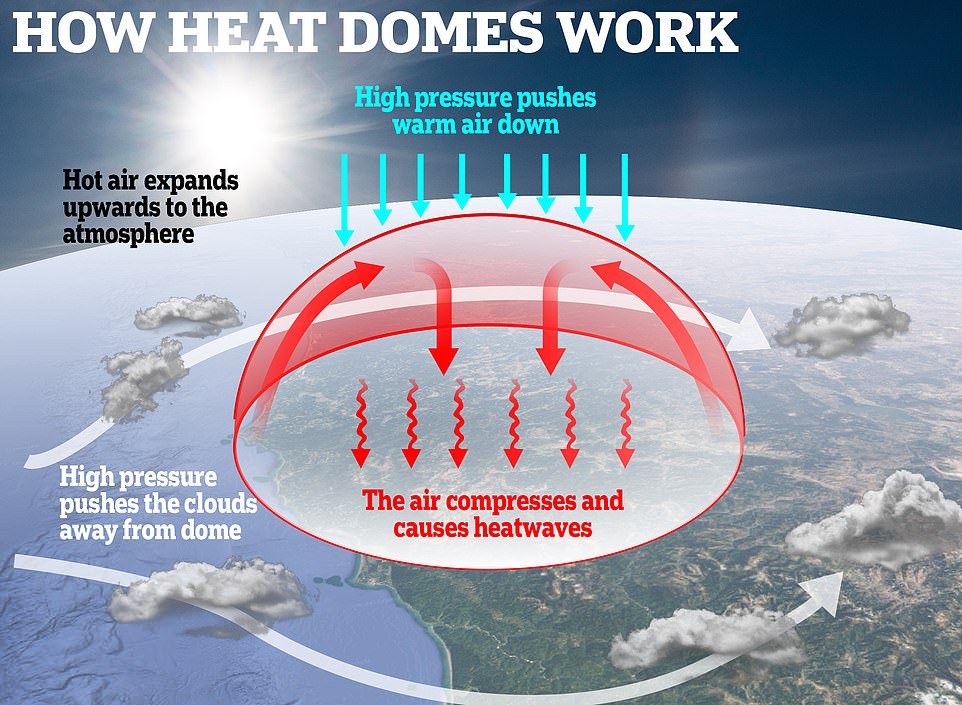 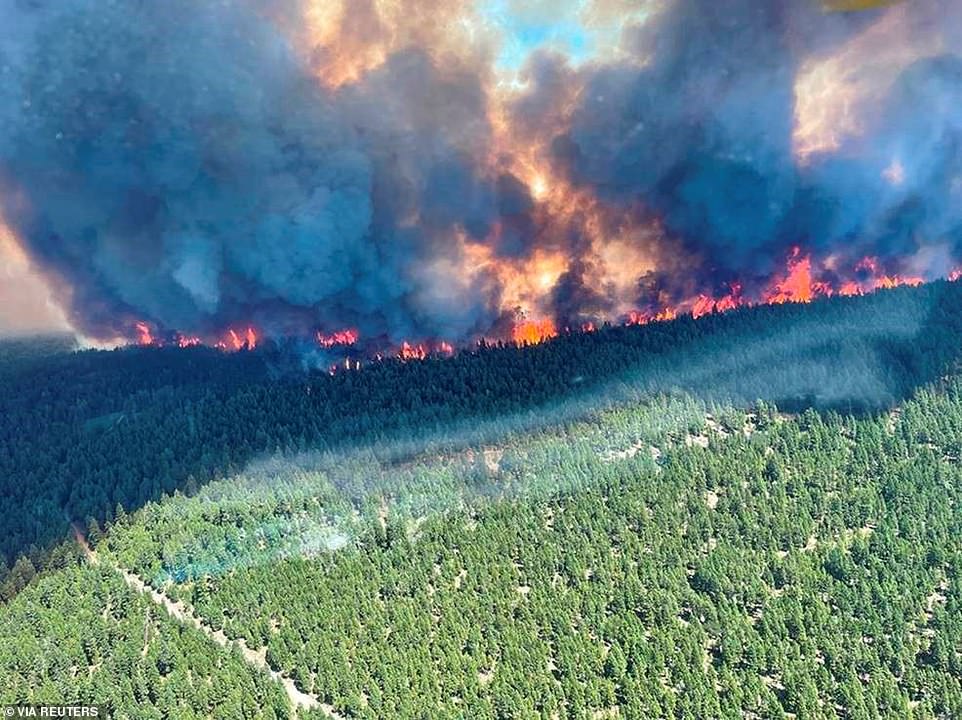 Smoke and flames are seen during the Sparks Lake wildfire at Thompson-Nicola Regional District, British Columbia, amid the extreme weather 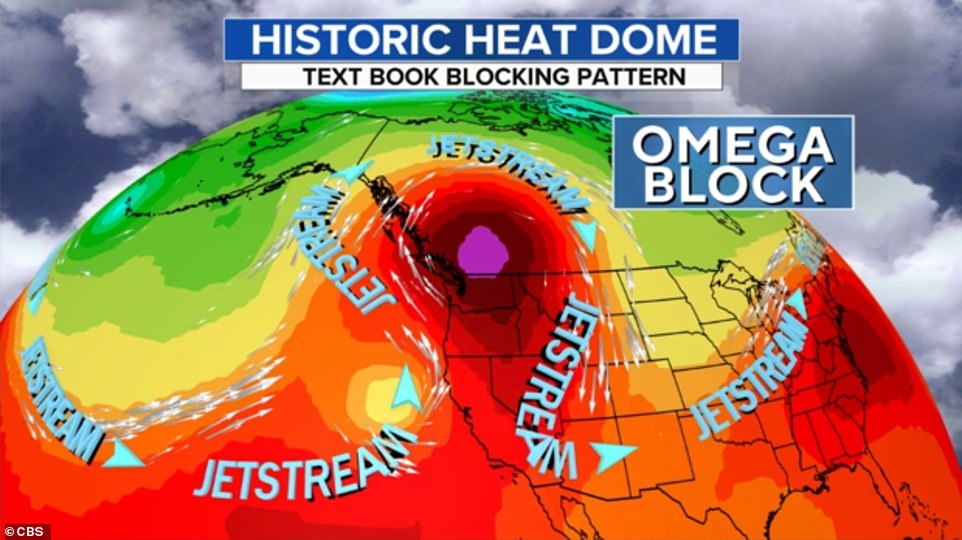 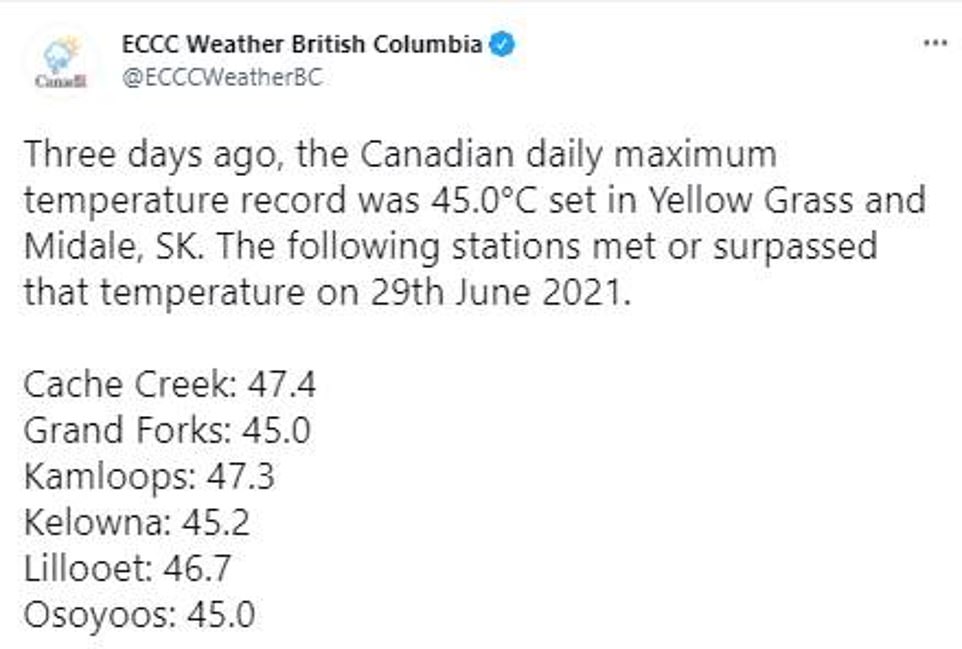 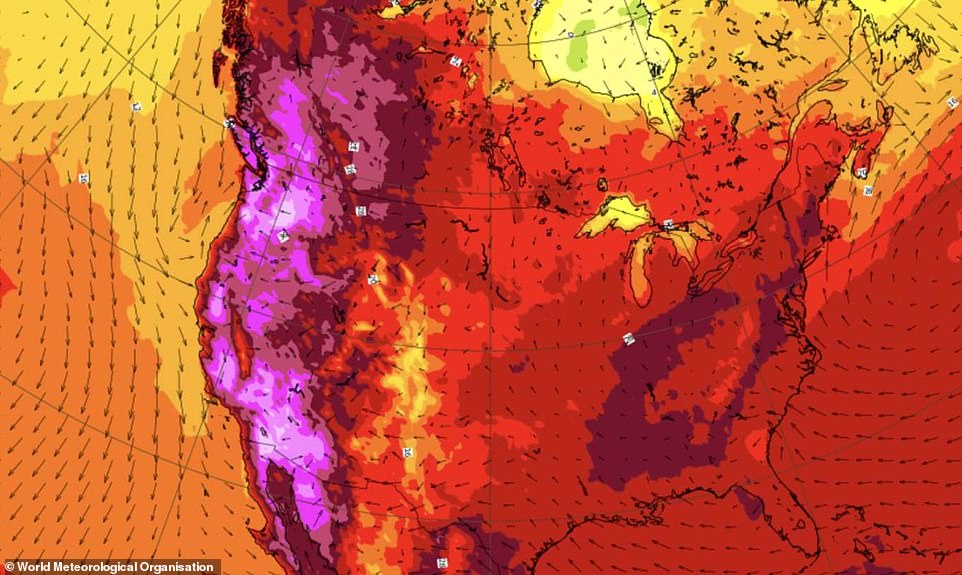 The temperature in Lytton, which is about 155 miles east of Vancouver, reached 121 on Tuesday, according to the country’s weather service

Cpl. Mike Kalanj of Burnaby Royal Canadian Mounted Police said the detachment responded to 25 sudden-death calls in a 24-hour period starting Monday. The deaths are still under investigation and many of the deceased were seniors, he said. 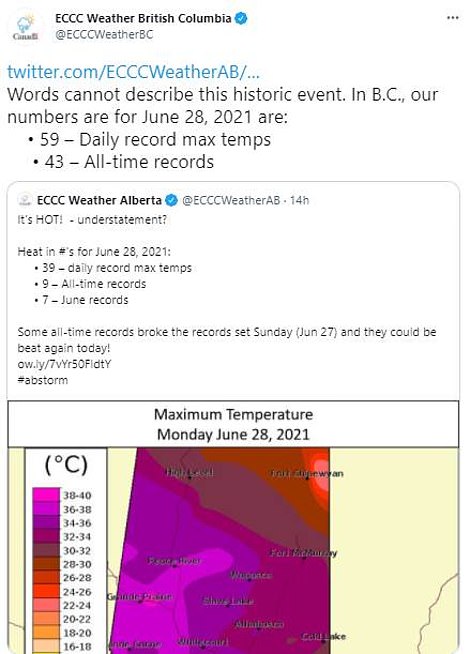 The record-breaking heat wave could ease over parts of British Columbia, Yukon and the Northwest Territories by Wednesday, but any reprieve for the Prairie provinces is further off.

In Vancouver, the police department said it had redeployed dozens of officers and asked the public to call 911 only for emergencies because heat-related deaths had depleted front-line resources and delayed response times.

‘Vancouver has never experienced heat like this, and sadly dozens of people are dying because of it,’ Sgt. Steve Addison said in a news release. ‘Our officers are stretched thin, but we’re still doing everything we can to keep people safe.’

As of mid-afternoon Tuesday, he said, police had responded to more than 65 sudden deaths since the heat wave began Friday.

‘The vast majority of these cases are related to the heat,’ Addison said, adding that on a typical day, Vancouver police respond to between three and four sudden-death calls.

Ingrid Jarrett, CEO of the British Columbia Hotel Association, said residents in parts of the Lower Mainland, Victoria and the Okanagan region have been booking air-conditioned rooms so they can continue working and also get some sleep.

The Royal Canadian Mounted Police told the outlet that many of those who have died have been senior citizens. 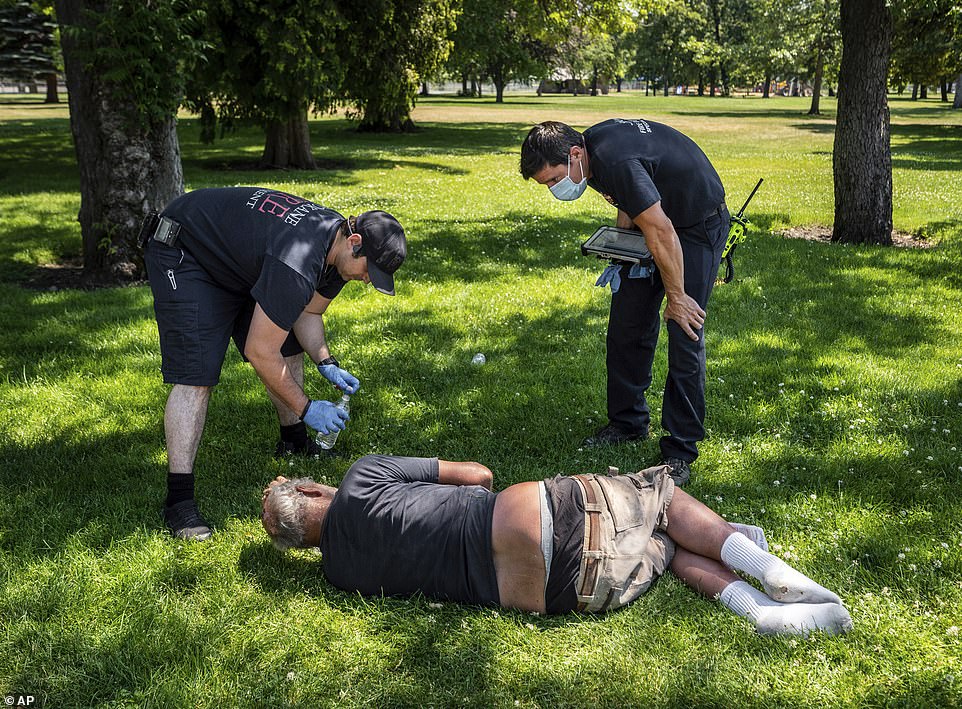 SPOKANE, WASHINGTON: Firefighter Sean Condon, left, and Lt. Gabe Mills check on the welfare of a man in Mission Park as temperature reach over 100 degrees on Tuesday 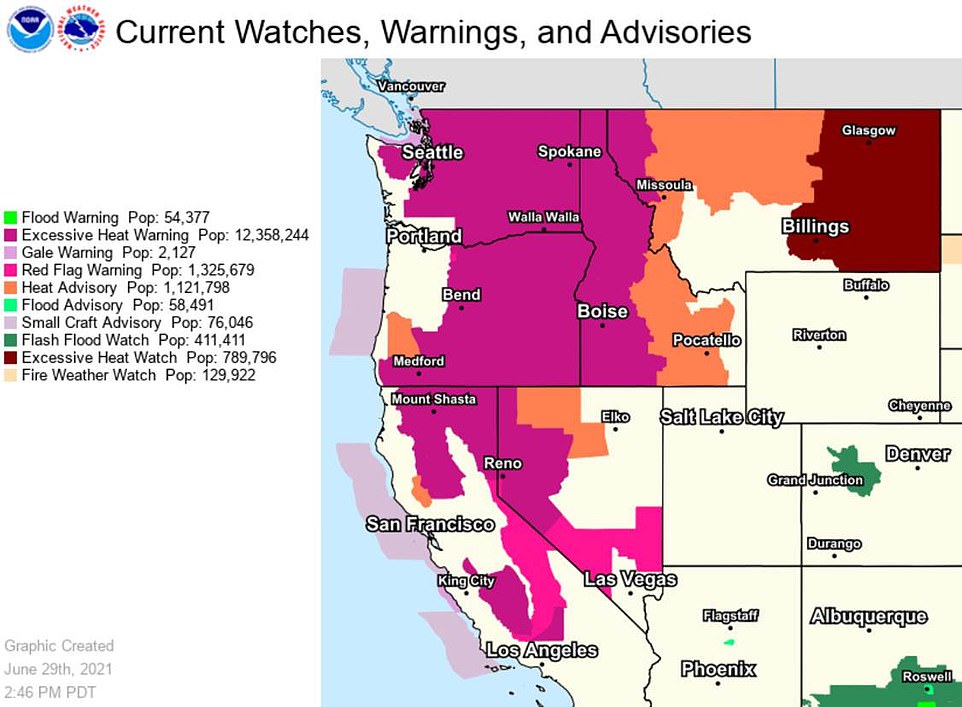 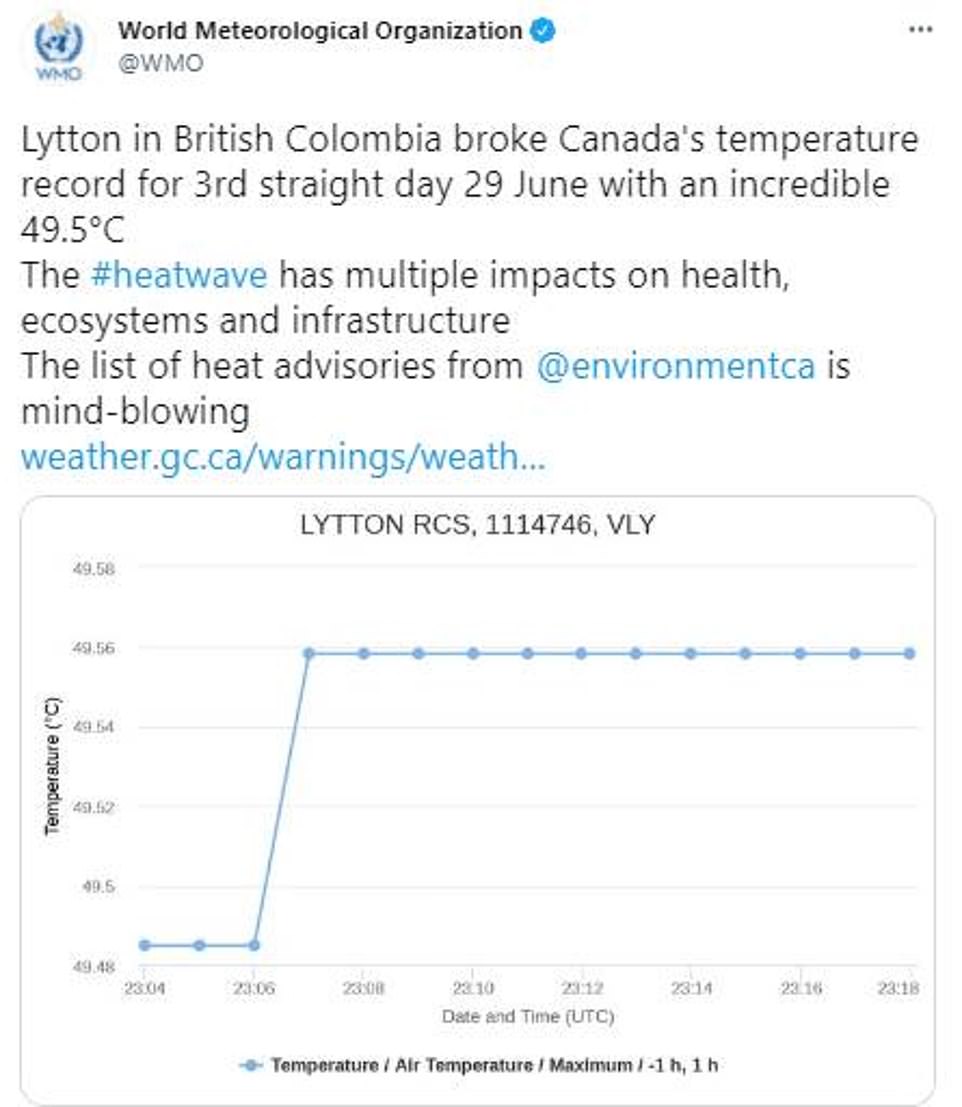 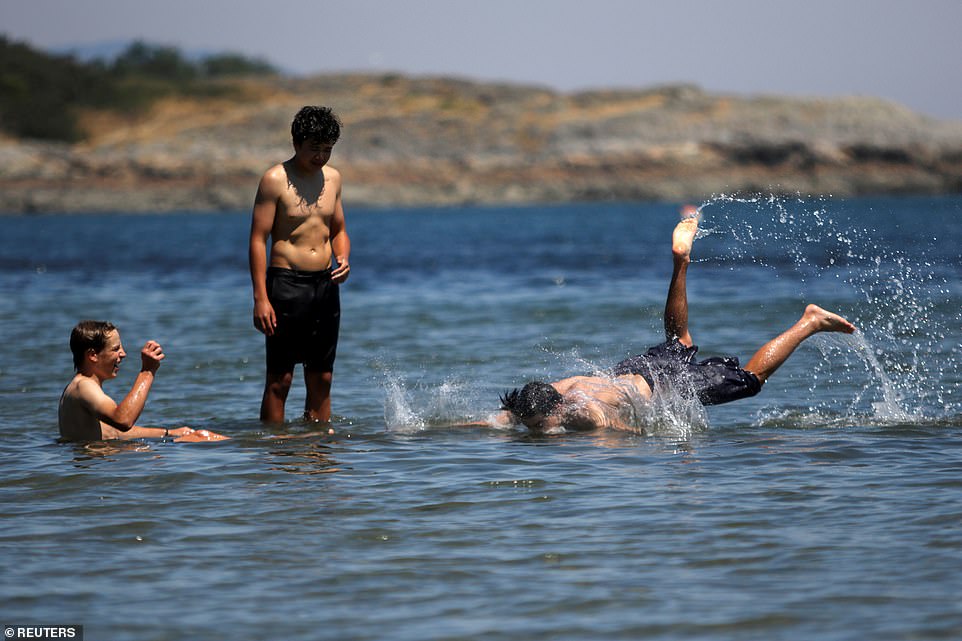 In Vancouver, the police department said it had redeployed dozens of officers and asked the public to call 911 only for emergencies

‘How we get through this extraordinary time is by hanging together,’ he said.

He urged ‘checking up on those people we know might be at risk, making sure we have cold compresses in the fridge or we’re staying in the coolest part of our homes, and making sure that we’re taking steps to get through this heat wave.’

On Monday, temperatures in Lytton, British Columbia reached 117.5 degrees marking the hottest temperature ever recorded in Canada. That temperature was around 48 degrees above what’s normal for Canada in late June.

The temperature in Lytton, which is about 155 miles east of Vancouver, reached 121 on Tuesday, according to the country’s weather service, Environment Canada. 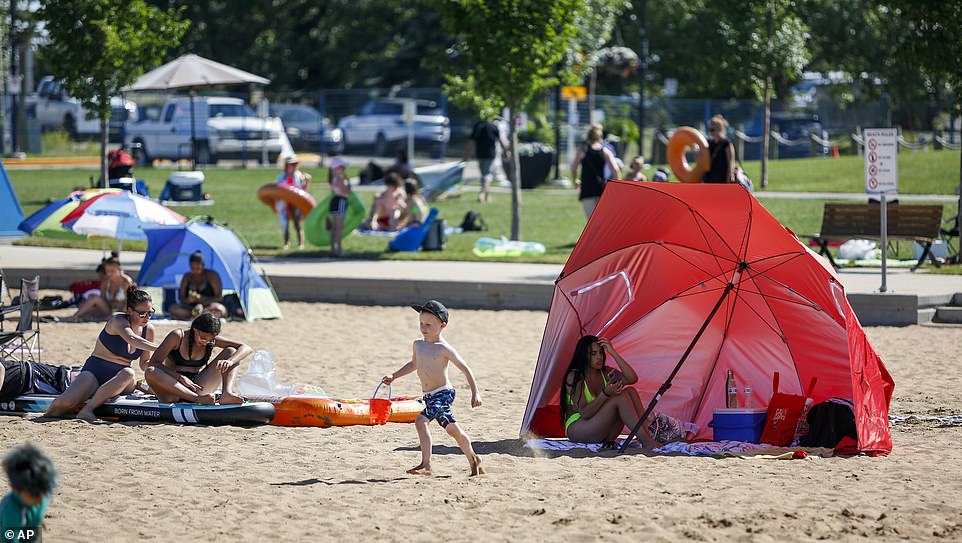 CHESTERMERE, ALBERTA: People are seen trying to beat the heat with umbrellas and tents 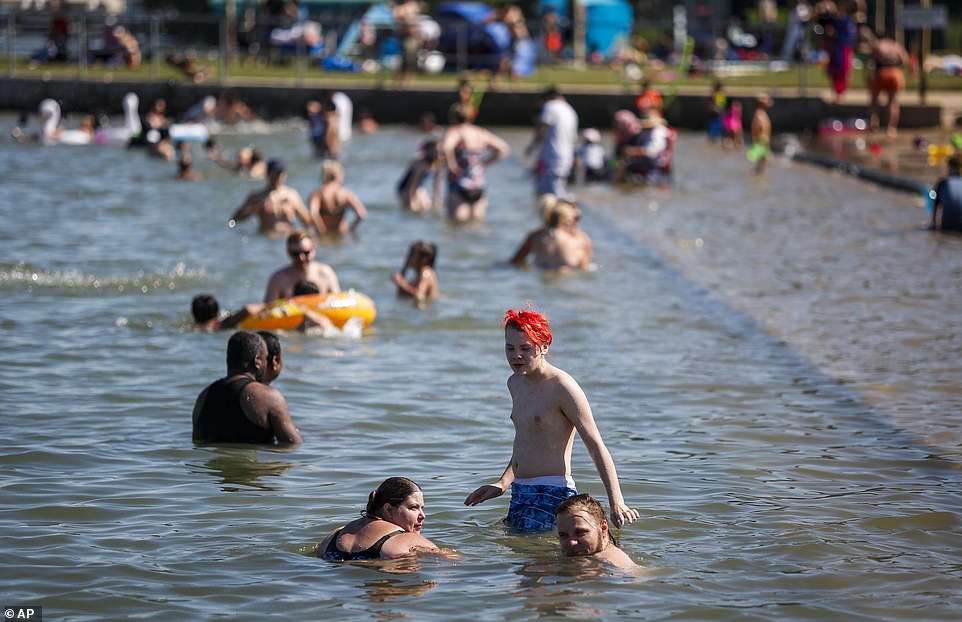 CHESTERMERE, ALBERTA: People try to beat the heat at a beach on Tuesday 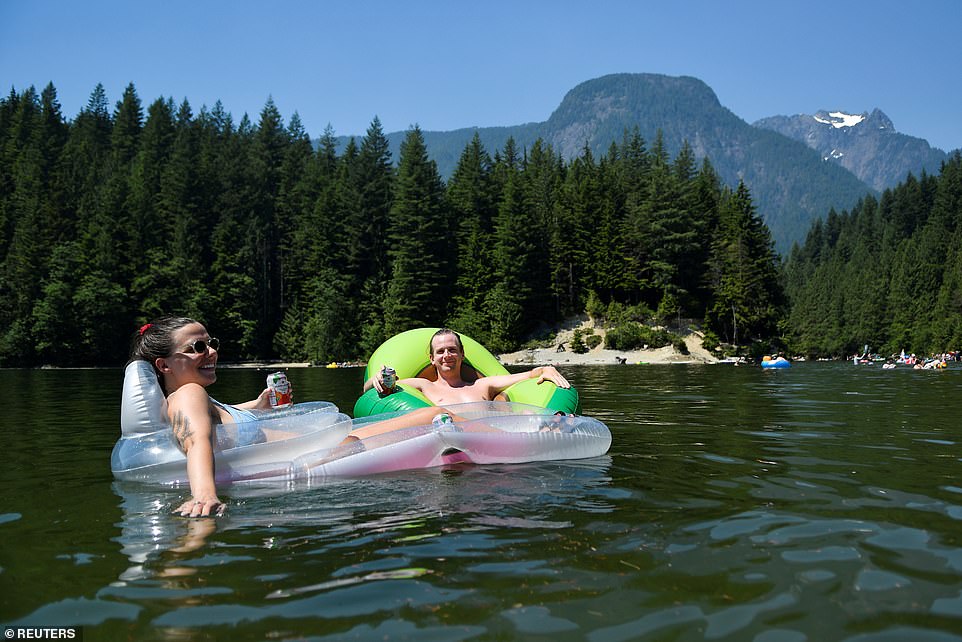 MAPLE RIDGE, BRITISH COLUMBIA: People headed to Alouette Lake to cool off during the scorching weather of a heatwave 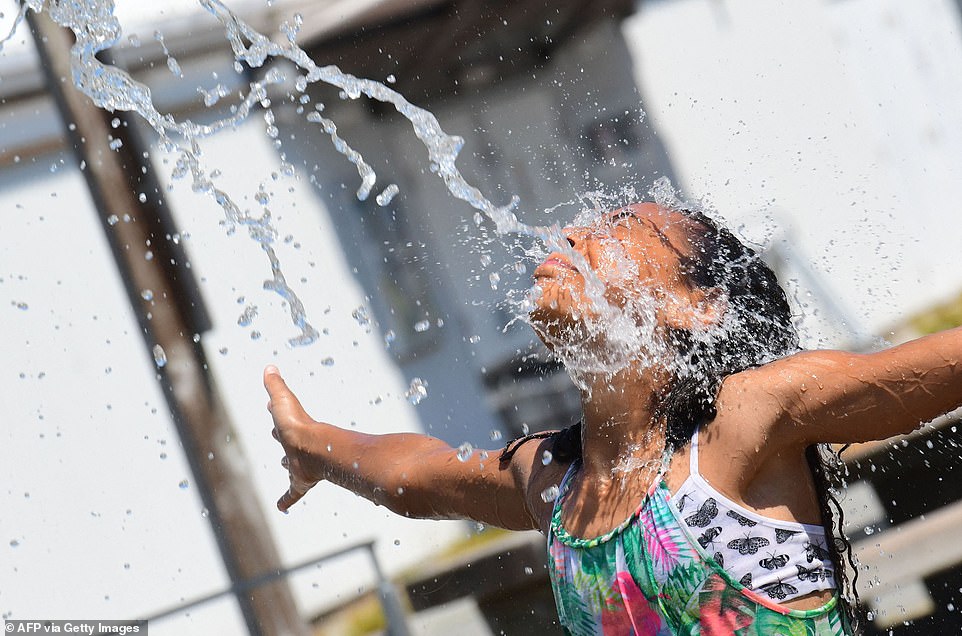 Kids cool off at a community water park on a scorching hot day in Richmond, British Columbia on Tuesday 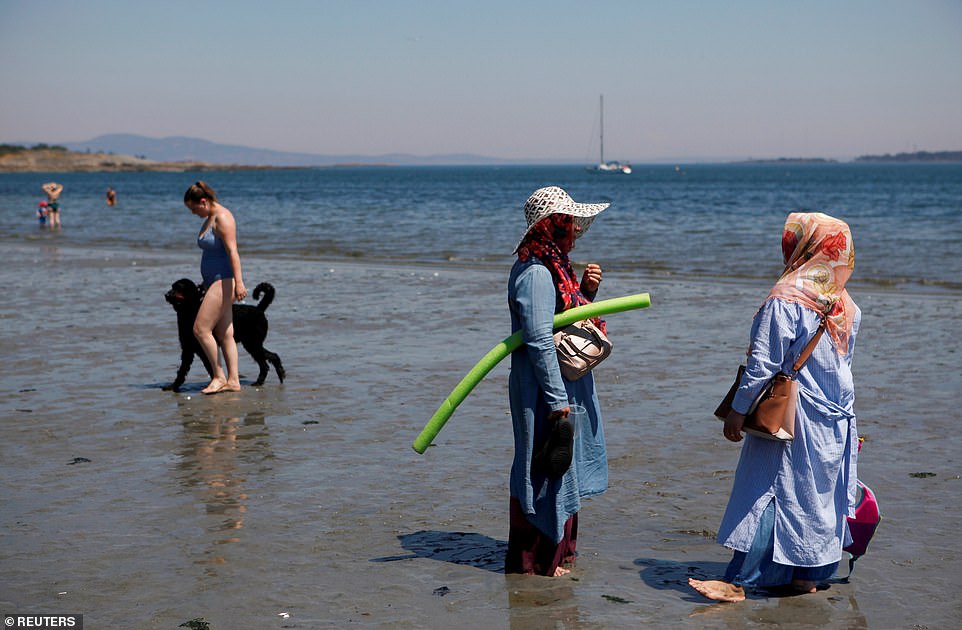 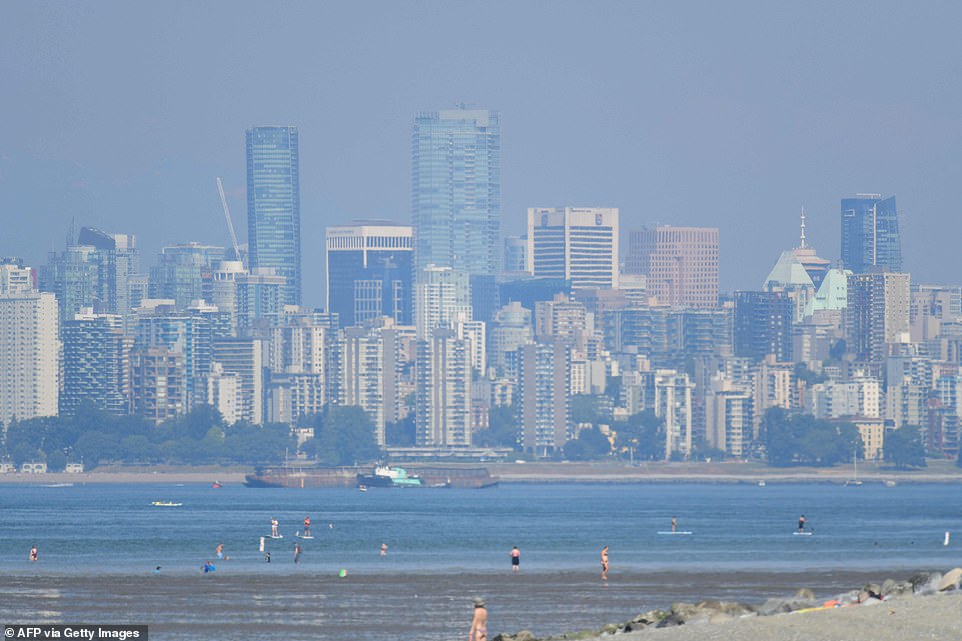 The city of Vancouver, British Columbia, is seen through a haze on a scorching hot day on Tuesday as records were broken again

According to CNN, temperature readings in downtown Vancouver were 98.6 degrees on Saturday, 99.5 on Sunday and 101.5 on Monday.

‘Vancouver has never experienced heat like this, and sadly dozens of people are dying because of it,’ police sergeant Steve Addison said.

Other local municipalities in Canada have said they too have responded to many sudden death calls, but have yet to release tolls.

Some Vancouver locals said they had never experienced such temperatures before.

‘It’s never this bad. I’ve never seen anything like this,’ said a Vancouver resident who only gave her name as Rosa.

‘I hope it never becomes like this ever again. This is too much.’

Others lamented that some residents were more vulnerable to the heat than others.

‘I feel for those people whether they’re the elderly demographic or people who live on the downtown eastside of Vancouver who don’t have a cool spot to live or sleep,’ said river swimmer Graham Griedger. 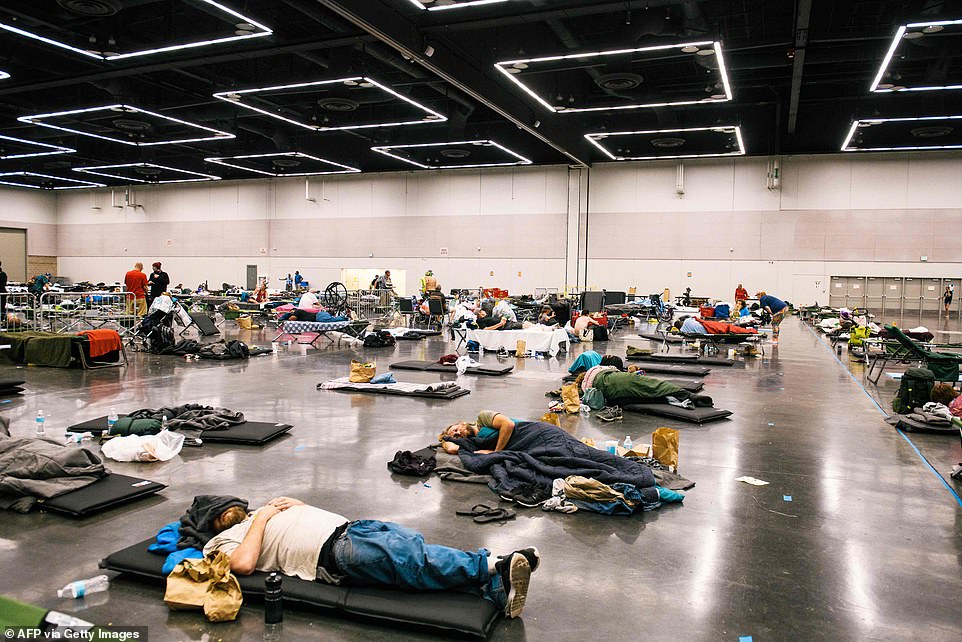 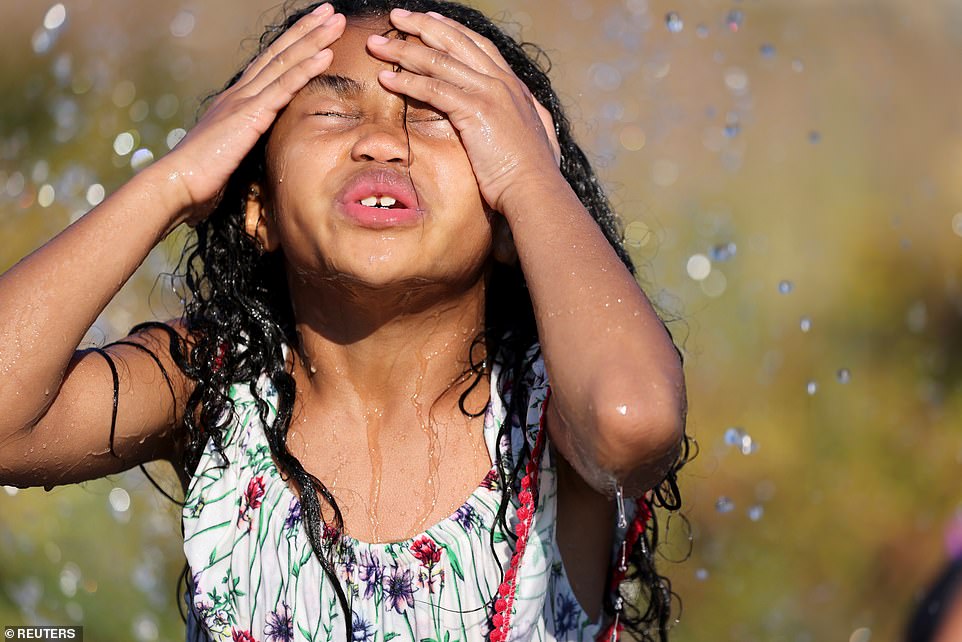 SEATTLE, WASHINGTON: Isis Macadaeg, 7, plays in a spray park at Jefferson Park during a heat wave on Sunday 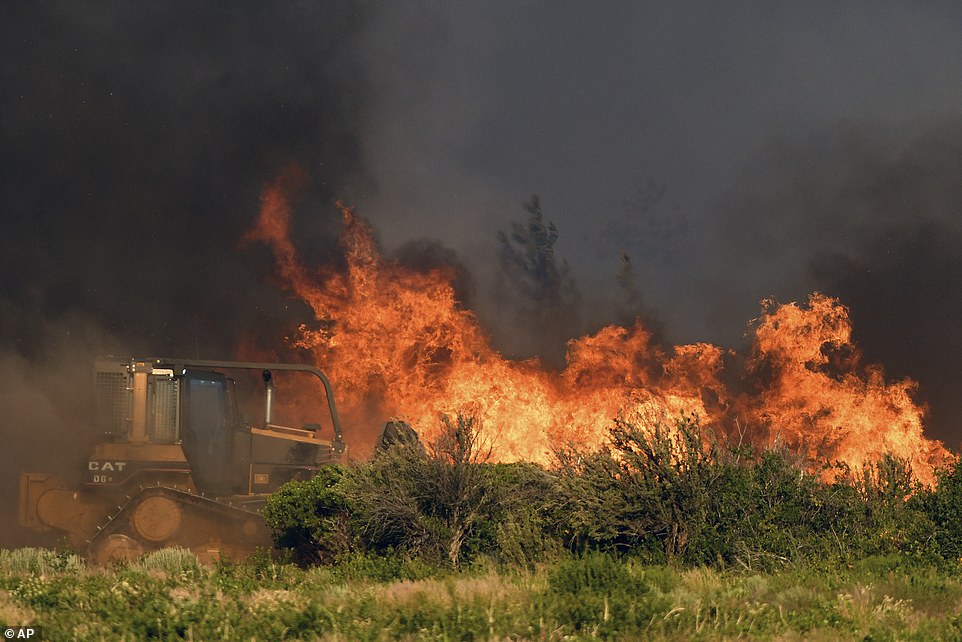 WEED, CALIFORNIA: A bulldozer operator works on a fire line as vegetation burns nearby at the Lava Fire on Monday north of Weed

The heat dome is also affecting the US west coast, with temperatures in Portland and Seattle reaching levels not seen since record-keeping began in the 1940s: 115F and and 108F in Seattle Monday, according to the National Weather Service.

Vancouver on the Pacific coast has for several days recorded temperatures above 86F (or almost 20 degrees above seasonal norms).

He urged ‘checking up on those people we know might be at risk, making sure we have cold compresses in the fridge or we’re staying in the coolest part of our homes, and making sure that we’re taking steps to get through this heat wave.’

Environment Canada has issued alerts for British Columbia, Alberta, and parts of Saskatchewan, Manitoba, Yukon and the Northwest Territories, saying the ‘prolonged, dangerous and historic heat wave will persist through this week.’

The heat wave has forced schools and Covid-19 vaccination centers to close in the Vancouver area, while officials set up temporary water fountains and misting stations on street corners.

Stores quickly sold out of portable air conditioners and fans, so several people without cooling at home told AFP they hunkered down in their air conditioned cars or underground parking garages at night.

Cities across the western United States and Canada opened emergency cooling centers and outreach workers handed out bottles of water and hats.

The extreme heat, combined with intense drought, also created the perfect conditions for several fires to break out over the weekend, and one blaze on the California-Oregon border had already burned about 1,500 acres (600 hectares) by Monday morning.

‘Dubai would be cooler than what we’re seeing now,’ David Phillips, a senior climatologist for Environment Canada, told AFP on Monday.