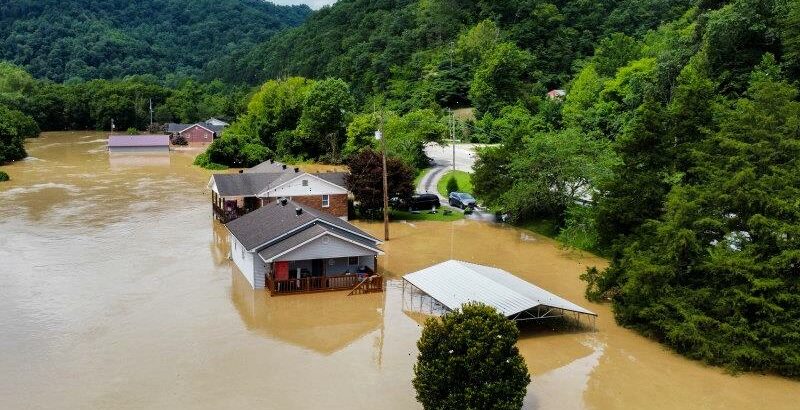 Kentucky: The death toll in eastern Kentucky has increased to 16 as floodwaters swept through homes, washed out roads and pushed waterways over their banks, Governor Andy Beshear said, warning that more fatalities were expected.

On Friday (US time), the National Guard and the State Police used helicopters and boats to rescue dozens of people from homes and vehicles in Kentucky’s eastern coal-mining region. Video footage from local media showed floodwaters reaching the roofs of houses and turning roads into rivers. 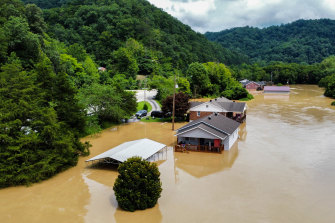 Muddy water from a nearby river seeps into homes in Jackson, Kentucky.Credit:The Washington Post

“The tough news is 16 confirmed fatalities now, and folks that’s going to get a lot higher,” the governor said later at a briefing. He said the deaths were in four eastern Kentucky counties.

About 23,000 homes and businesses are without power.

At least 300 people have been reported rescued by emergency crews, Beshear said at a morning news conference. That number will likely climb, he said, considering that more than 100 people alone have been saved in National Guard airlifts. 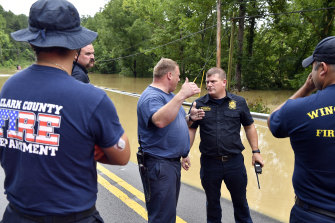 Members of the Lexington, Winchester, and Clark County Fire Departments and emergency medical services, coordinate efforts to get evacuees across the flooded Troublesome Creek in Jackson.Credit:AP

In Garrett, Kentucky, a coal-mining town about 201 kilometres east of Lexington, brown floodwaters swirled through a commercial street and backed up against storefronts, video clips showed. Rescue boats carried people wearing life jackets along the submerged street, past the tops of vehicles poking through the high water.

“Everything is gone,” Garrett resident Rachel Patton told WCHS-TV as she cried. “We had to swim out and it was cold. It was over my head. It was scary.”

Authorities went door-to-door on Thursday (US time) in a low-lying area in Jackson, Kentucky, a town of 2200 people, ordering them to evacuate after inspectors noticed a discharge from the nearby Panbowl Lake Dam.

“Late last night and early this morning, we thought that a real breach was imminent; we are hoping that’s not the case. We were actually a little bit more optimistic but still concerned,” Beshear said. 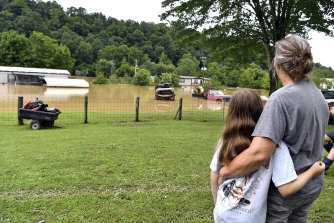 Bonnie Combs, right, hugs her 10-year-old granddaughter Adelynn Bowling watches as her property becomes covered by the North Fork of the Kentucky River.Credit:AP

Flood warnings and watches remained in effect throughout the day for the eastern half of the state as well as northeastern Tennessee and western West Virginia, where more rainfall was expected to swell waterways already well above their flood stages, the National Weather Service said.

Rivers across the region were expected to crest on Friday and throughout the weekend, while a risk of more dangerous flash flooding remained possible again throughout the day, the weather service said.

As much as 30 centimetres of rain has fallen in parts of the region over the last week, according to the service, which forecast another 1.3 centimetres would fall on Friday.

President Joe Biden called Beshear on Thursday night to offer federal help, the governor said. On Friday, Biden declared a major disaster in Kentucky, allowing federal funding to be allocated to the state. 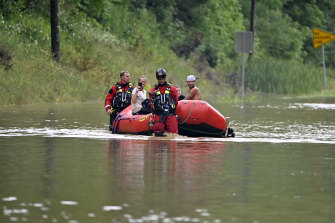 In the US West, heavy rains battered Las Vegas, where floodwater washed over streets and rushed onto several casino floors and into parking garages along the famed Las Vegas Strip, video posted on local media and social media showed.

At Circa Casino, workers tried to sweep the water away from the flooded floor, while at Planet Hollywood, water rained down on a casino table from what appeared to be a hole in the ceiling.