At least two confirmed dead, 183 rescued after passenger ship caught fire at sea as it was approaching Mindanao island. 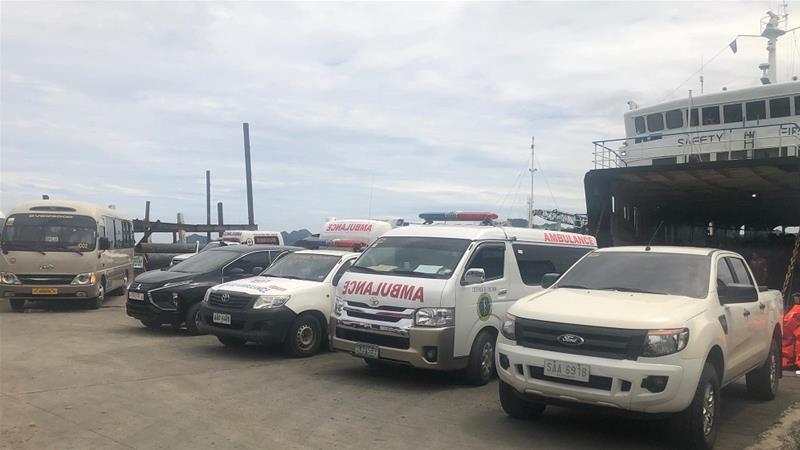 At least two people have been reported dead after a ferry in the Philippines, carrying more than 100 passengers and crew, caught fire as it was approaching a port city in the southern island of Mindanao.

Dr Rolito Cataluna, city health officer of Dapitan where the vessel was scheduled to dock on Wednesday morning, confirmed the two fatalities in a video message sent to Al Jazeera.

Cataluna said the death toll could go up after authorities verified reports from the ground.

At least 183 other passengers have been rescued by three vessels nearby, he said. Seven crew members were left in the abandoned boat as it drifted further south in the Sulu Sea, he added.

There were conflicting reports on the total number of people on board the ship.

Michael John Encina, a spokesman of the Philippine Coast Guard in Cebu, where the vessel originated, told Al Jazeera that the official manifest showed 138 passengers and 38 crew members, or a total of 176, on board the ferry. But he said that number could still change.

A Philippine Coast Guard official in Dapitan was quoted by a local news report as saying that they received a call from the captain of Lite Ferry 16 at 12:30 am on Wednesday (1630 GMT Tuesday) asking for immediate help.

It was unclear what ignited the fire.

Encina said the vessel received clearance from the Coast Guard before it headed out to sea.

“All the necessary safety certificates were complied before the ship was allowed to leave,” he said.

Agolong also said that at the time of the boat fire, the area was experiencing harsh weather and large waves, making the rescue more difficult. Tropical storm Jenny has been lashing the country in the last few days.

Allan Barredo, a passenger of one of the vessels that responded to the distress call, posted images on social media showing the ship blazing in the dark as it was engulfed in a huge fire.

One video he posted showed several passengers wearing life jackets standing at the edge of the roll-on/roll-off ferry, while an orange rescue raft was floating nearby.

“We rescued about 50. Not sure about the rest,” he wrote on his Facebook page.

In another post, he said that no rescue ship or coastguard boats showed up four hours into the incident.

But Encina, of the Philippine Coast Guard, said authorities “immediately” responded by coordinating with the passenger vessels nearby to help in the rescue operation.

The ship had departed the island of Cebu in the central Philippines on Tuesday night and was only 1.5 nautical miles (2.7km) from the port of Dapitan when the incident happened.