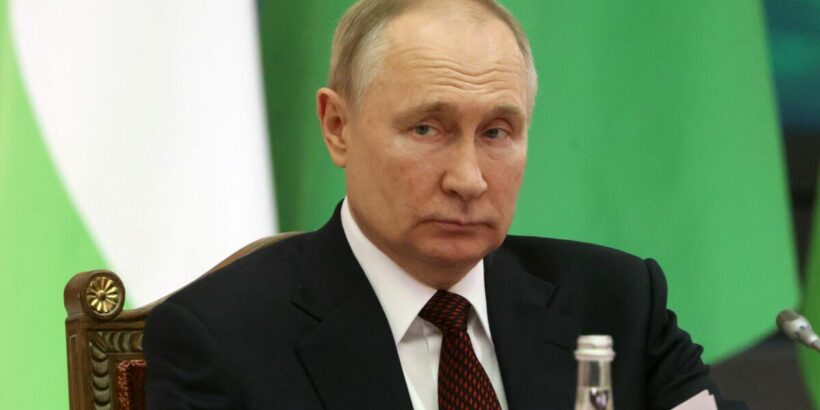 Ukrainians in Kyiv celebrated New Year’s Eve by singing songs and chanting insults for Vladimir Putin, even as exploding drones sent by the despot struck the city, social media posts reveal. One Russian drone even reportedly had a New Years’ message inscribed on it, as Ukrainian officials claim to have shot down 45 of them over the course of the night.

This is the Ukrainian word for d***head, which has become a byword for tyrant Vladimir Putin. She added that Ukrainians also celebrated by singing “the national anthem and other good songs and cheer loudly for our air defence.”

In a video she uploaded of the scene, the word can be heard rising from the streets of the capital in defiance against the continued airstrikes.

The Russians also marked the occasion by reportedly inscribing “Happy New Year” on one of the drones fired at Ukrainian civilians.

Andriy Nebytov, the chief of police in the capital Kyiv, posted images of the drone on Facebook. The drone wreckage featured crude drawings of a gift, as well as a bauble labelled “boom”.

Mr Nebytov described the artwork as “cheap and tasteless!” and “a real orco-style”, referencing the name “orcs” often given to Russian soldiers by Ukrainian armed forces.

He added: “This wreckage is not in the front where the fierce fights are going on, it is here in the playground where children play.

“That is all you need to know about the terrorist state and its army.”

The drone was marked as a Geran-2 – the Russian name for the Shahed-136 drones acquired from Iran, and which have been used regularly used against Kyiv in recent months.

The strikes across Ukraine on New Year’s Eve also included at least 20 cruise missiles, officials said. These killed one person and injured 20 more in what one Ukrainian official described as “terror on New Year’s Eve”.

The cruelly-timed strikes followed several major bombardments – including, in particular, on December 29, when over 120 missiles were launched at Ukraine. The Ukrainian Air Force described this as one of the biggest waves of strikes in recent months.

Russia said the latest strikes targeted locations involved in the manufacture of drones, with the aim of limiting attacks on Russia.