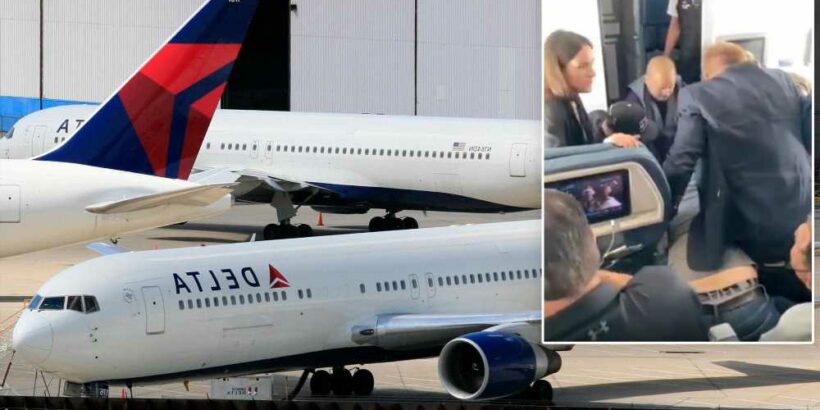 Drunken beautician booted off flight for some ugly behavior

A Delta Airlines flight to Tennessee was forced to land in New Mexico on Friday after an unhinged passenger reportedly tried to break into the cockpit.

The plane from Los Angeles was diverted to Albuquerque, where it landed at around 2:20 p.m., according to local station KOAT-TV.

The suspect was taken in to custody and the aircraft then continued on to Nashville, according to the report. No one was injured.

“The passenger was not successful. The plane landed safely and the passenger was removed by police and the FBI. He is in custody now,” Delta said in a statement to the station.

A woman named Jessica Robertson tweeted more than two minutes worth of footage of the hogtied suspect being restrained at the front of the plane.

The man can be heard crying out “you gotta stop this plane” at least 25 times in a row and with increasing urgency — as three men near the cockpit hold him down on the floor.

“This was our view from the 3rd row right after the @Delta attendants and passengers apprehended the person who attempted to get into the cockpit,” Robertson wrote. “He was screaming ‘Stop the plane.””

The men are then seen dragging the suspect to the back of the plane, away from the control room.