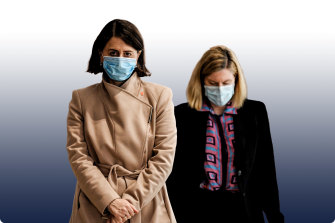 The Delta strain outbreak instituted a new daily ritual for Sydneysiders and, later the rest of the state, where everybody stopped for the 11am briefing by the Premier Gladys Berejiklian and her team. The latest case numbers, hospitalisations, new restrictions, vaccination data – all would be outlined. And, increasingly, a roll-call of deaths would leave the state crestfallen.

The last two-and-a-half months have been an unrelenting saga of abrupt twists, turns and outright backflips as the outbreak resisted every attempt to bring it to heel.

An infected worker from a nail salon in Westfield Bondi Junction attended a birthday party attended by up to 40 people in West Hoxton. The party is later identified as a superspreader event for western Sydney.

NSW Health asks tens of thousands of people who visited Westfield Bondi Junction on the weekend of June 12 to get a COVID-19 test, regardless of symptoms.

Light-touch lockdown in four eastern suburbs Local Government Areas (LGAs): Waverley, Randwick, Woollahra, and City of Sydney. Leave home for four reasons: food or other services; travel for work or education if you can’t from home; exercise; or medical or caring reasons.

Lockdown extended by a week: limits of two for exercise; 10km limit from home (except within LGA); only one person a day can shop.

State government announces Fairfield workers leaving their LGA for work must get a COVID-19 test every three days. Workers who move between Greater Sydney and regional NSW must get a weekly test. NSW sets aside $4.1 billion to support businesses and workers who have had their hours cut.​

NSW records 111 new cases. Construction shut down for two weeks. Government finally agrees to define “authorised″⁣ workers and rules for these workers are put in place for Fairfield, Liverpool and Canterbury-Bankstown LGAs. (Originally no workers were allowed to leave those three LGAs unless in health or emergency services, this later modified to require mandatory three day testing for authorised workers in Canterbury-Bankstown and for aged and health care staff in Fairfield and Cumberland.) Non-essential retail click and collect only, and takeaway for food services.

Premier announces a “national emergency” and appeals to the national cabinet for other states to divert Pfizer vaccines to NSW. Up to 136 new cases.

ATAGI relaxes its advice around use of AstraZeneca, saying all over 18s in Greater Sydney should “strongly consider” taking any available vaccine. Cumberland and Blacktown were added to the list of hotspot LGAs.

Greater Sydney is locked down for another month. Now eight restricted LGAs with Parramatta, Georges River and Campbelltown added. NSW and federal governments announce a boost to support for businesses and individuals. Up to 177 new cases.

ADF troops join police in door knocking and logistical support such as roadblocks.

Hunter and Upper Hunter go into lockdown. Up to 262 new cases.

Penrith’s suburbs designated as a hotspot.

Dubbo goes into lockdown until at least August 28.

Strathfield, Burwood and Bayside added to the now 12 LGAs classified as “of concern”. Up to 345 new cases.

Lockdown extended statewide as cases spread into western NSW. Operation Stay At Home announced for Greater Sydney. The 10 km from home radius becomes 5kms: a strict 5 km from home for the 12 LGAs of concern; others can travel freely within LGA but no more than 5 km from home if leaving LGA. Permits will be required to travel to regions. Police roadblocks on major roads out of Sydney. Huge increase in fines. Up to 466 new cases.

Lockdown extended until the end of September. Now more than 10,500 cases since the outbreak began. Masks are mandatory outside. A 9pm to 5am curfew imposed on LGAs of concern plus shut down of retail such as nurseries, hardware and office supplies. Surveillance testing for authorised workers from LGAs of concern replaced by evidence of first vaccine dose or rapid antigen testing at work.

* All dates when measures were announced.