Dementia-hit pensioner, 88, asked ‘What’s going on?’ moments before plummeting to his death in faulty care home lift less than an hour after it had been serviced

A pensioner with dementia asked ‘What’s going on’ moments before plummeting to his death in a faulty care home life, an inquest heard.

The lift was more than 20 years old and malfunctioned due to a fault in the door mechanism.

A coroner heard engineers had serviced the lift twice in the week of Mr Bardsley’s death, including less than an hour before it crashed into the basement.

The inquest also heard previous inspections had found other less serious faults in the lift but no works were carried out on it because the managers had not read the reports. 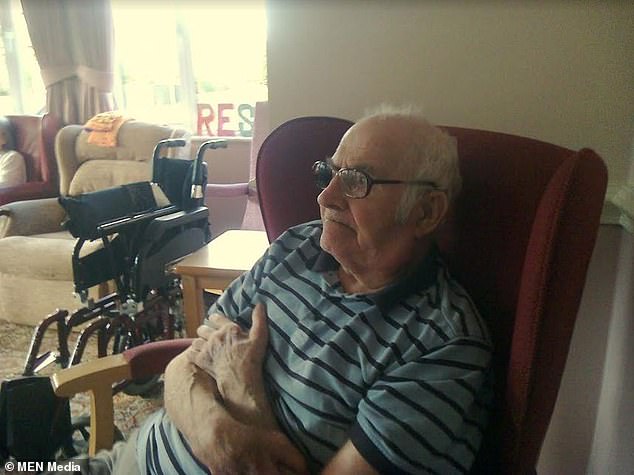 Kenneth Bardsley, 88, pictured, died of ‘catastrophic injuries’ caused when a lift he was in at his Greater Manchester care home plummeted into the basement despite being serviced less than an hour before the crash

On January 30, 2017, Mr Bardsley, a retired export packer, was wheeled from his room by care worker Sharon Cover to go to the ground floor for lunch.

Ms Cover had noticed earlier that morning that the lift was out of order, but said a Lancs and Cumbria Lifts engineer gave her the all-clear to use it.

But shortly after loading Mr Bardsley’s wheelchair into the lift, which had an outer door and an inner bi-folding metal door, the car came to a halt.

Ms Cover sounded the lift alarm and shouted out to colleagues that she was stuck and could see a door ‘hanging off its hinge’ and Mr Bardsley was asking ‘What’s going on?’, when they suddenly plummeted to the basement.

Ms Cover said: ‘He was shouting, I was screaming. When we hit the ground the panel from the top of the lift hit his head, I heard him say “Oh my God”. The walls of the lift came in.’

The carer hit her head on the handle of the wheelchair and injured her jaw.

Colleagues arrived to find the lift had dropped below the basement floor and the doors had caved in on them.

Described as ‘covered in blood’, Ms Cover had to be pulled from the lift while a ‘grey and groaning’ Mr Bardsley was wheeled out and taken up to the ground floor.

Paramedics were called but during assessment, Mr Bardsley deteriorated and went into cardiac arrest.

He was taken by ambulance to Salford Royal Hospital, where he later died.

An inquest jury concluded that Mr Bardsley’s death was accidental, caused by multiple injuries, including a fractured pelvis and ribs.

It is not known if the door fault found by an expert to have caused the accident was identified before Mr Bardsley was injured.

Back-up safety gear also failed, but this fault had never been found during inspections.

She also said the Care Quality Commission (CQC) had not picked up in 2014 that faults identified with the lift had not been acted upon.

After the hearing at Stockport Coroner’s Court, Mr Bardsley’s daughter Carol said: ‘We never anticipated anything like this would ever happen.

‘In the latter part of his life he had a stroke and my brother could no longer look after him as he needed professional help. We had every faith that the care home would help us.

She added: ‘The past two years have been tough for the whole family. 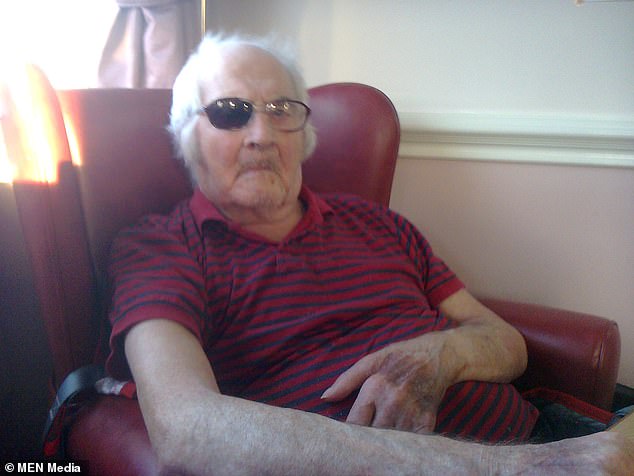 Mr Bardsley, pictured, asked ‘what’s going on?’ to his carer when the lift door malfunctioned

‘It’s been a very long wait and we’ve finally had some of the answers that we have been searching for.

‘We wouldn’t want any other family to have to go through what we have.

‘My father was a hardworking, family man and there will always be a big gap in our lives that will now never be filled. He will be greatly missed by all who knew him.’

Josmy Anish, the care home’s manager, said the lift had issues ‘every now and then’ and the problems were ‘mainly the doors’.

At these times, Lancs and Cumbria Lifts, which carried out four service checks a year, would be called out to fix it.

Lancs and Cumbria Lifts had twice been out to look at the lift in the week before it crashed into the basement.

The first of these checks was a call-out a week earlier over reports the door was ‘sticking’ and a service engineer identified a fault with the top of the door, but returned it to service pending repair.

A second visit was for a routine service less than an hour before Mr Bardsley got into the lift.

The fault later found by the Health and Safety Executive (HSE) to have caused the incident was in a pin at the bottom of the door and it is not known if this issue arose before or after the visits by lift engineers.

The lift was also subject to twice-yearly regulatory examinations by services firm Bureau Veritas, the last of which had been in November 2016.

However, Ms Anish admitted she ‘did not see the back of the reports’, adding: ‘I wasn’t aware there was a second page.’

Ms Anish said she thought the engineer would ‘tell them and do maintenance there and then’, adding ‘now I read every single page’.

But Shazir Karim, a director at Bureau Veritas, said the onus was on the care home to make the necessary repairs. 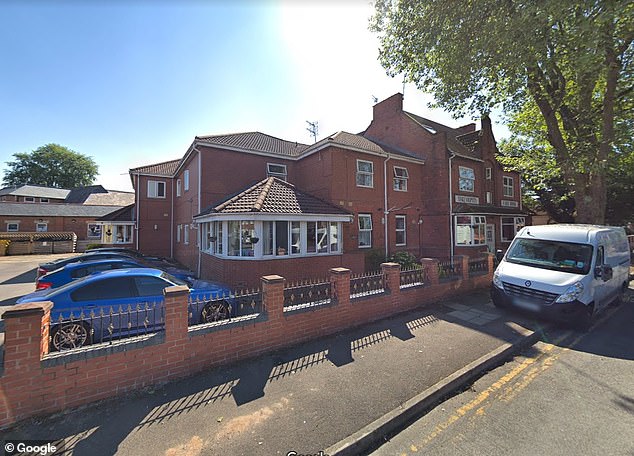 The inquest heard the lift at Serendipity Care Home in Urmston, Greater Manchester, had faults found in a previous inspection but that management had ‘not read the reports’

Lancs and Cumbria Lifts were called out on January 23, 2017, to reports the door was ‘sticking’ and the firm’s handyman said he was informed a part was needed for the door to replace a makeshift bolt.

However, while Ms Anish believed Lancs and Cumbria Lifts would proactively fix this, the firm said they were awaiting a purchase order for the needed part.

On January 30, a second engineer, who said he had not been aware of his firm’s visit on January 23, carried out a routine service check before putting the lift back into service.

He said if someone had mentioned the breakdown of seven days earlier he would ‘probably have rung the office’ and further investigated the doors.

Less than an hour later, Mr Bardsley used the lift.

Tabinda Dahir, the care home’s owner, told the coroner she had asked Lancs and Cumbria Lifts if she needed to replace the lift in 2013 but had been advised this wasn’t necessary.

She also said that, although Alan Sharples of Lancashire and Cumbria Lifts had ‘recommended’ in 2015 that the door be refurbished, he had advised this could be carried out ‘at a later date’.

Ms Dahir added: ‘I don’t know about these mechanical things. It was up to an expert to suggest to me what we need. Nobody ever said this lift shouldn’t be used.’

The court heard that Lancs and Cumbria Lifts had never seen the reports from Bureau Veritas detailing faults with the lift.

Alan Sharples, director of Lancs and Cumbria Lifts, said he employed only qualified and experienced lift engineers and argued the onus was on the care home to show them the reports. Care home bosses insisted the firm had never asked to see them.

He said he would have supplied a new lift in 2013 had he been asked to, and he denied Ms Dahir’s claims that in June 2015 he had advised against refurbishing the lift doors.

Andrew Crouch, a mechanical engineer for the Health and Safety Executive, inspected the lift after the incident.

He said the door had come out of the runner and jammed in the lift shaft.

The lift car became snagged on the left hand inner car door on the floor below. 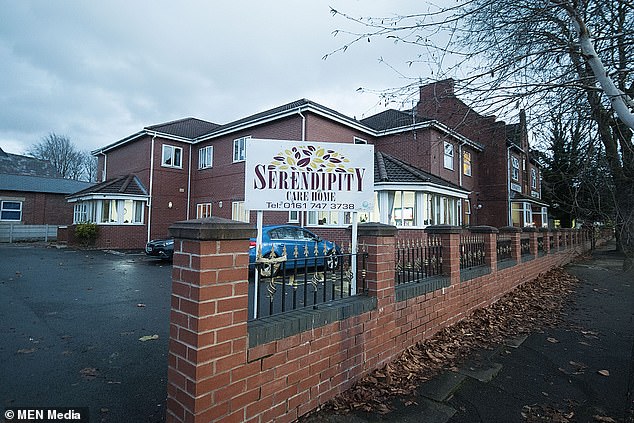 The inquest also heard the lift at the care home, pictured, had ‘crude repairs’ to previous issues but that they did not cause the accident

However, the hydraulic cylinder that allows the lift to move continued to descend.

This left the car suspended on just one door panel, not intended to take this weight.

The ropes holding up the lift slackened and the lift eventually gave way, causing it to ‘plunge’ into the cellar.

Mr Crouch described ‘crude repairs and bodging’, including a metal bolt and wooden screw attached to the lift. However, he did not find these to be linked to the incident.

Mr Crouch told the inquest: ‘The absence of the roller pin in the bottom of the door allowed the door to kick out at the bottom.

‘In my view with a little bit of investigation and a torch you would have seen the roller had gone.’

He said a safety device which activates a safety gear should have stopped the incident, but that factors including ‘wear and tear’ had ‘conspired together to cause a loss of traction of the pulley rope’.

He said this would not necessarily have been picked up in routine service engineer tests.

There had been a heavy reliance on just one safety device and there should have been other safety devices according to British 2003 standards, he added.

Det Insp Thomas Gilbert, who investigated the death on behalf of Greater Manchester Police, said they had considered two possible offences – gross negligence causing manslaughter and corporate manslaughter, but that the case had not passed the ‘high threshold’ to bring these charges.

Dr Lumb, a Home Office pathologist, told the court the cause of death was multiple injuries, including fractures to Mr Bardsley’s ribs and a fractured pelvis, consistent with a ‘fall from a height’, which caused extensive blood loss.

Contributory factors, he said, were osteoporosis and heart disease.

Daniel Denton, lawyer at Slater and Gordon, said: ‘Kenneth Bardsley was a frail and very vulnerable gentleman who had suffered from worsening dementia for several years.

‘We hope that lessons will be learned from this unnecessary death and changes will be implemented to make sure this never happens to anyone else.’

Coroner Alison Mutch OBE said she would draft a report on the problems with the current system to try to prevent future deaths. This would include: