A group of 10 Democratic senators, led by Minority Leader Charles Schumer, is urging Vice-President Mike Pence not to preside over the chamber for the confirmation vote of Supreme Court nominee Amy Coney Barrett, given the latest outbreak of the coronavirus at the White House.

In a letter, the senators argued that Pence's presence would not only violate guidelines from the Centres for Disease Control and Prevention but that it would "be a violation of common decency and courtesy" after five people who work for or advise Pence tested positive for the virus. 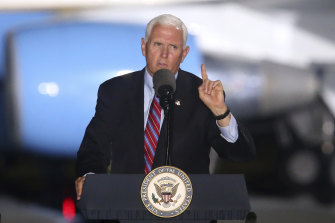 Vice-President Mike Pence has been urged to stay away from Amy Coney Barrett’s confirmation vote.Credit:AP

"Your presence alone could be very dangerous to many people – not just to senators, but to all the truly essential staff – Democratic and Republican – who must be physically present inside the US Capitol for it to function," they wrote.

The senators said that Pence would not be needed to break a tie and that his presence would be purely "ceremonial".

Republicans hold a 53-to-47 advantage in the Senate, and only one Republican senator – Susan Collins of Maine – has indicated that she would oppose the nomination of the judge, President Donald Trump's third pick for the high court.

The confirmation vote is expected on Monday evening in the US (Tuesday AEDT).

White House Chief of Staff Mark Meadows told reporters on Monday that plans for Pence to preside over the confirmation vote are "in flux".

"The Vice-President obviously has great knowledge about the disease and the pandemic, and he knows the right protocols to follow, and I have every confidence that he's following those protocols," Jared Kushner, the President's son-in-law, said of Pence, who serves as chairman of the White House coronavirus taskforce.

A spokesman for the Vice-President's office did not respond to inquiries on Sunday about whether Pence planned to attend the vote for Barrett, who comes from Pence's home state of Indiana. Pence is regularly summoned to the Capitol to preside over major votes for the administration, or if he needs to break a tie.

Pence's public schedule for Monday, released on Sunday night, did not include a trip to the Capitol, although his plans can be revised during the day. He is set to return to Washington shortly after 6pm on Monday after campaigning in Minnesota

Pence had indicated this past weekend that he wanted to preside over the vote.

"As Vice-President, I'm president of the Senate. And I'm going to be in the chair, because I wouldn't miss that vote for the world," Pence said on Saturday night at a campaign rally in Tallahassee, shortly before the disclosure of the coronavirus outbreak within his staff. "Come this Monday night, Judge Amy Coney Barrett is going to be Justice Amy Coney Barrett. We're going to fill that seat."

Senate Majority Leader Mitch McConnell, who has been highly critical of how the White House has not abided by public health guidelines on its property, declined on Sunday to answer multiple times whether he preferred that Pence stay away from the Capitol for the confirmation vote.

Although Pence has had close contact with his chief of staff, Marc Short, who tested positive for the virus, aides said the Vice-President will continue with his scheduled events because he is considered essential.

Pence's office said on Monday that he and his wife, Karen Pence, have tested negative for the coronavirus.

Our weekly newsletter delivers expert analysis of the race to the White House from our US correspondent Matthew Knott. Sign up for The Sydney Morning Herald‘s newsletter here, The Age‘s here, Brisbane Times‘ here and WAtoday‘s here.