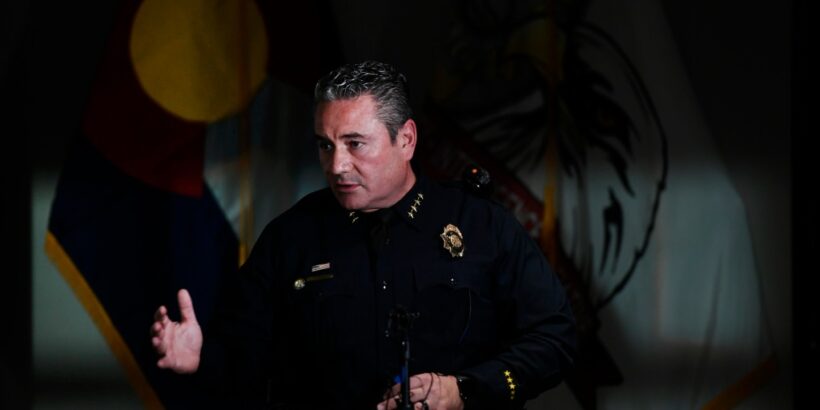 Paul Pazen wasn’t sure he was going to get the job when he applied to work as a Denver police officer in 1994.

He had just returned to his hometown after completing five years serving in the U.S. Marine Corps during the Gulf War. When the department hired him, he set his aspirations on becoming a patrol sergeant, which seemed like the best job in the world.

“My goals were pretty simple,” he said. “I’ve been very fortunate along the way — through mentors and support — to achieve levels that I’m very thankful for.”

Twenty-seven years later, Pazen will retire from the department on Saturday after serving as its chief for four years and steering the department through what he called “the perfect horrible storm.” Beginning in 2020, the department weathered a deepening political divide, a global pandemic, the economic uncertainty that followed, and massive protests of police brutality that took over downtown Denver for days. Violence swelled in the city as the pandemic waned — the city in 2021 recorded its highest homicide rate since 2004 — as Pazen’s ranks of officers shrank.

The department had dealt with such problems previously, he said.

“But no generation of police officers or police departments had to go through all of them at the same time,” Pazen said.

The job had a pronounced impact on him, he said. Pazen said he and his family had planned for an Oct. 15 retirement for a long time. He’s looking forward to spending more time with them and relaxing.

“You do absorb some of that trauma, whether it’s crime victims or even what we saw in 2020,” he said. “I think to do this job right it does take someone who pours their heart and soul into this work and who does absorb some of that.”

Pazen said he does not have another job immediately lined up and that he is evaluating his next steps. He wouldn’t say whether he planned to run for Denver mayor.

“I just want to have a big impact on our community,” he said when asked if he planned to run for mayor. “I just want to help in any way possible, whether it’s being the face of something or doing things in the background. What has the greatest impact is what excites me the most. I know that’s a dodgy answer.”

He listed his greatest accomplishments as expanding the department’s co-responder model — which pairs an officer with a mental health professional — from four to 40 teams, which now operate 24/7 across the city. He also touted the department’s work in helping create the Support Team Assisted Response team, which sends paramedics and behavioral health professionals instead of police to some 911 calls. The department also drew national attention for solving more non-fatal shootings by creating a team that specializes in those investigations.

The department drew national attention in negative ways as well.

Some of the most difficult days of his career came during the protests as public perception of officers shifted from valued essential workers dealing with COVID-19 to villains, he said.

“In an instant, we went from hero to zero and were vilified as a profession,” he said.

The department also faced public outrage after police officers on July 17 opened fire on an armed suspect in a busy nightlife district downtown and injured six innocent bystanders, some of whom suffered serious gunshot wounds.

The announcement of his departure was met with mixed responses. Some city and community leaders thanked him for his service while others said he took the police department backward.

“We did a lot of good and I’m going to try to focus on the positive stuff,” Pazen said. “Yes, there are challenges and, yes, you can always learn from responses and ways to do things better moving forward. But overall, we were dealing with multiple complex issues that I don’t think we ever could’ve conceived.”

Pazen said he was thrilled Mayor Michael Hancock selected Ron Thomas to become the next chief. Thomas took over day-to-day operations of the department in September.

“Whatever the next step is I want to help make a positive impact on the issues that we’re facing,” he said of his future. “Public safety is such an integral part of it. Public safety is foundational, as Maslov’s hierarchy of needs points out.”