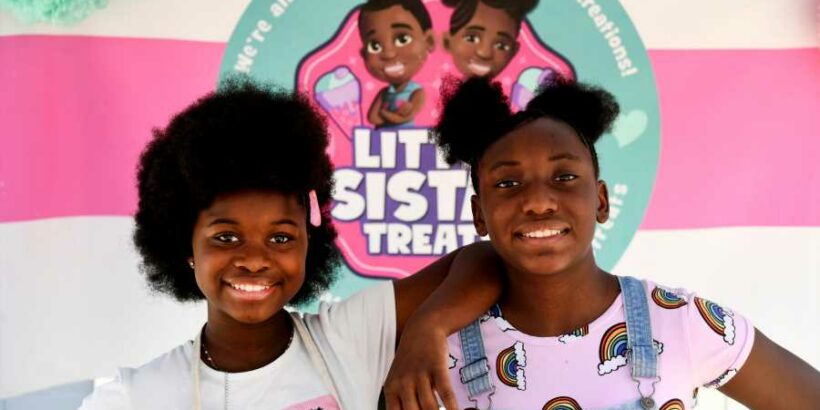 For sisters Zyaire and Char’Les Hawkins, selling out of a few hundred baked goods at the Denver Juneteenth celebration is just another day in business.

The 12- and 10-year-old girls have been running Little Sistas Treats for about a year now, offering cheesecake cones and more colorful creations that they make together in their family’s Highlands Ranch home.

Their signature treat is a sugar cone filled to the brim with from-scratch cheesecake (or their great-grandmother’s peach cobbler) and toppings like fruits, homemade jams, chocolates and more ingredients, “layered like lasagna,” Char’Les explained. “It’s something we invented ourselves.”

While the cones right now are store-bought, they plan on making them themselves in the future.

You’ll find information about upcoming events as well as treats for sale at the Little Sistas website, littlesistastreats.com

“Wait until they get their bakery,” their mother, Marietta Hawkins, said, adding that there are plans for gluten-free and vegan options. Also, the coating of the cones is homemade, and “it is their own recipe,” Hawkins added.  Coatings include chocolate and crushed candies, as well as cookie and nut crumbles.

Word of the treats is spreading. The Little Sistas have been featured on “Good Morning America,” and recently they got to chat with Denver Mayor Michael Hancock, who posted about their business on social media.

For the Hawkins sisters, all of these appearances have felt like a big honor, and also just another part of the process.

“We’ve been doing a lot lately,” Zyaire said. “Filling orders, baking, cooking … . We’d just switch back and forth from school and work, so we just have to work it out and hope for the best.”

Zyaire and Char’Les have been baking since they were little, a passion passed down from their great-grandmother, M. Faye Vaughn, who for more than 50 years owned a restaurant and cooked for her community in Hannibal, Mo.

“The best part about this past year for me,” the girls’ mother said, “My grandma (Vaughn) came to Colorado and taught them how to make traditional treats like cinnamon rolls, pie doughs, monkey bread and hot cross buns … things that a lot of people their age will not learn until they get to culinary school.”

Char’Les first imagined starting a dessert business back in preschool. At 4, she would draw pictures and explain to teachers that she wanted to have an ice cream truck someday. Her sister said she’d like to be a partner, and Marietta entertained the idea, asking them questions back at home about all of the flavors they’d make and what they’d charge for their cones.

By the time 2020 and the pandemic rolled around, the girls had become seasoned home cooks and bakers. With the whole family stuck inside for much of the year, Marietta looked for ways to teach them through hands-on activities, and to bring some much-needed cheer to everyone else who was homebound in their neighborhood.

She suggested they deliver treats to high school graduates, and then to moms for Mother’s Day, “and the people’s responses were just crazy,” Marietta said. “A lot of mothers were crying.”

The girls, too, were inspired. They started to plan, holding meetings, then asking their mom if they could go into business for real.

“At first it was super cute,” Marietta said. “And I keep asking them, do you guys want to quit, are you tired? Because they’re kids … . Their original goal was an ice cream truck, now they want a bakery and a factory. And I’m thinking: Who is stopping them?”

The Hawkins sisters received a donation to get their business off the ground from another like-minded set of South Denver entrepreneurs, the owners of Sugar Sisters Bakery, who wrote a check for just over $1,000. “It helped us invest in our business,” Zyaire said. “We had our LLC, and we (opened) our own bank account.”

“I think what they’ve learned, from what I’ve seen,” Marietta said, “is they learned the value of a dollar. When you actually can deposit money into your own bank, it’s tangible.”

As the sisters ramp up events and sales over the summer, their “momager” is taking them on the road. Her oldest, Cayden, is 17 and looking at colleges, so the family of five (including Zykel, 14) packs into the car for school visits. “And wherever we go, people want treats,” Marietta said with a laugh.

While their older brothers are budding athletes (and stars in their own right), Char’Les and Zyaire aren’t stopping with Little Sistas. They’ve got their own futures planned.

“And I want to still do this business, with my sister hopefully,” Char’Les added. “And I want to be a judge while I’m doing that.”