Some £600million will be pumped into 178 NHS trusts to bankroll the construction of new wards, update electrics and even replace lifts over the next three months.

The Department of Health revealed the funding boost today, after rubber-stamping 1,800 projects for urgently needed upgrades in hospitals.

The money – which will also see old wards refurbished and ventilation systems improved – is for projects set to be completed by March 2021.

Boris Johnson won over voters with his promise to ‘build back better’ during the election, and sign off ’40 new hospitals across England over the next decade’.

But it turned out many of the projects included refurbishments of existing hospitals, with only six trusts actually being rebuilt.

Today’s announcement allocates part of the £1.5billion pledged for ‘accelerating’ improvements to the health service.

It comes on top of massive investments made in the NHS during the pandemic, including more than £450million into improving A&Es this winter by expanding waiting areas, and the Nightingale hospitals – reported to have cost £220million. 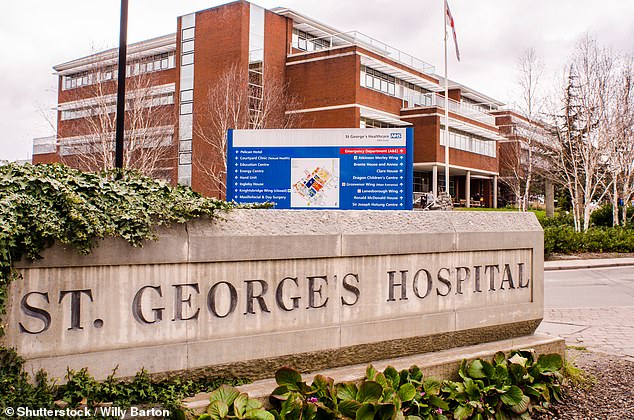 The Department of Health has revealed it is pumping £600million into 178 NHS trusts. Of the ten receiving the most money, four are in London. St George’s will get the most at £37million

Of the top ten hospitals receiving the most funding, four are in London.

St George’s Hospital, in the capital, will receive the most – at £37million – to construct a new MRI building for cancer patients alongside other projects.

It will be followed by Nottingham NHS, which is receiving £17million for vital works.

And Northampton NHS will get £16.7million, which will mostly be used to fund the construction of a new critical care centre.

Croydon NHS, in London, will get £3.3million to build a new paediatric integrated unit.

And the Northern General Hospital, in Sheffield, will get £2.7million to refurbish its operating theatres and an additional £10million for other projects.

The Department of Health said the total amount of money spent has been evenly distributed across England, with more than half of all projects taking place in the Midlands, North East and Yorkshire and the North West.

The remaining £900million has been earmarked for further improvement work, alongside plans to modernise mental health facilities, expand A&E capacity and improve infection control ahead of winter.

The Health Secretary, Matt Hancock, said the expenditure proved the Conservative Government was making good on its pledge to ‘build back better’.

‘Alongside delivering on our manifesto commitment to build 40 new hospitals and 20 major hospital upgrades across the country, this investment will help our NHS build back better,’ he said.

‘These crucial maintenance projects will deliver immediate benefits and provide NHS staff with the facilities they need to provide world-class care to their patients this winter, helping to ensure the NHS is always there for you when you need it.’

To secure the funding, hospitals were asked to put forward projects that would vastly improve their services and could be finished by March 2021.

The Government has consistently put more money behind the health service, with ministers saying they are ‘committed’ to improving the NHS.

As much as £3.7billion has already been set aside to fund six new hospitals, and the reconstruction and refurbishment of 26 others by 2030.

Announcing funding for 32 of 40 hospital projects promised in October, Mr Johnson said: ‘The dedication and tireless efforts of our nurses, doctors and all healthcare workers have kept the NHS open throughout this pandemic.

‘But no matter what this virus throws at us we are determined to build back better and deliver the biggest hospital building programme in a generation.

‘From Morpeth to Milton Keynes, we are building 40 new hospitals across England to level up our NHS so more people have top-class healthcare services in their local area.’

You can see which hospitals will receive money for upgrades here.