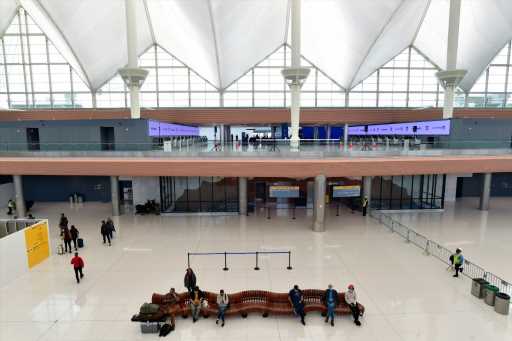 A new “lessons learned” report on Denver International Airport’s failed Great Hall partnership deal — and how it fell apart three years ago — heaps blame both on DIA leaders and on the contracting team they fired, but it particularly highlights how the airport’s inexperience with such a long-term contract helped doom it.

DIA pulled the plug in August 2019, about one year into construction of its major terminal renovation, by terminating the $1.8 billion, 34-year deal with Great Hall Partners, led by Madrid-based Ferrovial Airports and Centennial-based Saunders Construction.

In that short time, disputes over design changes and other problems had resulted in Great Hall projecting $288 million in cost overruns and project delays exceeding two years.

That deal was a public-private partnership (known as a P3) that served as a cost-sharing arrangement for the renovation work, which included the relocation of security screening and overhauls of airline check-in areas to accommodate continuing growth. It was also a money-making venture: The partners envisioned lucrative shops and restaurants in new post-security terminal spaces that Ferrovial would oversee for three decades, with DIA sharing in the revenue. The renovation itself was pegged at $650 million.

The P3 arrangement was a controversial choice at the time — and the contract breakdown marked one of the most significant project failures during Denver Mayor Michael Hancock’s tenure. The project later resumed under a new lead contractor.

The Great Hall After-Action Report, an outside review released Wednesday and produced for DIA, in part echoes past reporting by The Denver Post that showed how heavy-handed oversight by airport leaders, along with repeated change orders by the contractors, steered the project into troubled waters.

In effect, it says, each side failed to respect the role assigned to it by the contract.

“Despite the fact that DEN allotted significant control to GHP, some DEN staff had a conflicting reluctance (in many instances) to relinquish this control, leading to delays and conflicts,” the report says, using the airport code for DIA. “Often, it appeared DEN gave up control in the P3 but then wanted to keep it.”

The report does not identify or fault specific airport leaders, though the Great Hall team previously characterized airport CEO Kim Day and others as micromanaging the designs, down to choices for bathroom fixtures. Day retired from DIA last year.

The internal DIA gridlock delayed key design decisions, the report says. It also says that at the outset of the Great Hall deal, DIA insufficiently vetted and analyzed the voluminous contract, basing cost estimates on designs that hadn’t been fleshed out. And its leaders failed to set frequent-enough milestones to hold the contractors’ feet to the fire.

Those and other findings are laid out in a 96-page report completed by an outside consultant, Janet Arrowood, who also has produced lessons-learned reports on projects for the Regional Transportation District. She is familiar to current airport CEO Phil Washington, who previously led RTD.

During a briefing on the report Wednesday afternoon to a Denver City Council committee, one member took note of the report’s forward-looking approach, which is intended to be used to improve future projects.

“I gotta say, this is the most gently written evaluation of a mess this size that I’ve ever seen,” Councilman Paul Kashmann said. “Part of me wants to point fingers. I want to see who did it. On my part of it, (the 2017 contract approval was) the worst vote I’ve made on the City Council.”

Washington responded: “A lot of projects don’t work out all over the world. But there’s very few of them that do a ‘lessons learned’ to lay out a blueprint on how we can improve — and that should be our focus, I think.”

Just a year after taking on the job, Washington could be leaving soon. His nomination by President Joe Biden to become the Federal Aviation Administration’s administrator awaits U.S. Senate confirmation.

Report was requested by City Council

DIA ordered the Great Hall review at the urging of council members earlier this year when they approved the latest expansion of the terminal renovation. The expanded work restores major components that had been trimmed to save money, along with adding some new ones.

The cost has ballooned substantially, from the original $650 million to $2.1 billion. And completion now is targeted for 2027 or 2028, six years behind schedule, though Washington said the remaining work will affect travelers in the terminal less than earlier phases did.

Since the project was rebooted under new contractors in early 2020, work has proceeded more smoothly and is meeting its new budgets, with the first phase coming in $25 million below the revised estimate.

In delving into what went wrong in the original contract setup — DIA’s first foray into a public-private partnership — the new report finds DIA wasn’t the only side to blame.

The report characterizes the Great Hall team as trying to exercise an even greater level of control than it was given by the contract, contributing to the tension. The report also cites cultural differences between the Spanish company and its American partners, as well as between Ferrovial Airports and a corporate construction sibling, Ferrovial Agroman West, over which it lacked control.

And once work began, it says, key people had left the contractors and were replaced by officials with differing experience.

The report faults Great Hall Builders, the entity that oversaw the construction team, for seeking costly change orders when there were changes or updates to early design documents, surprising airport officials.

Through all of the strife, the report notes, the project was remaking an active terminal with millions of passengers flowing through it — a challenge that Ferrovial had not dealt with in prior airport projects, including the rebuilding of terminals at London Heathrow Airport. Those terminals weren’t operating during construction, unlike DIA’s terminal, and Ferrovial actually owns a stake in Heathrow.

But that experience was held up by DIA officials in 2016 and 2017 as a major reason for selecting Ferrovial.

Was a partnership the right contract approach?

The report doesn’t fault the P3 model, which it says remains “a viable approach” as long as the financial analysis for a project supports it. In the case of the Great Hall work, the analysis done for DIA didn’t particularly favor a P3 over other options, but airport leaders hoped to take advantage of private-sector expertise and shift financial risk to the contractors.

“This risk transfer was not effective on the Great Hall P3 project,” the report says, suggesting DIA “may have been better served” by a more traditional contract bidding model, or by hiring a construction manager and general contractor. The CM/GC approach is what DIA has used during the project’s reboot, hiring Hensel Phelps Construction to lead the project team under greater DIA oversight.

Among other findings in the report:

One positive finding in the report is that DIA’s contract negotiations in 2016 and 2017 resulted in more favorable termination clauses for the airport, changing how fees would be calculated and debt would be handled.

Most of the termination payments made by DIA, which totaled $183.6 million, went to compensate Great Hall Partners for actual costs it incurred; however, nearly $38 million covered Great Hall’s expected return on its investment going three decades out.

“Had these changes not been made, there is a high probability it would not have been financially or politically feasible for DEN to terminate” in 2019, the report says.

Still, Councilwoman Debbie Ortega, who cast a vote against the deal in 2017, expressed heartburn about the outcome.

“For me, one of the important things is that we always keep our money local,” she said Wednesday. “This was a company out of Spain that, at the end of the day, took a boatload of cash that they got paid out” to exit the project.