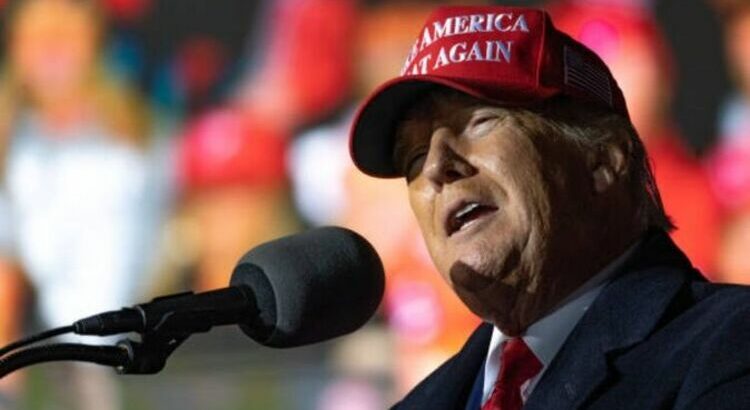 The same poll, carried out by Harvard-CAPS Harris, predicts that VP Kamala Harris would lose to Trump by 11 points, although it also says she would beat Florida Governor Ron DeSantis by a narrower margin of two points in a hypothetical 2024 election.

This comes after an NBC poll last Sunday which revealed President Biden’s approval rating has sunk to its lowest yet.

In the poll, 47 percent of respondents said they would vote for Mr Trump if he ran in the 2024 election, compared with 41 percent who backed Mr Biden.

President Biden has expressed his intention to run for a second term in 2024, however Mr Trump has yet to say for certain whether he will mount a rival campaign.

Kamala Harris had also been touted as a possible next President, after her selection to be VP made history by making her the first woman to hold the role.

However, her “deep unpopularity” may have diminished her chances, according to the Daily Mail.

In a hypothetical election against Ron DeSantis, she was slightly ahead with 40 percent of the vote compared to his 38 percent.

However, against Mr Trump it was forecast she would lose to him by a substantial margin of 11 points.

Governor DeSantis is a popular figure amongst Republicans, having been openly critical of COVID-19 legislation.

He recently signed the controversial “don’t say gay” bill into law in Florida, prohibiting any education about sexual orientation and gender identity from kindergarten until third grade.

President Biden hit back at the measure, saying on Twitter: “Our LGBTQI youth deserve to be affirmed and accepted just as they are.”

Republicans have argued that it should be the responsibility of parents rather than teachers to discuss these subjects with their children.

The NBC poll shows the Republicans holding a slight lead over the Democrats in the upcoming midterm election race.

However, 46 percent said they would prefer Republicans to have control over Congress in 2023, with 44 percent choosing the Democrats.

This shows a drop in support for Biden’s party, as the last poll carried out in January had them with 47 percent of the public vote.