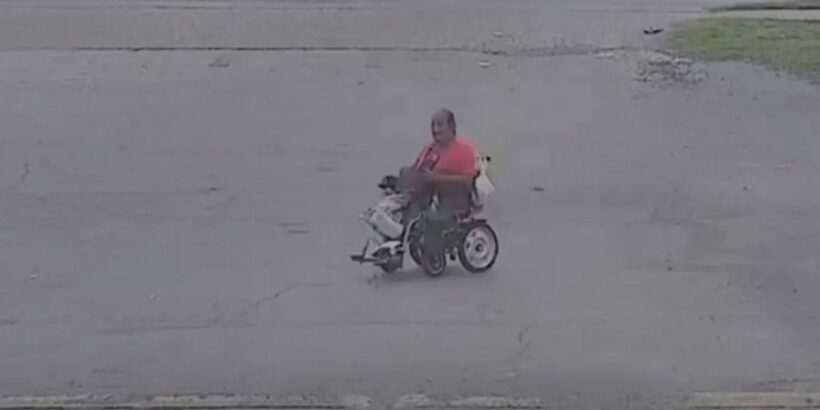 Shocking video has emerged showing a teenager allegedly running over a disabled man in a wheelchair in a car park.

Pablo Antonio Avila-Banagas, 17, was arrested and charged with injury to a disabled person, failure to stop and render aid and unlawful possession of a firearm.

The 17-year-old was caught on surveillance camera shortly before 10am on September 3 in a parking lot in Austin, Texas, US.

A man in an electric-powered wheelchair is seen making his way across the car park when a white pick-up truck speeds into frame.

He puts up his hand and waves at the driver to signal him to slow down.

But the driver runs him over, dragging him from the parking lot into the road and skipping a curb before speeding off.

As the driver took off, a passing Austin Fire Department truck spotted the incident and stopped to offer aid to the victim.

Officers from the fire department and police immediately transported the victim, who has not been identified, to a nearby hospital.

He was left with severe, life-threatening injuries, Austin Police said.

Avila-Banagas was arrested six days after the incident and was booked into Travis County Jail on Friday.

Elsewhere in Chicago, a mass shooting broke out in a park on Tuesday night (September 13) with witnesses saying they heard more than two dozen shots at that time.

One person died and six other people injured among the two groups that were involved in the shooting.

Deputy Chief Melean of the Chicago Police Department spoke to the media to give clarification that all casualties were adults, and that the shooting was unrelated to a circus in the area, with security patrolling the circus.

The incident reportedly took place around the same time a baseball game that was also taking place in the area.