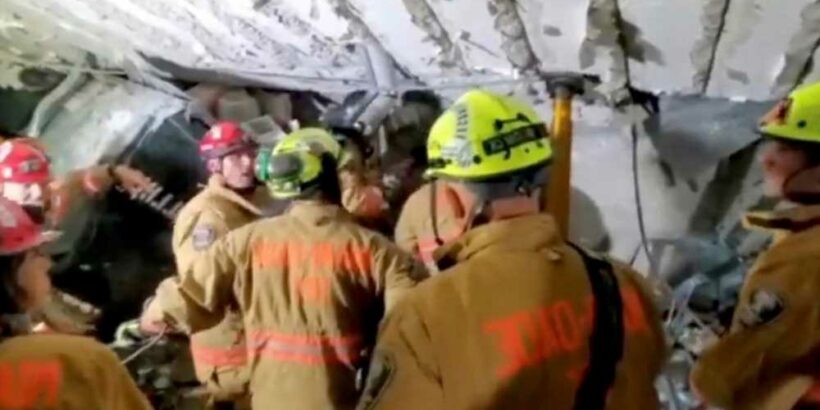 Dramatic dispatch calls in the chaotic aftermath of the deadly collapse of the Florida condo tower captured the moment a first responder spoke with a woman trapped between two beds.

“In communication with a victim who’s saying that there’s a total of three people that was in that apartment with her,” the rescuer is heard saying, WPLG reported.

Another first responder then says: “Special Ops, are all three people still with her or is she by herself?”

His fellow rescuer answers: “She’s stuck in between two beds right now. But her parents was (sic) also in the apartment. I don’t hear them.”

Other chilling audio reveals a first responder hearing a woman “banging on some debris. Seems like she’s pretty close to us.”

A first responder who asked not to be identified has told the news outlet, “Everybody that was there — that’s what we’re trying to do, get this lady out and comfort her.

“She was asking for help and she was pleading to be taken out of there. We were continuously talking to her … ‘Honey, we got you. We’re going to get to you,” he told WPLG.

“We did hear audible sounds and they were searching for a female voice for several hours and eventually we didn’t hear her voice anymore,” Cominsky said.

“Everyone that’s here on scene is trying to do the best we can with these heroic efforts. But, yes, unfortunately we didn’t have success with that,” he added.

Several more calls from the scene of the rubble described fires, possibly from a burning mattress, that forced crews to retreat.

“Stop operations. Remove everybody right now from the area. Come out,” a dispatcher alerted the crews.